Astronomers discover the largest structure in the universe

The large quasar group (LQG) is so large that it would take a vehicle traveling at the speed of light some 4 billion years to cross it.

An international team of astronomers, led by academics from the University of Central Lancashire (UCLan), has found the largest known structure in the universe. The large quasar group (LQG) is so large that it would take a vehicle travelling at the speed of light some 4 billion years to cross it. The team published their results in the journal Monthly Notices of the Royal Astronomical Society.

Quasars are the nuclei of galaxies from the early days of the universe that undergo brief periods of extremely high brightness that make them visible across huge distances. These periods are ‘brief’ in astrophysics terms but actually last 10-100 million years. 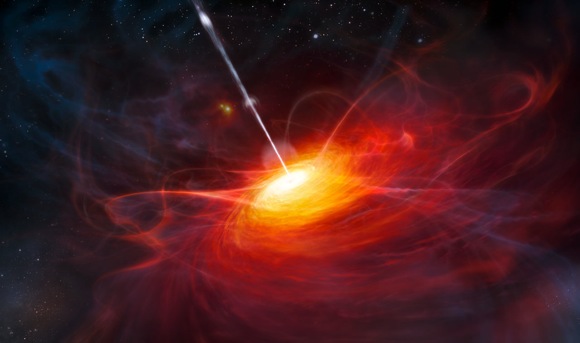 This artist’s impression shows how ULAS J1120+0641, a very distant quasar powered by a black hole with a mass two billion times that of the Sun, may have looked. This quasar is the most distant yet found and is seen as it was just 770 million years after the Big Bang. This object is by far the brightest object yet discovered in the early Universe. Credit: ESO/M. Kornmesser

Since 1982 it has been known that quasars tend to group together in clumps or ‘structures’ of surprisingly large sizes, forming large quasar groups or LQGs.

The team, led by Dr Roger Clowes from UCLan’s Jeremiah Horrocks Institute, has identified the LQG which is so significant in size it also challenges the Cosmological Principle: the assumption that the universe, when viewed at a sufficiently large scale, looks the same no matter where you are observing it from.

The modern theory of cosmology is based on the work of Albert Einstein, and depends on the assumption of the Cosmological Principle. The Principle is assumed but has never been demonstrated observationally ‘beyond reasonable doubt’.

To give some sense of scale, our galaxy, the Milky Way, is separated from its nearest neighbour, the Andromeda Galaxy, by about 0.75 Megaparsecs (Mpc) or 2.5 million light-years.

Whole clusters of galaxies can be 2-3 Mpc across but LQGs can be 200 Mpc or more across. Based on the Cosmological Principle and the modern theory of cosmology, calculations suggest that astrophysicists should not be able to find a structure larger than 370 Mpc.

Dr Clowes’ newly discovered LQG however has a typical dimension of 500 Mpc. But because it is elongated, its longest dimension is 1200 Mpc (or 4 billion light years) – some 1600 times larger than the distance from the Milky Way to Andromeda.

Dr Clowes said: “While it is difficult to fathom the scale of this LQG, we can say quite definitely it is the largest structure ever seen in the entire universe. This is hugely exciting — not least because it runs counter to our current understanding of the scale of the universe.

“Even travelling at the speed of light, it would take 4 billion light years to cross. This is significant not just because of its size but also because it challenges the Cosmological Principle, which has been widely accepted since Einstein. Our team has been looking at similar cases which add further weight to this challenge and we will be continuing to investigate these fascinating phenomena.”