Astronauts and cosmonauts call for global cooperation on asteroid threat

“Asteroid impacts have dramatically altered the course of life on Earth and a rogue asteroid will certainly strike Earth, posing a global threat to human life and society.” – Astronaut Tom Jones

At a public event Friday (October 25, 2013) at New York’s American Museum of Natural History, the Association of Space Explorers (ASE) – a professional society of astronauts and cosmonauts – issued a challenge to the global community to take the next vital steps to confront the threat from dangerous asteroids. Neil deGrasse Tyson, Director of the Frederick P. Rose Planetarium, moderated the event.

The ASE Committee on Near-Earth Objects statement follows the United Nations General Assembly adoption of a suite of proposals to create an international decision-making mechanism for planetary asteroid defense.

Five astronauts from three nations joined in a discussion of planetary defense from asteroids centering on the ASE statements. Speakers included: veteran US NASA Astronaut Tom Jones, current chairman of the ASE NEO Committee, and senior research scientist at the Florida Institute for Human and Machine Cognition; veteran US Apollo 9 Astronaut Rusty Schweickart, ASE founder and co-founder and chairman emeritus of B612 Foundation; Dumitru-Dorin Prunariu, veteran Romanian Astronaut and vice president of the European International Institute for Risk, Security and Communication Management; Soichi Noguchi, engineer and current Astronaut of the Japanese Space Agency, JAXA, and Dr. Edward Lu, veteran US NASA Astronaut, 7-month resident of the International Space Station (ISS) and co-founder and CEO of the B612 Foundation.

The ASE statement can be read in its entirety at b612foundation.org.

“Asteroid impacts have dramatically altered the course of life on Earth and a rogue asteroid will certainly strike Earth, posing a global threat to human life and society,” Astronaut Tom Jones stated in his opening remarks. “Search efforts to date have discovered scarcely 1% of potentially hazardous near-Earth objects (NEOs), and current telescopes were unable to warn us of the Feb. 2013 Chelyabinsk impact, which released 440 kilotons of explosive energy and injured more than 1,000 people. This leaves 99% of the objects big enough to level a major metropolitan area — undiscovered.” 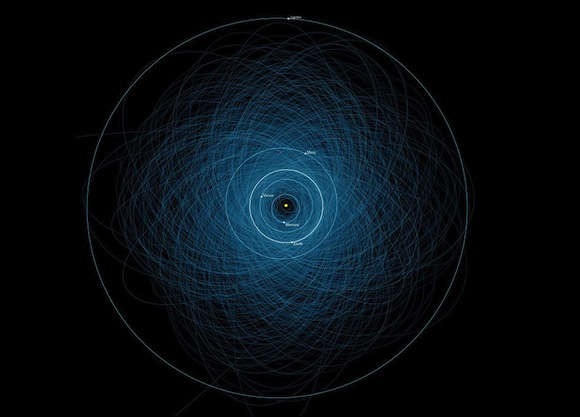 View larger. | This graphic shows the orbits of all the known Potentially Hazardous Asteroids (PHAs), numbering over 1,400 as of early 2013. Image via NASA

This week, the UN General Assembly approved concrete measures to help prevent asteroid disasters, as a result of discussions over 12 years by the UN Committee on the Peaceful Uses of Outer Space (COPUOS) and its Action Team 14 (AT-14) on Near-Earth Objects, comprised of scientific and space agency delegates from interested states and non-governmental organizations.

In 2008, ASE, an official observer at the COPUOS, with support from the Secure World Foundation, submitted to the UN a report entitled: Asteroid Threats: A Call for Global Response. The report recommended creation of an asteroid detection and warning network, a group to plan deflection missions, and an international group to oversee any needed deflection campaigns. This week the UN approved an International Asteroid Warning Network to share information on hazardous asteroid detections and impact predictions; a Space Missions Planning Advisory group to undertake joint studies of NEO deflection mission options, mission costs, and needed technologies, and a role for the UN COPUOS to consider and authorize any necessary NEO deflection campaigns.

At today’s October 25 event, the ASE challenged the global community to maintain this momentum with the following “next steps” for asteroid defense:

1. Called for the UN delegates to brief their respective national policymakers on the asteroid hazard and the latest General Assembly actions taken to prevent a NEO impact.
2. Called for national policy makers to address impact hazards in their disaster response plans and budgets.
3. Called for national governments to explicitly assign lead responsibility for asteroid hazard response to their space or disaster response agency, creating clear lines of responsibility.
4. To find the approximately one million NEOs capable of threatening Earth, called for national policymakers to commit the modest funds necessary to support the launch of a space-based search telescope by 2020.
5. Anticipating these search results, called for policy makers to direct their national space agencies to launch within ten years an international deflection demonstration, to alter the path of a small near-Earth asteroid.

Jones and the ASE Committee concluded: “Asteroids pose a significant, long-term threat to our civilization. Our society now possesses the knowledge, resources and technical acumen necessary to prevent them. With this week’s action by the UN General Assembly, our society has acknowledged the asteroid hazard and taken positive steps toward ensuring our species’ survival. However, knowing what we must do is only a first step. To prevent a future disaster, we must actually take action – in space.