Artificial sweeteners may do more than sweeten

Researchers have found that a popular artificial sweetener can modify how the body handles sugar.

In a small study, the researchers analyzed the sweetener sucralose (Splenda®) in 17 severely obese people who do not have diabetes and don’t use artificial sweeteners regularly.

“Our results indicate that this artificial sweetener is not inert — it does have an effect,” said first author M. Yanina Pepino, PhD, research assistant professor of medicine. “And we need to do more studies to determine whether this observation means long-term use could be harmful.”

The study is available online in the journal Diabetes Care. 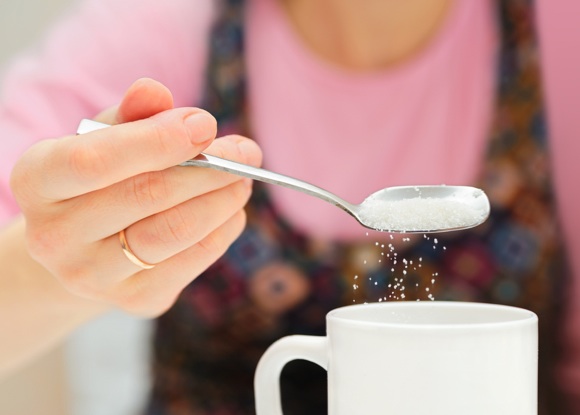 Pepino’s team studied people with an average body mass index (BMI) of just over 42; a person is considered obese when BMI reaches 30. The researchers gave subjects either water or sucralose to drink before they consumed a glucose challenge test. The glucose dosage is very similar to what a person might receive as part of a glucose-tolerance test. The researchers wanted to learn whether the combination of sucralose and glucose would affect insulin and blood sugar levels.

“We wanted to study this population because these sweeteners frequently are recommended to them as a way to make their diets healthier by limiting calorie intake,” Pepino said.

“When study participants drank sucralose, their blood sugar peaked at a higher level than when they drank only water before consuming glucose,” Pepino explained. “Insulin levels also rose about 20 percent higher. So the artificial sweetener was related to an enhanced blood insulin and glucose response.” 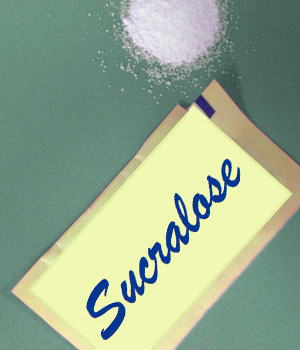 The popular artificial sweetener sucralose can modify how the body handles sugar.

The elevated insulin response could be a good thing, she pointed out, because it shows the person is able to make enough insulin to deal with spiking glucose levels. But it also might be bad because when people routinely secrete more insulin, they can become resistant to its effects, a path that leads to type 2 diabetes.

It has been thought that artificial sweeteners, such as sucralose, don’t have an effect on metabolism. They are used in such small quantities that they don’t increase calorie intake. Rather, the sweeteners react with receptors on the tongue to give people the sensation of tasting something sweet without the calories associated with natural sweeteners, such as table sugar.

But recent findings in animal studies suggest that some sweeteners may be doing more than just making foods and drinks taste sweeter. One finding indicates that the gastrointestinal tract and the pancreas can detect sweet foods and drinks with receptors that are virtually identical to those in the mouth. That causes an increased release of hormones, such as insulin. Some animal studies also have found that when receptors in the gut are activated by artificial sweeteners, the absorption of glucose also increases.

Pepino, who is part of Washington University’s Center for Human Nutrition, said those studies could help explain how sweeteners may affect metabolism, even at very low doses. But most human studies involving artificial sweeteners haven’t found comparable changes.

“Most of the studies of artificial sweeteners have been conducted in healthy, lean individuals,” Pepino said. “In many of these studies, the artificial sweetener is given by itself. But in real life, people rarely consume a sweetener by itself. They use it in their coffee or on breakfast cereal or when they want to sweeten some other food they are eating or drinking.”

Just how sucralose influences glucose and insulin levels in people who are obese is still somewhat of a mystery.

“Although we found that sucralose affects the glucose and insulin response to glucose ingestion, we don’t know the mechanism responsible,” said Pepino. “We have shown that sucralose is having an effect. In obese people without diabetes, we have shown sucralose is more than just something sweet that you put into your mouth with no other consequences.”

She said further studies are needed to learn more about the mechanism through which sucralose may influence glucose and insulin levels, as well as whether those changes are harmful. A 20 percent increase in insulin may or may not be clinically significant, she added.

“What these all mean for daily life scenarios is still unknown, but our findings are stressing the need for more studies,” she said. “Whether these acute effects of sucralose will influence how our bodies handle sugar in the long term is something we need to know.”

Via Washington University in St. Louis