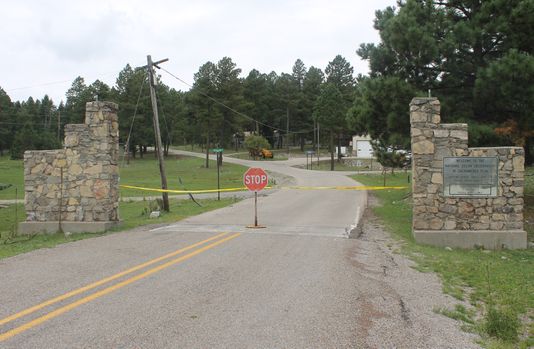 Stop sign and yellow crime scene tape at the entrance to the Sunspot Solar Observatory. Image via Dylan Taylor-Lehman/Daily News.

UPDATE SEPTEMBER 20, 2018. Reuters and other media are reporting that the mysterious 11-day closure of Sunspot Solar Observatory in New Mexico stemmed from an FBI investigation of a janitor suspected of using the facility’s wireless internet service to view and distribute child pornography. Federal court documents filed Wednesday, September 19, revealed this information. The suspect reportedly became “agitated,” leading to the closing of the observatory for the sake of staff safety. Read more from Reuters.

UPDATE SEPTEMBER 16, 2018: The Association of Universities for Research in Astronomy (AURA) issued the following statement about the status of the Sunspot Solar Observatory at Sacramento Peak, New Mexico. The observatory has been closed – and residents and staff have been asked to stay off the mountain – since September 6. The statement said Sunspot Solar Observatory will transition back to regular operations as of Monday, September 17. The AURA statement said:

On September 7, the Association of Universities for Research in Astronomy (AURA) and the National Science Foundation (NSF) made the decision to temporarily vacate the Sunspot Solar Observatory at Sacramento Peak, New Mexico, as a precautionary measure while addressing a security issue. The facility closed down in an orderly fashion and is now re-opening. The residents that vacated their homes will be returning to the site, and all employees will return to work this week.

AURA has been cooperating with an on-going law enforcement investigation of criminal activity that occurred at Sacramento Peak. During this time, we became concerned that a suspect in the investigation potentially posed a threat to the safety of local staff and residents. For this reason, AURA temporarily vacated the facility and ceased science activities at this location.

The decision to vacate was based on the logistical challenges associated with protecting personnel at such a remote location, and the need for expeditious response to the potential threat. AURA determined that moving the small number of on-site staff and residents off the mountain was the most prudent and effective action to ensure their safety.

In light of recent developments in the investigation, we have determined there is no risk to staff, and Sunspot Solar Observatory is transitioning back to regular operations as of September 17th. Given the significant amount of publicity the temporary closure has generated, and the consequent expectation of an unusual number of visitors to the site, we are temporarily engaging a security service while the facility returns to a normal working environment.

We recognize that the lack of communications while the facility was vacated was concerning and frustrating for some. However, our desire to provide additional information had to be balanced against the risk that, if spread at the time, the news would alert the suspect and impede the law enforcement investigation. That was a risk we could not take.

ORIGINAL STORY BEGINS HERE: Everyone loves a good mystery, and there is a very curious one happening in New Mexico right now. On Thursday, September 6, the Sunspot Solar Observatory in Sunspot, New Mexico, as well as a nearby United States Postal Service Office (USPS), was suddenly closed down and evacuated. This was reported to be for “security reasons,” but no details were provided, and still haven’t been at the time of this writing. Sunspot is located on Sacramento Peak – Lincoln National Forest specifically, in Otero County.

On KVIA, Shari Lifson, spokeswoman for the Association of Universities for Research in Astronomy (AURA) stated:

We have decided to temporarily vacate this facility as a precautionary measure. And we’re working with the proper authorities on this issue. 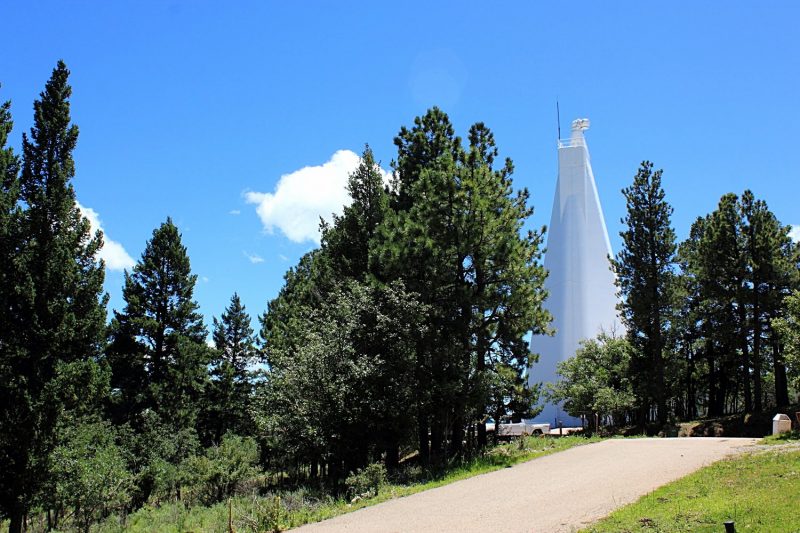 On Thursday, September 6th, AURA made the decision to temporarily close Sunspot. The Sunspot Solar Observatory continues to work closely with AURA in order to allow for us to reopen as soon as possible. With the excitement this closure has generated, we hope you will come and visit us when we do reopen, and see for yourself the services we provide for science and public outreach in heliophysics. If you have any questions about the science we perform at the telescope, or about the outreach we provide through our Visitors Center, please contact our Director, Dr. McAteer (mcateer@nmsu.edu).

Last Thursday, we got a phone call in the morning from AURA who told us to say that they were temporarily evacuating the site and asked us to evacuate our people. So, I called our people up and asked them to leave in a very sensible and calm manner and locked everything up. We’ve been out of there since Thursday morning. 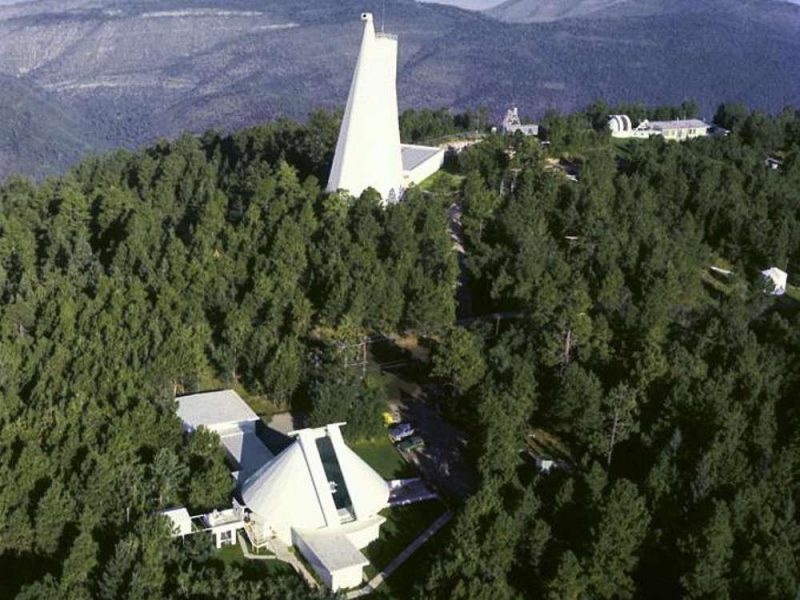 An aerial view of the facility at on Sacramento Peak. Image via National Science Foundation.

The incident has, of course, generated a lot of speculation as to what is going on, but with few details available, it is difficult to say anything for certain. It does appear to be a genuine event, given the local news coverage and notices on official websites. It is also, unsurprisingly, making the rounds in various conspiracy forums. Theories have ranged from a mercury storage leak to alien contact. The town of Sunspot itself is very small, and all 12-15 residents were evacuated, as well as four employees at the observatory, five or six employees of AURA and employees of the post office (number unknown).

What makes this intriguing is the reported involvement of the FBI. According to Otero County Sheriff Benny House:

The FBI is refusing to tell us what’s going on. We’ve got people up there (at Sunspot) that requested us to stand by while they evacuate it. Nobody would really elaborate on any of the circumstances as to why. The FBI were up there. What their purpose was nobody will say. But for the FBI to get involved that quick and be so secretive about it, there was a lot of stuff going on up there. There was a Blackhawk helicopter, a bunch of people around antennas and work crews on towers but nobody would tell us anything. 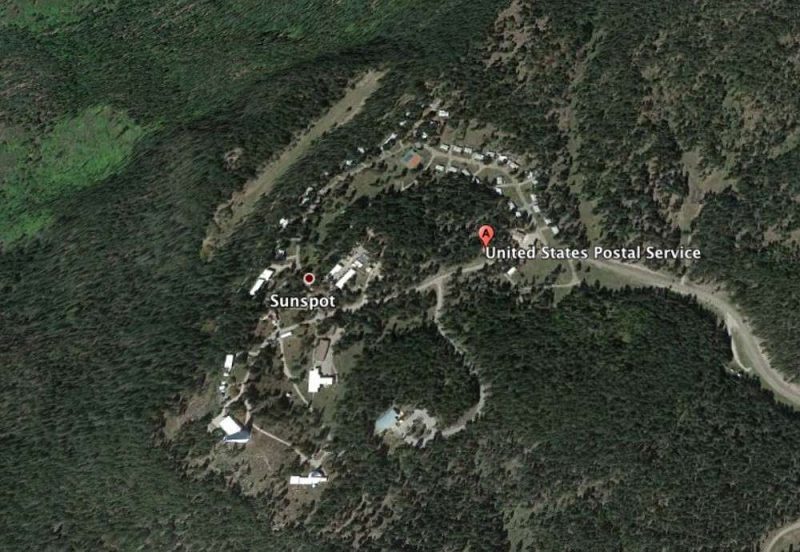 Another aerial view, showing location of observatory facility and the post office. Image via Google Earth.

House wants to know why the FBI had local law authorities help with the evacuation, but refused to tell them what it was about:

According to Rod Spurgeon, a spokesman with USPS:

Right now, what we’re told is that they’ve temporarily evacuated the area. We haven’t been told why or when that expires. 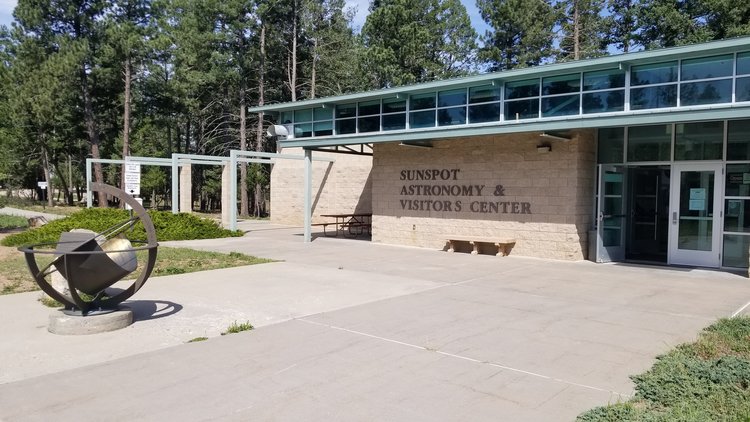 So what actually happened? Some of the more plausible theories have included some kind of spying incident or attempt from a hostile country or group (given the reports of people working on the antennas and towers), a possible terrorist plot or an accident involving the mercury stored beneath the facility. But would a mercury spill require the FBI to be involved? Conspiracy theories have ranged from an impending major solar flare event to aliens. A new article on The War Zone makes the case for espionage. The observatory is also fairly close to Holloman Air Force Base and White Sands Missile Range, lending credibility to that possibility.

As reported in Alamogordo Daily News on September 13, 2018, the cause for the closure was not a mercury spill. According to McAteer:

There’s no mercury incident. That’s a completely different set of protocols that would not have involved them locking all the doors. We have a very regular maintenance routine. There is no cause for concern there.

A statement purportedly from an astronomer, posted on Reddit, says that an announcement from AURA will be coming soon. In the meantime, the rumor mill will continue to churn.

Via Alamogordo Daily News and KVIA