What causes landslides and mudslides?

The trigger is usually water. Excessive rainfall can trigger landslides and mudslides because it’s heavy and adds extra weight to the land. 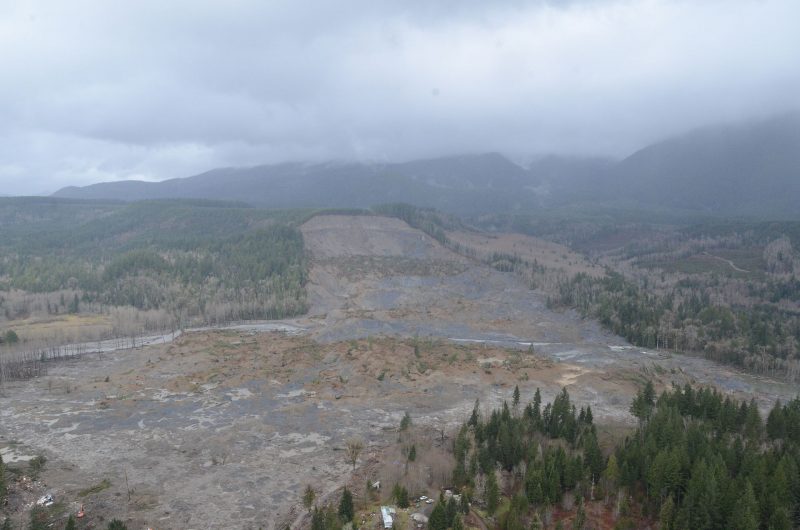 A view from a Washington Army National Guard helicopter showing the aftermath of the March 22, 2014, mudslide in Oso, Washington, more than a week after it occurred. Image via DVIDS.

The terms landslide or mudslide refer to the downward movement of large masses of rocks, soil, mud and organic debris. Areas with steep slopes, for example mountainous regions, are particularly susceptible to landslide hazards. Most landslides are caused by multiple factors that act together to destabilize the slope.

The primary cause of a landslide is the influence of gravity acting on weakened materials that make up a sloping area of land. While some landslides occur slowly over time (e.g., land movement on the order of a few meters/yards per month), the most destructive ones happen suddenly after a triggering event such as heavy rainfall or an earthquake.

That was the case for the last extremely deadly mudslide in the continental U.S., the 2014 Oso mudslide, which took 43 lives and destroyed 49 homes and other structures. A portion of an unstable hill collapsed, sending mud and debris to the south across the North Fork of the Stillaguamish River, engulfing a rural neighborhood. Prior to the slide, the Oso area – which is about 55 miles northeast of Seattle – had had heavy rainfall during the previous 45 days, up to 261 percent of normal, by some sources. 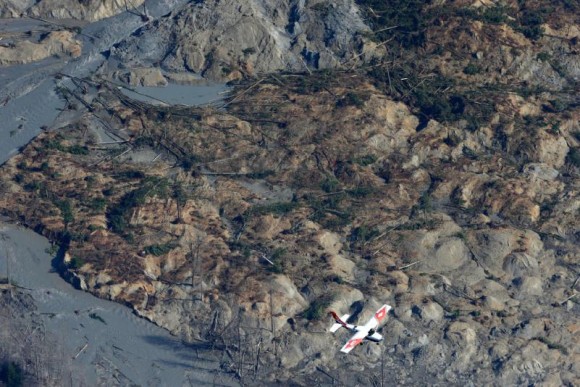 The Oso, Washington, mudslide as viewed from the air on March 24, 2014. Photo by Ted S. Warren/Concord Monitor. Experts said that the primary reason for the Oso mudslide was rain.

Water can trigger landslides and mudslides because it alters the pressure within the slope, which leads to slope instability. Consequently, the heavy water-laden slope materials (soil, rock, etc.) will succumb to the forces of gravity. Excessive water is thought to be one of the most common triggers for landslides.

Other factors that weaken slope materials also contribute to the occurrence of landslides. These factors include both natural events such as geological weathering and erosion and human-related activities such as deforestation and changes made to the flow of groundwater. Destruction of vegetation by droughts, fires, and logging has been associated with increased risk for landslides. 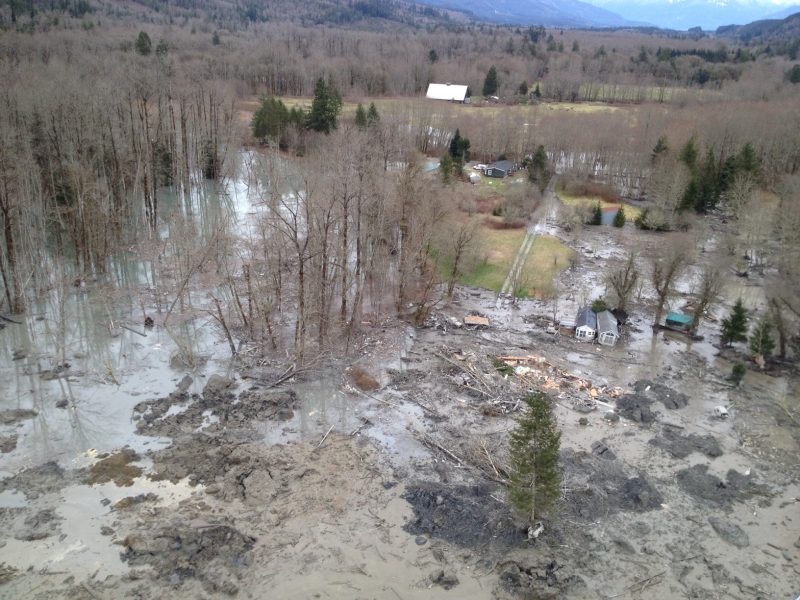 Aerial view of the Oso area shortly after the March 22, 2014, mudslide. The slide covered about a 1-square-mile (2.6-square-km) area. Image via U.S. Navy/Wikimedia Commons.

Landslides are classified according to the type of material that falls and how that material moves downslope. For example, there are rock falls, mudslides, and debris flows. All of these terms represent a type of landslide.

One particularly destructive type of landslide is known as a lahar. Lahars are volcanic mud flows or debris flows that are capable of traveling at very fast speeds down the slope of a volcano.

The Landslide Handbook – A Guide to Understanding Landslides is a great resource from the U.S. Geological Survey for those who want to learn more about landslides. 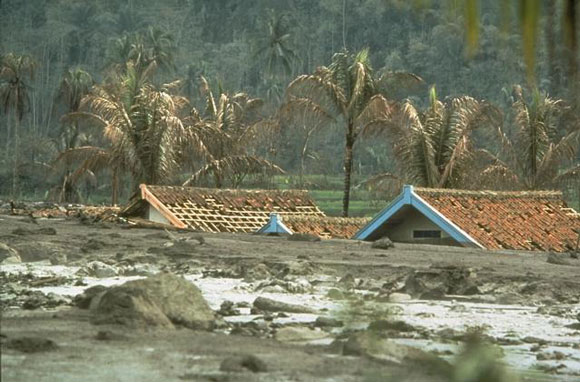 A lahar resulting from a 1982 eruption of the Galunggung volcano in Indonesia. Image via Robin Holcomb, U.S. Geological Survey.

Bottom line: Landslides are mainly caused by gravity acting on weakened rocks and soil that make up a sloping area of land. Both natural and human-related activities can increase the risk for landslides. Water from heavy rainfall is a frequent trigger for landslides.