The circadian clock in your gut

Our internal circadian clock tells our body when to sleep, wake and eat. New research says that bacteria living in our gut also have their own circadian clocks. 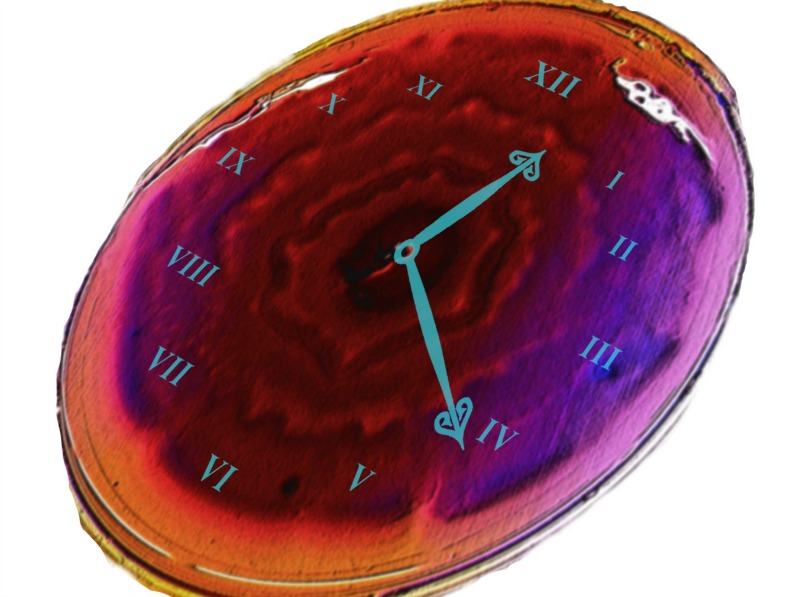 A plate of Enterobacter aerogenes showing the bulls-eye pattern of swarming underneath a stylized clock face. Image via Jiffin Paulose.

Our circadian clock is an internal mechanism that coordinates our biology and behavior with daily changes in the day/night cycle. It’s a group of nerve cells in our brain that help tell our bodies when to sleep, wake and eat. Now, researchers say that bacteria living in our gut also have their own circadian clocks. That’s according to a study published in the journal PLOS ONE in January, 2016.

Jiffin Paulose is a post-doctoral scholar at the University of Kentucky and a study co-author. Paulose said in a statement:

We are the directors of that clock, much like the sun directs our own circadian rhythms.

The researchers found that a certain class of bacteria found in the human gastrointestinal (GI) system, called Enterobacter aerogenes, expresses circadian patterns because of its sensitivity to melatonin, the hormone our bodies produce at night that stimulates sleep.

In our bodies, melatonin is made by the pineal gland, a small gland in the brain. But we also have melatonin throughout our gut, and many foods contain melatonin. The GI system’s circadian clock, say the researchers, is coordinated to both light and the timing of eating.

The study found that when the bacteria cells were exposed to melatonin at levels similar to those found in the gut, they began to communicate with each other and coordinate periods of swimming and dividing in a phenomenon known as swarming. Paulose said:

This swarming in the presence of melatonin occurs every 24 hours and keyed us toward finding the circadian clock.

Their researchers say that their findings suggest that the overall circadian organization in vertebrates might be an arrangement of multiple circadian pacemakers that are organized in a hierarchical system of clocks. Paulose said now they must consider the bacteria that coexist within the body as part of that hierarchy.

Not only are we sending signals (like melatonin) to the bacteria in our guts, mouths, skin, etc., but they are also sending signals back that affect us; from the molecular level all the way up to our behavior. The biological and clinical significance of this grand scale of circadian coordination will be important to discover in the very near future.

Bottom line: Researchers say that bacteria living in our gut have their own circadian clocks.

Read more from the University of Kentucky