A new study suggests a series of supernovae – peaking 2.6 million years ago – might have triggered earthly events that promoted proto-humans’ upright walking.

A new study suggests that ancient supernovae might have induced proto-humans to walk on two legs.

According to the paper, published May 28, 2019, in the Journal of Geology, supernovae bombarded Earth with cosmic energy starting as many as 8 million years ago, with a peak some 2.6 million years ago that initiated an avalanche of electrons in our planet’s lower atmosphere.

The authors believe atmospheric ionization triggered an enormous upsurge in cloud-to-ground lightning strikes that ignited forest fires around the globe. These infernos could be one reason, the researchers say, that ancestors of Homo sapiens developed bipedalism — that is, walking on two legs – to adapt in savannas that replaced torched forests in northeast Africa. 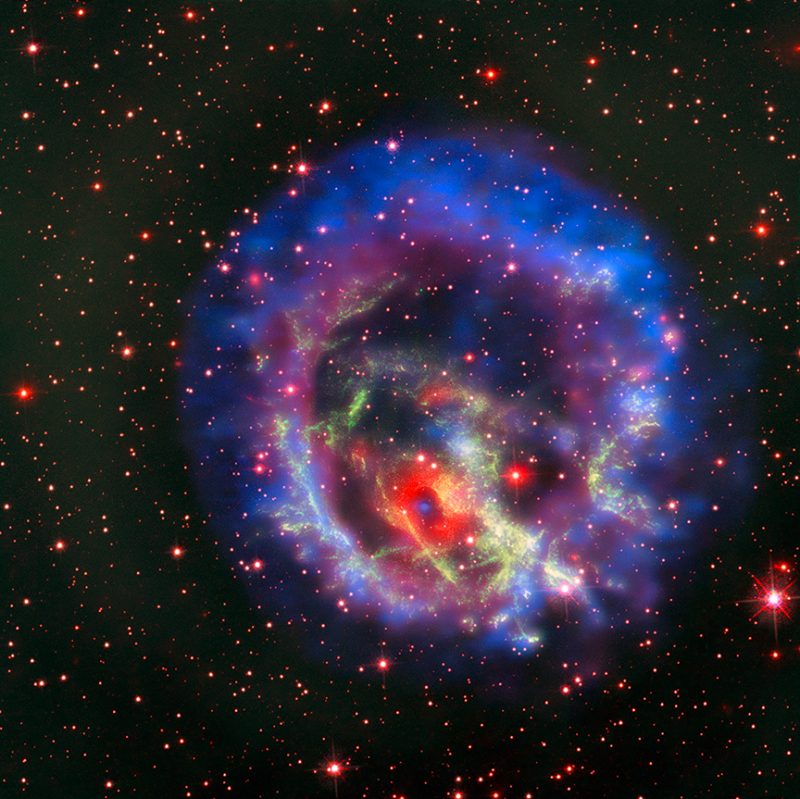 A composite image of a supernova. Image via Chandra.

Adrian Melott, professor emeritus of physics and astronomy at the University of Kansas, is lead author of the study. Melott said in a statement:

It is thought there was already some tendency for hominins to walk on two legs, even before this event. But they were mainly adapted for climbing around in trees. After this conversion to savanna, they would much more often have to walk from one tree to another across the grassland, and so they become better at walking upright. They could see over the tops of grass and watch for predators. It’s thought this conversion to savanna contributed to bipedalism as it became more and more dominant in human ancestors.

Based on a telltale layer of iron-60 deposits lining the world’s sea beds, astronomers have high confidence that supernovae exploded in Earth’s immediate cosmic neighborhood — between 100 and only 50 parsecs (163 light-years) away — during the transition from the Pliocene Epoch to the Ice Age. Melott said:

We calculated the ionization of the atmosphere from cosmic rays which would come from a supernova about as far away as the iron-60 deposits indicate. It appears that this was the closest one in a much longer series. We contend it would increase the ionization of the lower atmosphere by 50-fold. Usually, you don’t get lower-atmosphere ionization because cosmic rays don’t penetrate that far, but the more energetic ones from supernovae come right down to the surface – so there would be a lot of electrons being knocked out of the atmosphere.

According to the study authors, ionization in the lower atmosphere meant an abundance of electrons would form more pathways for lightning strikes. Melott said:

The bottom mile or so of atmosphere gets affected in ways it normally never does. When high-energy cosmic rays hit atoms and molecules in the atmosphere, they knock electrons out of them — so these electrons are running around loose instead of bound to atoms. Ordinarily, in the lightning process, there’s a buildup of voltage between clouds or the clouds and the ground – but current can’t flow because not enough electrons are around to carry it. So, it has to build up high voltage before electrons start moving. Once they’re moving, electrons knock more electrons out of more atoms, and it builds to a lightning bolt. But with this ionization, that process can get started a lot more easily, so there would be a lot more lightning bolts.

Melott said the probability that this lightning spike touched off a worldwide upsurge in wildfires is supported by the discovery of carbon deposits found in soils that correspond with the timing of the cosmic-ray bombardment. He said:

The observation is that there’s a lot more charcoal and soot in the world starting a few million years ago. It’s all over the place, and nobody has any explanation for why it would have happened all over the world in different climate zones. This could be an explanation. That increase in fires is thought to have stimulated the transition from woodland to savanna in a lot of places – where you had forests, now you had mostly open grassland with shrubby things here and there. That’s thought to be related to human evolution in northeast Africa. Specifically, in the Great Rift Valley where you get all these hominin fossils.

Bottom line: A scientist explains how a series of supernovae – peaking 2.6 million years ago – might have triggered earthly events that promoted proto-humans’ upright walking.