Manslaughter conviction for seven in Italy for no earthquake warning

Can earthquakes be predicted? No. That is why scientists around world are aghast at conviction in Italy of six scientists, who failed to predict deadly 2009 earthquake.

Scientists around the world are expressing dismay over the ruling on Monday, October 22, 2012 by an Italian court to convict six scientists and a government official on manslaughter charges for failing to give sufficient warning of a 2009 earthquake. More than 300 people were killed in the earthquake, whose main shock struck the city of L’Aquila in central Italy at 3:32 a.m. local time (1:32 UTC) on April 6, 2009 after many foreshocks. Apparently, the court felt the scientists had underestimated the risks of the foreshocks and had not sufficiently warned the public. Meanwhile, seismologists and other earthquake experts around the world simply say that earthquakes cannot be predicted.

The court in L’Aquila sentenced the scientists and a government official Monday to six years in prison, ruling that they didn’t accurately communicate the risk of the earthquake. Each person convicted is a member of the national Great Risks Commission in Italy. The convictions aren’t definitive until after at least one level of appeals, so it is unlikely any of the defendants would face jail immediately.

In the world of science, this case is about earthquake prediction, which is not possible. But Italian authorities say the case is about failure to warn. According to the BBC:

… the authorities who pursued the seven defendants stressed that the case was never about the power of prediction – it was about what was interpreted to be an inadequate characterisation of the risks; of being misleadingly reassuring about the dangers that faced their city. 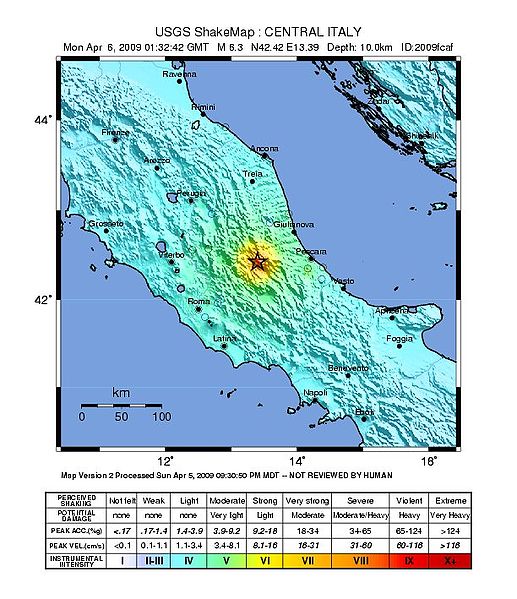 Intensity scale for April 6, 2009 earthquake in Italy. It would be considered a moderate earthquake for an earthquake prone area, such as Japan, where buildings are constructed to withstand such shocks. Image via USGS

Can large earthquakes be predicted from foreshocks? Scientists agree the answer is no. In fact – as earthquakes are occurring, until after a main shock has occurred – it’s impossible to tell which are the foreshocks, and which are the aftershocks. The largest quake is the marker. All the smaller quakes leading up to it are later called foreshocks. The ones following are called aftershocks. You can only know which is which in hindsight.

Read more: Is it possible to predict earthquakes?

That is why scientists around the world are aghast at this conviction, which was said to be of some of Italy’s most prominent and internationally respected seismologists and geological experts. Enzo Boschi, former head of the national Institute of Geophysics and Volcanology, told Associated Press:

I am dejected, desperate. I thought I would have been acquitted. I still don’t understand what I was convicted of.

Read more from AP about the conviction 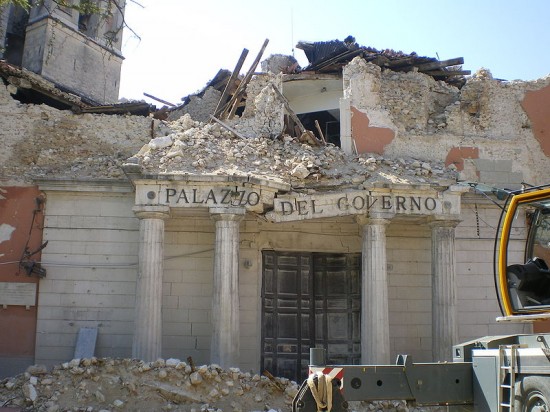 The main shock of the April 6, 2009 quake in Italy was rated 5.8 magnitude on the Richter scale, which might be considered a moderate quake for an earthquake-prone area such as Japan, whose buildings are constructed to withstand such shocks. By contrast, on Friday, March 11, 2011, the Tohoku earthquake in Japan was rated a magnitude 9. The 2011 Tohoku quake – the most powerful known earthquake ever to have hit Japan, and one of the five most powerful earthquakes in the world since modern record-keeping began in 1900 – killed more than 15,000 people.

Bottom line: On Monday, October 21, 2012, six scientists and one government official were convicted of manslaughter in Italy for failing to predict a 2009 earthquake in which more than 300 people were killed. However, scientists around the world agree that earthquakes cannot be predicted.