Three American scientists share the 2017 Nobel Prize in Physiology or Medicine for work that explained how our cells keep track of time.

Circadian rhythms control when we’re at our peak performance physically and mentally each day, keeping our lives ticking in time with Earth’s day/night cycle. This year’s Nobel Prize in Physiology or Medicine was awarded to three American scientists, Jeffrey Hall and Michael Rosbash of Brandeis University and Michael Young of Rockefeller University, for shedding light on how time is measured each day in biological systems, including our own bodies.

From Darwin’s finches on the Galápagos Islands to modern city dwellers, organisms adapt to their environment. Regular 24-hour cycles of day and night on Earth led to the evolution of biological clocks that reside within our cells. These clocks help us unconsciously pick the best time to rest, search for food, or anticipate danger or predation.

The field of modern circadian biology got its start in the 1970s, when geneticist Seymour Benzer and his student Ron Konopka undertook a revolutionary study to track down the genes that encode biological timing in fruit flies. With that gene in their sights, the labs of Hall, Rosbash and Young ushered in the molecular era of circadian biology as they untangled the molecular mechanisms of biological timekeeping.

Drosophila larvae were the lab subject for the early circadian clock research. Image via IrinaK/Shutterstock.com.

To get started, Benzer and Konopka performed a simple experiment: tracking when the fruit fly Drosophila melanogaster would emerge from its pupal case. This developmental process, called eclosion, served as a powerful tool to study the complicated biological process of circadian rhythms. Because Drosophila pupae emerge only at a specific time of the day, Konopka could measure the timing between rounds of eclosion for different strains of flies and identify those that had a bad clock. By isolating fly strains with timing problems, they hoped to be able to zero in on the relevant genes that controlled this internal clock.

In the end, Konopka found three mutant strains: one that had a short, 19-hour day; one with a long, 28-hour day; and one mutant that appeared to have no clock at all. Using genetic tools, he was able to show that each of the responsible mutations lay remarkably close on the same chromosome, suggesting that they were all located within a single gene, which Benzer and Konopka named period for its apparent control over clock timing.

Then the race was on, and in 1984, two teams finally identified this so-called clock gene period in flies: the labs of Jeffrey Hall and Michael Rosbash working in close collaboration at Brandeis, and Michael Young’s lab at Rockefeller.

With the gene in hand, these groups then aimed to figure out how period fit into a biological clock. The first clue came when Jeffrey Hall and Michael Rosbash discovered that the protein encoded by this gene (called PER) increased during the night and decreased during the day, suggesting that levels of the protein might somehow communicate time information to the rest of the cell.

If you just imagine how a biological clock might best keep track of time over a day, you might jump to a mental picture of an hourglass timer. Sand gradually disappears over time; when all the sand is gone, it could signal the process to begin again. Was PER the substance that kept biological time by gradually changing throughout the day?

One key insight came when Hall and Rosbash reasoned that this PER protein might actually block the activity of the period gene, turning itself off each day. As levels of PER build up over the course of the night, less and less new PER protein would be made. Eventually the protein levels drop and the process starts over again. This is called a negative feedback loop. It’s the same type of biological balancing act that keeps everything from your blood sugar levels to your circadian rhythms in line throughout your body.

Now imagine having to repeat this process over and over each day with nearly exact timing. Biological clocks use negative feedback from clock proteins like period to turn themselves on and off again each 24 hours. Additional studies in the Young lab identified other key genes – dubbed Timeless and Double-Time – that fit into this puzzle by controlling how PER travels around the cell to turn itself off each day. 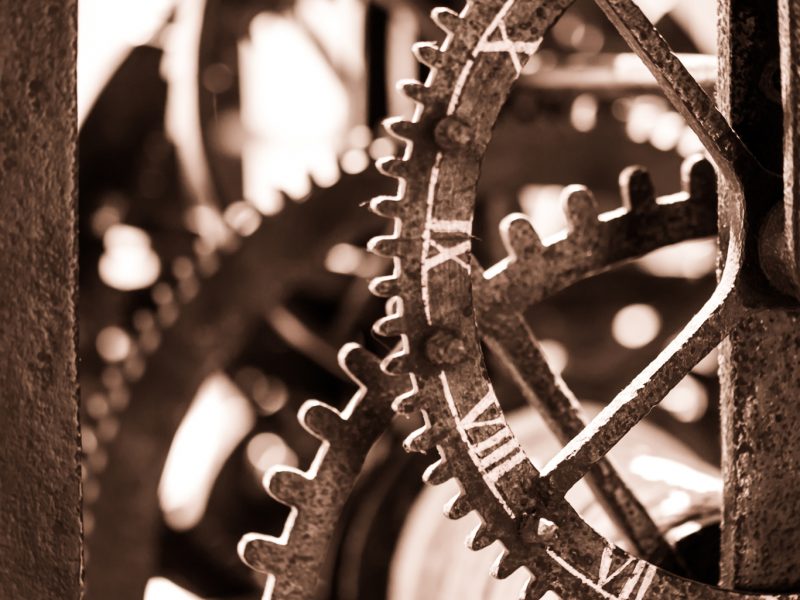 Piece by piece, starting to understand the biological mechanisms of our living clockworks. Image via William Warby.

Fitting the cogs together into molecular clocks

Work over the last two decades has rounded out a much deeper understanding of circadian rhythms to show how most organisms have clocks based on feedback loops similar to Drosophila. Rosbash’s lab identified part of the PER protein known as the PAS domains that we now find in many clock proteins from fungi and plants to humans. PAS domains help clock proteins like PER pair up with their partners to control the negative feedback loop.

By comparing differences in the structures of PER PAS domains of Drosophila and mice, scientists are now beginning to learn how the protein “cogs” of the molecular clock fit together to tell time. Understanding circadian rhythms at atomic resolution like this allows us to explain how newly identified mutations in PER lead to changes in clock timing and open the door to therapeutics that could harness the power of circadian rhythms to improve human health.

Living with your clock and its natural rhythms

We now have a much greater appreciation for the central role that circadian rhythms play in coordinating our lives with Earth’s day, controlling everything from your metabolism to the timing of sleep. Young’s lab recently identified a prevalent mutation in a human clock gene, cryptochrome 1, that lengthens the cellular clock and makes it difficult to get to bed before midnight. This inherited “night owl” gene is estimated to be pretty common, found in nearly 1 out of 75 of us.

Understanding the powerful regulation of biology by circadian rhythms is beginning to lead to far-reaching changes in policy. For example, rather than arbitrarily forcing our sleep schedules into routines that require early morning wake times, some researchers are showing that adjusting our schedules to fit our natural rhythms may pay off at work and school. This is particularly true for adolescents, who have a natural “night owl” tendancy – delaying school start times by even just one hour can significantly improve academic performance.

The science is now far enough along in our understanding of circadian clocks that researchers are working to optimize work and sleep schedules with our biology in mind. And all these policy innovations are built on the foundation of the Nobel Prize-winning research with those tiny fruit flies.