Meet the microbiome: Learning to love your inner cooties

They aren’t just found on trash cans, toilets, and infrequently laundered lab coats. Trillions of microbes also reside, quite harmoniously, in and on our bodies.

Society’s view of microbes has come a long way. For much of human history we lived in ignorance of their existence or denial that they had any bearing on our health. Doctors went from autopsying cadavers right to delivering babies with only the most rude and contentious ingrates suggesting that they might wash their hands first. Once the germ theory of disease was accepted, microorganisms became the enemy – carriers of pestilence to be eradicated with soap and antibiotics and antibacterial wipes. Our current understanding is more complex. Some microbes make us sick, but others are essential to keeping us healthy.

Accordingly, scientific focus on microbes has gone from killing to cataloguing, and attention has also turned inward. Because bacteria and their ilk aren’t just found on trash cans, toilets, and infrequently laundered lab coats. Trillions of them also reside, quite harmoniously, in and on our bodies. These human-housed microbes and their genes are collectively known as the human microbiome, and researchers are hopeful that categorizing healthy microbiomes may someday help us understand how our internal microbes affect health issues from cancer to psoriasis to obesity.

Here in the United States*, the Human Microbiome Project (HMP) is the loftiest such effort to date, and they just dumped a bucket load of data into the journal Nature along with a smattering of related reports published in PLoS ONE. And that’s only the beginning.

Microbes in our bodies (a population largely composed of bacteria, but also including yeasts, fungi and viruses) outnumber our own human cells by a factor of ten. That’s roughly 100 trillion microbes to the humble 10 trillion human cells.

Since microorganisms are considerably smaller than human cells†, they’re not as impressive by weight. A 200-lb adult is estimated to hold somewhere between 2-5 pounds of microbes. However, note that an adult human brain weighs in at about 3 pounds, so there’s a good chance that, in terms of mass, you’re more bacteria than brain.

Microbes beat out human cells in diversity as well. The entire human genome consists of a meager 20,000-25,000 genes. The human microbiome on the other hand is at 8 million genes and counting.

The HMP – which is funded by the U.S. National Institutes of Health (NIH) and involves some 200 scientists from 80 different institutions – has been underway for nearly five years, spending $170 million dollars in the process (hey, it’s still less than $0.000002 per microbe in the human body.)

Their survey of the human microbiome gathered and analyzed samples from 242 healthy adult subjects at 15-18 body sites (15 for males, 18 for female) on the skin, nose, mouth, throat, gut, and (for those possessing one) the vagina. This was done on up to 3 separate occasions, generating a whopping 11,174 total samples.

Lots and lots of different microbes…

What it all means

It means there’s a gargantuan quantity and variety of microbes shacking up in your body. What? You wanted more? Fine, I’ll see what I can do.

The problem with this kind of ambitious research is that it tends to raise as many questions as it answers. Having identified a bunch of microbes doesn’t simultaneously tell us what each one is doing there. 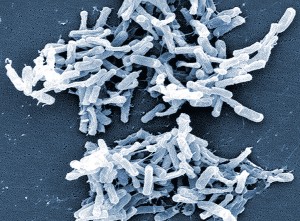 Certainly one benefit of the human microbiome is that it populates the sought-after real estate of our bodies, preventing harmful microorganisms from moving in. The importance of this becomes evident in instances when antibiotics inadvertently knock out healthy gut bacteria along with their intended targets. With the friendly microbes depleted, harmful bacteria like hospital scourge Clostridium difficile can take over and devastate the intestinal tract.

But microbes do more than just take up space. They are also thought to actively aid in metabolic and immune function and other vital bodily chores. Much remains unknown as to the daily lives of many of these microorganisms. What tasks do they perform? Which microbes are essential? Which are redundant? Which are replaceable?

And with so much variation found between their subjects (not to mention the fact that a North American subject base is likely unrepresentative of a full human microbiome) establishing the hallmarks of a “normal” microbiome against which to compare less healthy subjects – a major goal of such cataloging – isn’t a simple task.

Variation over time within individuals may also prove important. Microbial environments varied from one subject to another (i.e., different species found in mouth of Subject A vs. mouth of Subject B), and also from body site to body site (different species found in Subject A’s mouth than on his/her elbow). However samples taken from the same site and the same individual on different days were pretty consistent, suggesting that a healthy microbiome may be fairly stable from day to day.

An intriguing exception to this consistency is the vaginal microbiome, which changes during pregnancy. During this time, overall diversity declines but there is also an increase in the species Lactobacillus johnsonii, which is typically more common in the upper gastrointestinal tract. This is worth noting given the recent ado made over a study correlating C-section delivery with childhood obesity. Babies do begin their lives with a pretty uniform array of microbes picked up from mom – mostly vaginal bacteria if delivered vaginally, mostly skin bacteria if by C-section. However, these starter colonies eventually diversify and specialize, and it’s possible that resulting adult microbiomes are also guided by diet, environment, genetics, or all of the above. The C-section study didn’t examine the tubbier toddlers’ microbial communities, so that connection remains in the realm of speculation.

In a broader sense, the HMP is also an indication that science (and medicine) may be rethinking its approach to disease. Gaining a better understanding of what makes up a healthy microbiome may enable us to move away from bombarding pathogenic microbes with medication and toward cultivating the body’s beneficial microbes. Scientists are increasingly viewing the human body as a complex ecosystem whose balance must be preserved for ideal health. In an era of growing antibiotic resistance, that sounds like a fabulous plan. However…

Don’t get your hopes up

You shouldn’t expect to see medical applications from this research overnight. The current interest in the human microbiome has been accompanied by increased sales in over-the-counter probiotic remedies, yet actual research on the efficacy of these products is scant. Repairing our internal microbial environment may not be as simple as eating a cup of yogurt for breakfast, and it won’t always make for pleasant breakfast conversation either. One of the more promising treatments for resistant C. difficile infection is something called faecal transplantation. It’s pretty much what it sounds like. A stool sample from a donor with healthy gut microbes is diluted and inserted into the gut of a patient whose normal gut flora been depleted by pathogenic bacteria. Anecdotally it seems to work (and without side effects, unlike antibiotics), but here too we’re sorely lacking in clinical trials. Canada has begun more rigorous testing of the procedure, but the U.S. is still mostly wrinkling its nose at the idea.

In any event, it’s going to take some time. Remember all the excitement in 2001 over the Human Genome Project? That was the year the first draft of the human DNA sequence was published, and everyone from journalists to politicians were jumping up and down about how this breakthrough was going to change medicine and turn ordinary citizens into disease-proof superheroes. A decade down the line many such projections have failed to come true and society is waxing ambivalent over genomic medicine. Let’s not do the same thing with the HMP. Learning about the microbiome isn’t going to fix everything, and it’s not going to fix it by next week or even next year, so be patient. But maybe I’m being too drearily realistic. Prove me wrong, science! Let’s have those miracle microbes on the shelves in time for Christmas. Go teem?

* The European Commission and China have their own project: the Metagenomics of the Human Intestinal Tract (MetaHIT)

† You can take an interactive tour of cell and microbe sizes here. You may need to download a Flash plug-in to run this, but it’s totally worth it. It’s like Google Earth for microbes.