Do you have a magnetic compass in your head?

New evidence suggests that humans have a magnetic sense that lets our brains detect and respond to Earth’s magnetic field. 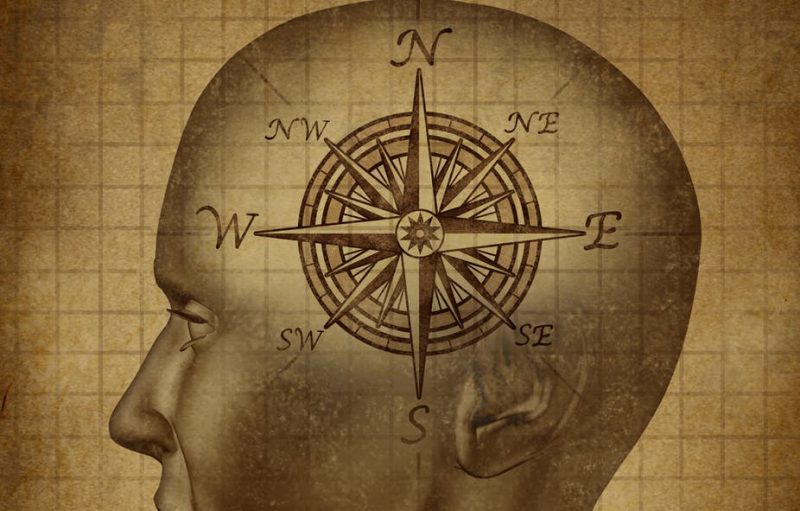 Do human beings have a magnetic sense? Biologists know other animals do. They think it helps creatures including bees, turtles and birds navigate through the world.

Scientists have tried to investigate whether humans belong on the list of magnetically sensitive organisms. For decades, there’s been a back-and-forth between positive reports and failures to demonstrate the trait in people, with seemingly endless controversy.

The mixed results in people may be due to the fact that virtually all past studies relied on behavioral decisions from the participants. If human beings do possess a magnetic sense, daily experience suggests that it would be very weak or deeply subconscious. Such faint impressions could easily be misinterpreted – or just plain missed – when trying to make decisions.

So our research group – including a geophysical biologist, a cognitive neuroscientist and a neuroengineer – took another approach. What we found arguably provides the first concrete neuroscientific evidence that humans do have a geomagnetic sense. 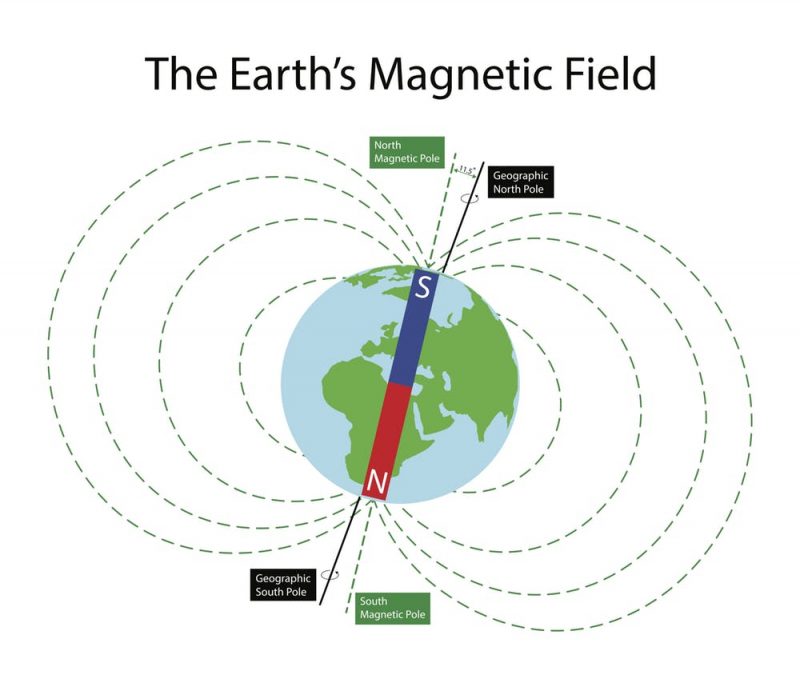 Life on Earth is exposed to the planet’s ever-present geomagnetic field that varies in intensity and direction across the planetary surface. Image via Nasky/Shutterstock.com.

How does a biological geomagnetic sense work?

The Earth is surrounded by a magnetic field, generated by the movement of the planet’s liquid core. It’s why a magnetic compass points north. At Earth’s surface, this magnetic field is fairly weak, about 100 times weaker than that of a refrigerator magnet.

Over the past 50 years or so, scientists have shown that hundreds of organisms in nearly all branches of the bacterial, protist and animal kingdoms have the ability to detect and respond to this geomagnetic field. In some animals – such as honey bees – the geomagnetic behavioral responses are as strong as the responses to light, odor or touch. Biologists have identified strong responses in vertebrates ranging from fish, amphibians, reptiles, numerous birds and a diverse variety of mammals including whales, rodents, bats, cows and dogs – the last of which can be trained to find a hidden bar magnet. In all of these cases, the animals are using the geomagnetic field as components of their homing and navigation abilities, along with other cues like sight, smell and hearing.

Skeptics dismissed early reports of these responses, largely because there didn’t seem to be a biophysical mechanism that could translate the Earth’s weak geomagnetic field into strong neural signals. This view was dramatically changed by the discovery that living cells have the ability to build nanocrystals of the ferromagnetic mineral magnetite – basically, tiny iron magnets. Biogenic crystals of magnetite were first seen in the teeth of one group of mollusks, later in bacteria, and then in a variety of other organisms ranging from protists and animals such as insects, fish and mammals, including within tissues of the human brain.

Chains of magnetosomes from a sockeye salmon. Image via Mann, Sparks, Walker & Kirschvink, 1988.

In our new study, we asked 34 participants simply to sit in our testing chamber while we directly recorded electrical activity in their brains with electroencephalography (EEG). Our modified Faraday cage included a set of 3-axis coils that let us create controlled magnetic fields of high uniformity via electric current we ran through its wires. Since we live in mid-latitudes of the Northern Hemisphere, the environmental magnetic field in our lab dips downwards to the north at about 60 degrees from horizontal. 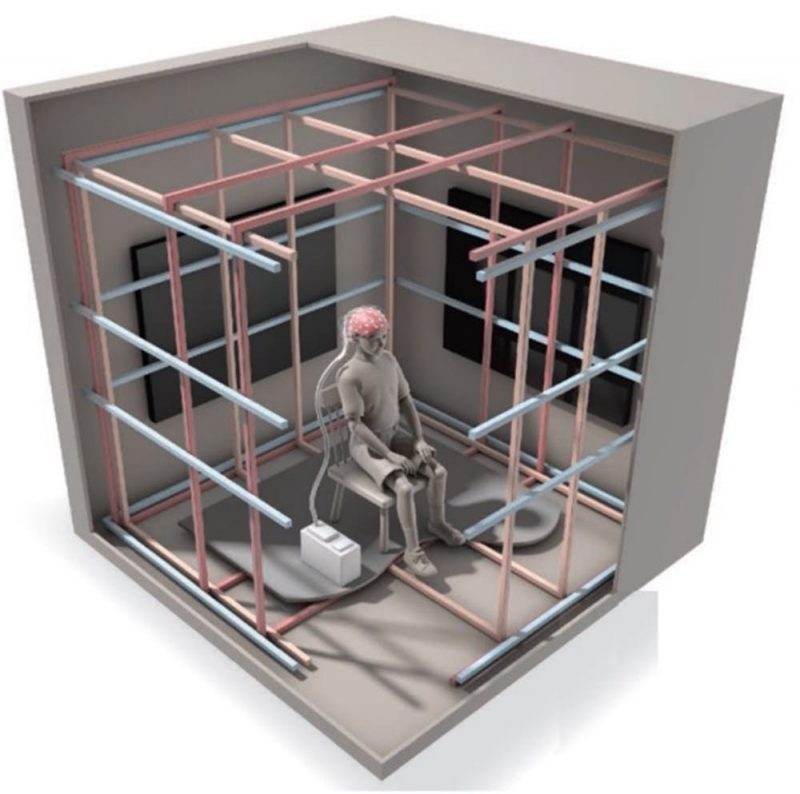 Schematic drawing of the human magnetoreception test chamber at Caltech. Image modified from ‘Center of attraction’ by C. Bickel (Hand, 2016).

In normal life, when someone rotates their head – say, nodding up and down or turning the head from left to right – the direction of the geomagnetic field (which remains constant in space) will shift relative to their skull. This is no surprise to the subject’s brain, as it directed the muscles to move the head in the appropriate fashion in the first place. 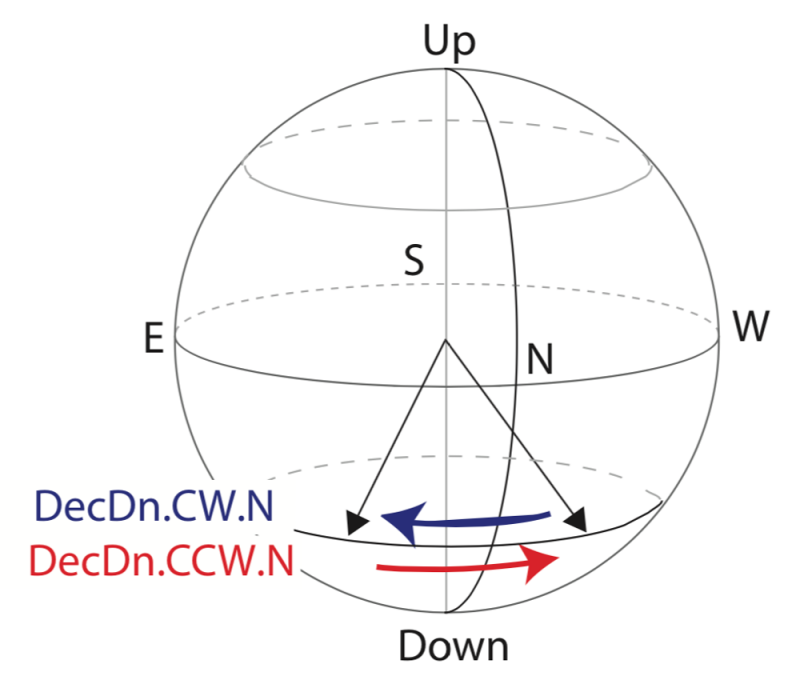 The EEG data, on the other hand, revealed that certain magnetic field rotations could trigger strong and reproducible brain responses. One EEG pattern known from existing research, called alpha-ERD (event-related desynchronization), typically shows up when a person suddenly detects and processes a sensory stimulus. The brains were “concerned” with the unexpected change in the magnetic field direction, and this triggered the alpha-wave reduction. That we saw such alpha-ERD patterns in response to simple magnetic rotations is powerful evidence for human magnetoreception.

Our participants’ brains only responded when the vertical component of the field was pointing downwards at about 60 degrees (while horizontally rotating), as it does naturally here in Pasadena, California. They did not respond to unnatural directions of the magnetic field – such as when it pointed upwards. We suggest the response is tuned to natural stimuli, reflecting a biological mechanism that has been shaped by natural selection.

Other researchers have shown that animals’ brains filter magnetic signals, only responding to those that are environmentally relevant. It makes sense to reject any magnetic signal that is too far away from the natural values because it most likely is from a magnetic anomaly – a lighting strike, or lodestone deposit in the ground, for example. One early report on birds showed that robins stop using the geomagnetic field if the strength is more than about 25 percent different from what they were used to. It’s possible this tendency might be why previous researchers had trouble identifying this magnetic sense – if they cranked up the strength of the magnetic field to “help” subjects detect it, they might have instead ensured that subjects’ brains ignored it.

Moreover, our series of experiments show that the receptor mechanism – the biological magnetometer in human beings – is not electrical induction, and can tell north from south. This latter feature rules out completely the so-called “quantum compass” or “cryptochrome” mechanism which is popular these days in the animal literature on magnetoreception. Our results are consistent only with functional magnetoreceptor cells based on the biological magnetite hypothesis. Note that a magnetite-based system can also explain all of the behavioral effects in birds that promoted the rise of the quantum compass hypothesis.

Our participants were all unaware of the magnetic field shifts and their brain responses. They felt that nothing had happened during the whole experiment – they’d just sat alone in dark silence for an hour. Underneath, though, their brains revealed a wide range of differences. Some brains showed almost no reaction, while other brains had alpha waves that shrank to half their normal size after a magnetic field shift.

A human response to Earth-strength magnetic fields might seem surprising. But given the evidence for magnetic sensation in our animal ancestors, it might be more surprising if humans had completely lost every last piece of the system. Thus far, we’ve found evidence that people have working magnetic sensors sending signals to the brain – a previously unknown sensory ability in the subconscious human mind. The full extent of our magnetic inheritance remains to be discovered.

Bottom line: New research suggests that humans – like many other animals – have a magnetic sense that lets us detect and respond to Earth’s magnetic field.