Lucy lived 3.18 million years ago in what’s now Ethiopia. An analysis of high-resolution CT scans of her fossilized skeleton shows she was equipped for climbing trees. 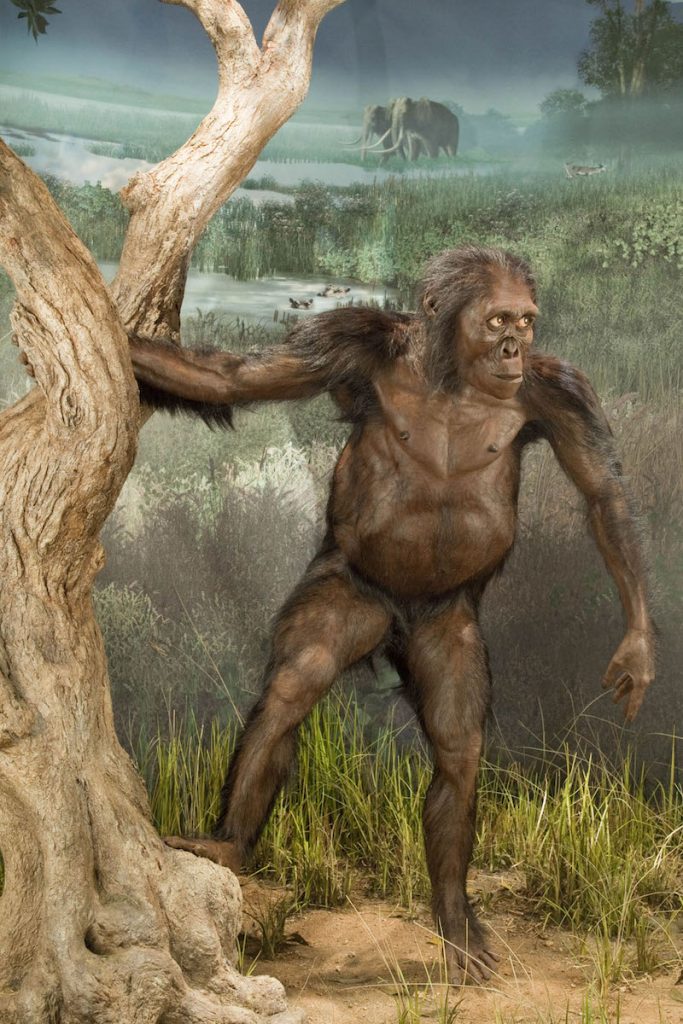 Lucy is the name given to a fossilized partial skeleton of a member of a species we call Australopithecus afarensis. This now-extinct species is thought to be a human ancestor. Members of Lucy’s species, A. afarensis, did apparently spend time walking upright on the ground. Now, new research shows that Lucy and her relatives were likely also adept tree climbers.

Scientists at the University of Texas at Austin and Johns Hopkins University published the new study on November 30, 2016 in the peer-reviewed journal PLoS ONE.

Their findings are based on analysis of high-resolution CT scans that revealed internal structures in Lucy’s fossilized bones. 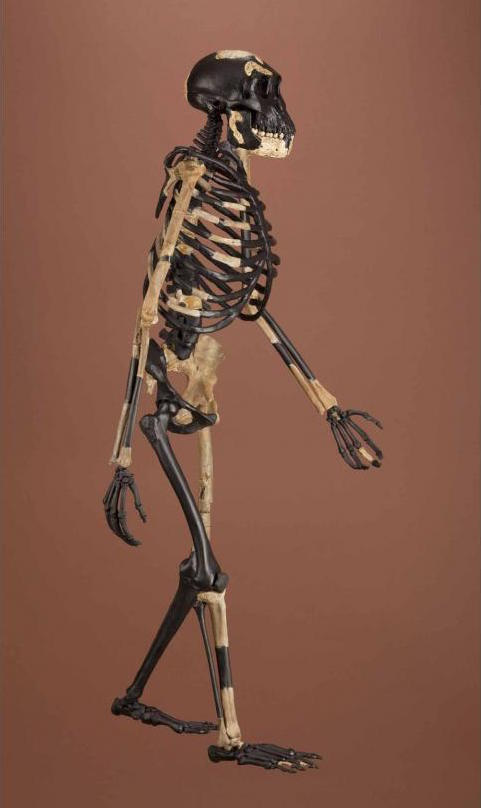 Lucy lived 3.18 million years ago in modern-day Ethiopia. This fossilized skeleton of an ancient Earth inhabitant became famous when discovered in 1974.

Lucy was a petite 3 feet 6 inches (just over 100 cm) in height. She might have weighed about 60 pounds (27 kilograms). Her remains continue to play a big role in our understanding of human evolution. Paleoanthropologist Christopher Ruff of Johns Hopkins is lead author of the new study. In a statement, he said:

We were able to undertake this study thanks to the relative completeness of Lucy’s skeleton. Our analysis required well-preserved upper and lower limb bones from the same individual, something very rare in the fossil record. 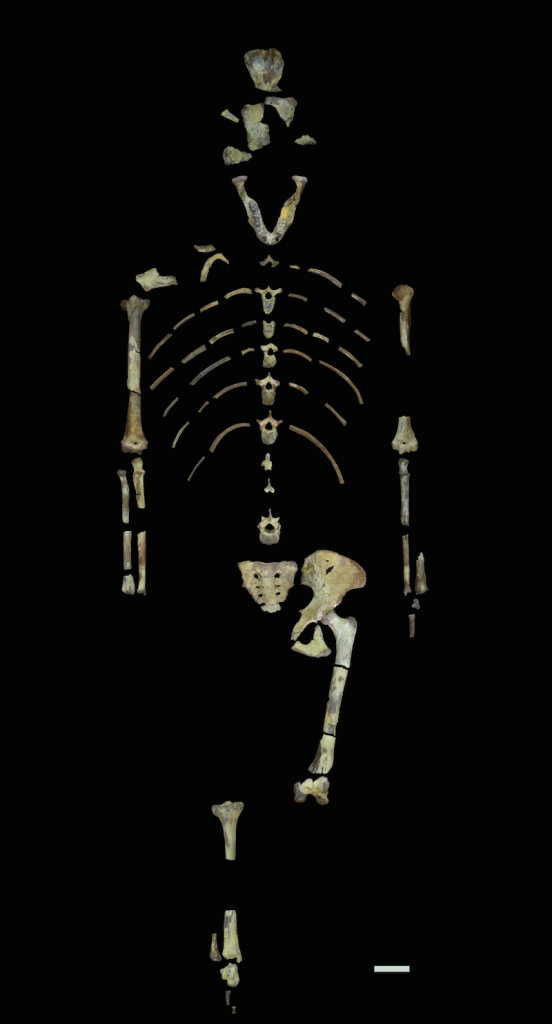 The fossil bones that make up Lucy’s skeleton. Image via John Kappelman/ University of Texas at Austin.

The researchers analyzed high-resolution CT scans of Lucy’s fossilized bones, obtained from a collection of 35,000 CT image slices. Conventional CT scans were not powerful enough to record internal bone structure details because Lucy’s bones were so heavily mineralized by the fossilization process. Those high-resolution CT scans were obtained in 2008 while Lucy, who is otherwise permanently housed at the National Museum of Ethiopia, was “on tour” in the United States.

The researchers reported that Lucy’s arms were heavily built, like those of a chimpanzee, indicating that she pulled herself up on tree branches. Her feet, however, were adapted to walking upright, unlike those of chimpanzees that use their feet to grasp branches and mostly walk on the ground using all four limbs.

The scans even showed that Lucy might have been right-handed.

Ruff explained that bones can tell us a lot about our limbs:

Our study is grounded in mechanical engineering theory about how objects can facilitate or resist bending. Our results are intuitive because they depend on the sorts of things that we experience about objects — including body parts — in everyday life. If, for example, a tube or drinking straw has a thin wall, it bends easily, whereas a thick wall prevents bending. Bones are built similarly.

It is a well-established fact that the skeleton responds to loads during life, adding bone to resist high forces and subtracting bone when forces are reduced. Tennis players are a nice example. Studies have shown that the cortical bone (outer layer of bone) in the shaft of the racquet arm is more heavily built up than that in the non-racquet arm. 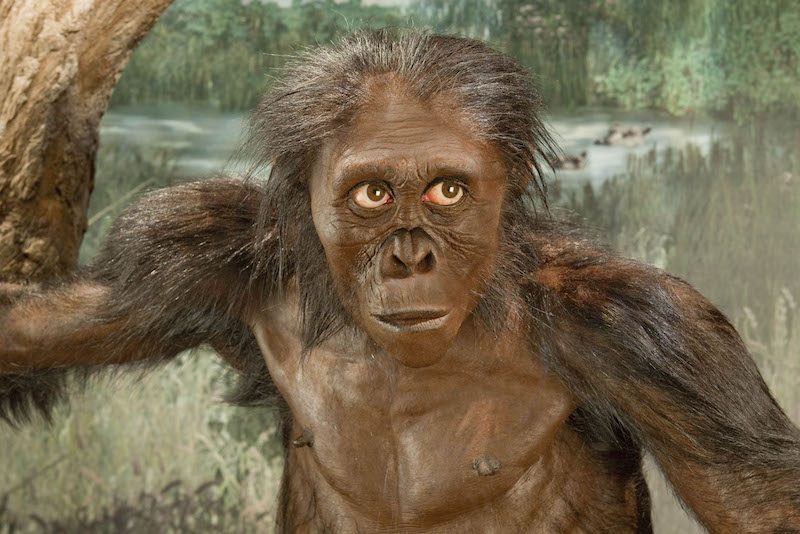 A front view of Lucy, based on a reconstruction by paleoartist John Gurche. Image via Smithsonian Institution Human Origins Initiative. See terms of use.

Comparing Lucy’s bone structure with that of humans and chimpanzees, Ruff also remarked:

Our results show that the upper limbs of chimpanzees are relatively more heavily built because they use their arms for climbing, with the reverse seen in humans, who spend more time walking and have more heavily built lower limbs. The results for Lucy are convincing and intuitive.

He added that other comparisons in their study indicated that even though Lucy was able to walk upright, she was not able to do it as well as humans and could not walk that way over long distances. Her limb bones showed she had very strong muscles, more like those in chimpanzees than humans.

In later stages of human evolution, the researchers commented, as muscles became less powerful due to the use of tools that required less physical effort, more energy could be expended to support the metabolic requirements of a larger brain.

Visit the eLucy website to learn more about Lucy.

Bottom line: High resolution CT scans that reveal structure inside the fossil bones of a 3.18-million-year-old human ancestor, known as Lucy, show evidence of heavily built arms, indicating she was a tree climber.