The long-sought “lost golden city” of Aten has been found near Luxor, Egypt, in the Valley of Kings. “The mission expects to uncover untouched tombs filled with treasures,” the scientists said. 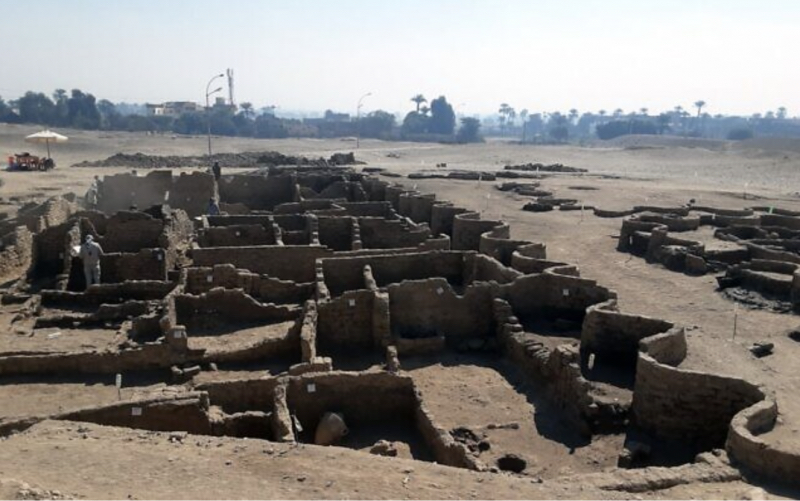 Archeologists in Egypt have announced a “lost golden city,” reportedly unearthed near the southern city of Luxor, Egypt, in the region of the Valley of the Kings. The archaeological mission – led by the famous Egyptian scientist Zahi Hawass – said in a statement on April 8, 2021, that the discovery could be the most significant find in Egypt since 1922, when British archaeologists discovered the tomb of the boy king Tutankhamen. The lost city is known as Aten. It is 3, 000 years old and dates to the reign of Amenhotep III, the ninth king of ancient Egypt’s 18th dynasty who ruled the country from 1391 to 1353 B.C.

Aten is believed to have been the largest administrative and industrial settlement of its era. Hawass said in his statement:

Many foreign missions searched for this city and never found it. We began our work searching for the mortuary temple of Tutankhamun because the temples of both Horemheb and Ay [two other ancient Egyptian pharaohs] were found in this area.

The city’s streets are flanked by houses, which some of their walls are up to meters high.

The discovery of the lost city not only will give us a rare glimpse into the life of the ancient Egyptians at the time where the Empire was at its wealthiest, but will help us shed light on one of history’s greatest mysteries: why did Akhenaten and Nefertiti decide to move to Amarna?

The announcement comes at a time when Egypt is seeking to promote tourism, following a period of decline due to the coronavirus pandemic and political unrest. The Times of Israel reported that the unrest has:

… dealt a severe blow to Egypt’s key tourism sector. The country is seeking to bring back visitors, in particular by promoting its ancient heritage. 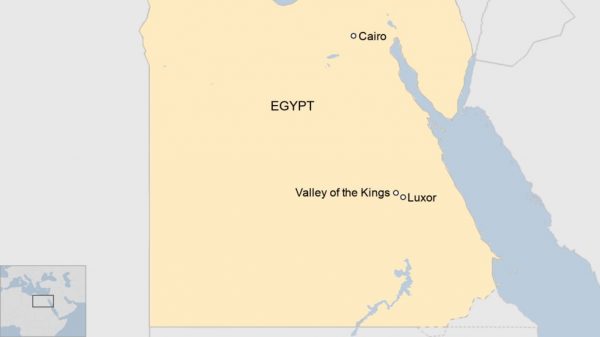 Map showing the location of the modern Egyptian city of Luxor (at the site of the ancient city of Thebes), on the banks of the Nile, and the Valley of Kings, where many ancient Egyptian ruins have been unearthed. 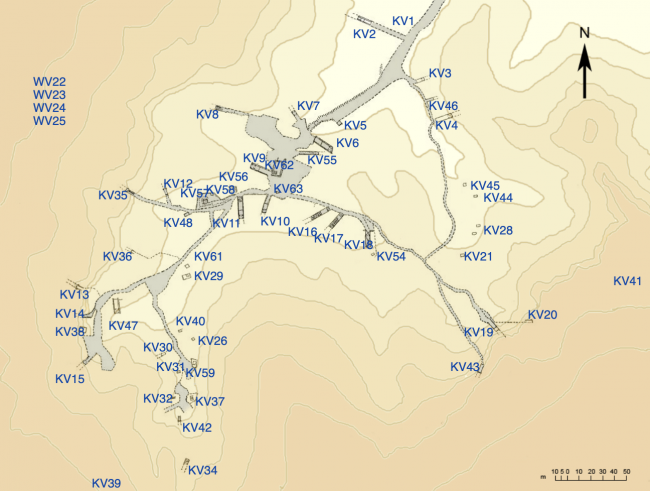 A map of the Valley of the Kings with locations of tombs marked. The new discovery of the “lost golden city” was found in this area. Image via Wikipedia.

The excavation started in September 2020, the statement explained:

… and within weeks, to the team’s great surprise, formations of mud bricks began to appear in all directions. What they unearthed was the site of a large city in a good condition of preservation, with almost complete walls, and with rooms filled with tools of daily life.

The archaeological layers have laid untouched for thousands of years, left by the ancient residents as if it were yesterday.

The first goal of the mission was to date this settlement. Hieroglyphic inscriptions found on clay caps of wine vessels. Historical references tell us the settlement consisted of three royal palaces of King Amenhotep III, as well as the Empire’s administrative and industrial center.

A large number of archaeological finds, such as rings, scarabs, colored pottery vessels, and mud bricks bearing seals of King Amenhotep III’s cartouche, confirmed the dating of the city. 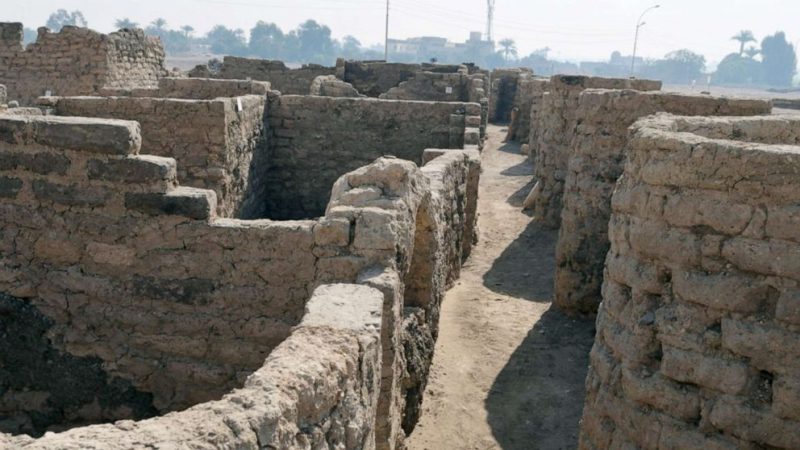 The newly discovered ‘lost city’ near Luxor in Egypt. Image via Zahi Hawass Center For Egyptology. 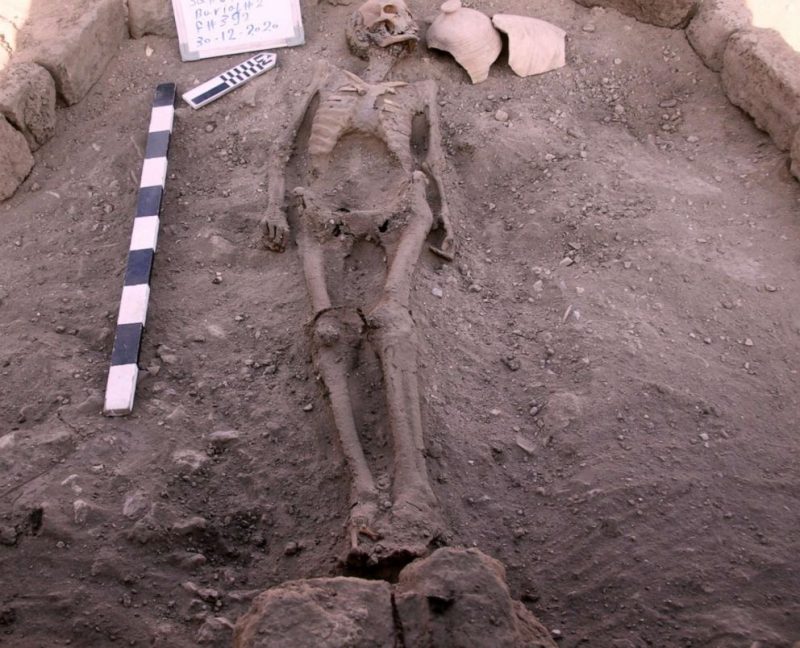 Skeletal remains found in the newly discovered ‘lost city’ near Luxor in Egypt. Image via Times of Israel/ Zahi Hawass Center For Egyptology. 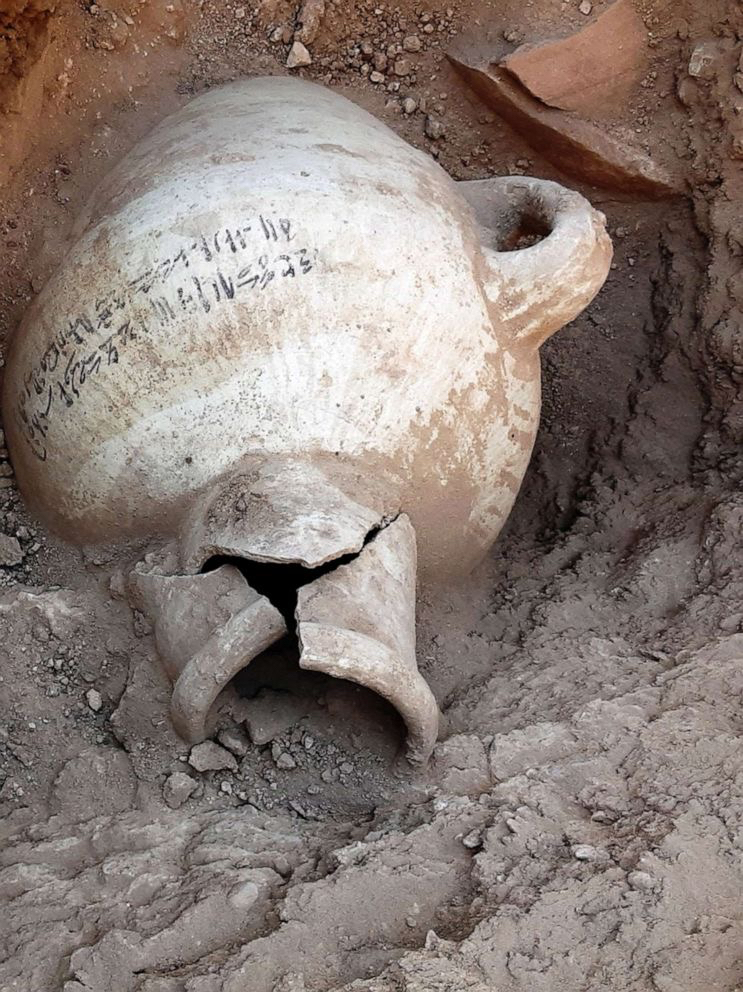 Clay pot found in the newly discovered ‘lost city’ near Luxor in Egypt. Image via Times of Israel/ Zahi Hawass Center For Egyptology.

After only seven months of excavation, several areas or neighborhoods have been uncovered.

In the southern part, the mission found a bakery, a cooking and food preparation area, complete with ovens and storage pottery. From its size, we can state the kitchen was catering a very large number of workers and employees.

The second area, which is still partly uncovered, is the administrative and residential district, with larger and well-arranged units.

This area is fenced in by a zigzag wall, with only one access point leading to internal corridors and residential areas. The single entrance makes us think it was some sort of security, with the ability to control entry and exit to enclosed areas.

Zigzag walls are one of the rare architectural elements in ancient Egyptian architecture, mainly used towards the end of the 18th Dynasty.

The third area is the workshop. On one side, the production area for the mud bricks used to build temples and annexes. The bricks have seals bearing the cartouche of King Amenhotep III (Neb Maat Ra).

On the other, a large number of casting molds for the production of amulets and delicate decorative elements. This is further evidence of the extensive activity in the city to produce decorations for both temples and tombs. All over the excavated areas, the mission has found many tools used in some sort of industrial activity like spinning and weaving.

Metal and glass-making slag has also been unearthed, but the main area of such activity has yet to be discovered.
Two unusual burials of a cow or bull were found inside one of the rooms. Investigations are underway to determine the nature and purpose of this practice.

And even more remarkable burial of a person found with arms outstretched to his side, and remains of a rope wrapped around his knees. The location and position of this skeleton are rather odd, and more investigations are in progress. 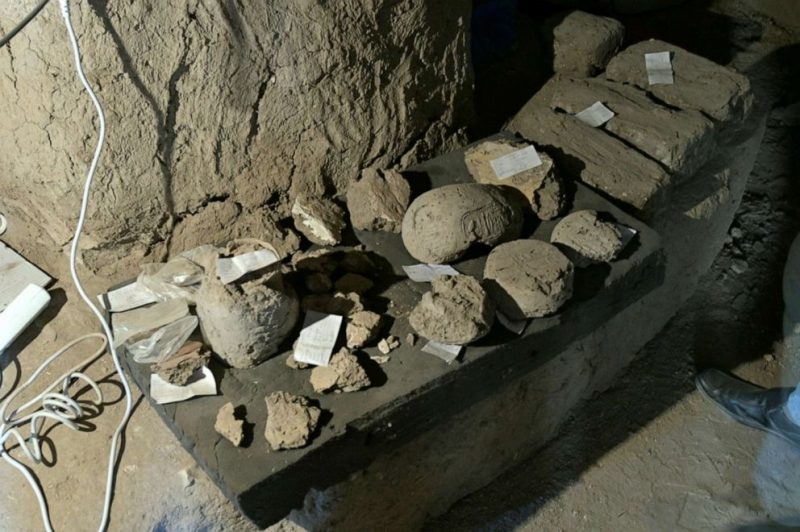 Archeological finds in the newly discovered ‘lost city’ near Luxor in Egypt. Image via Times of Israel/ Zahi Hawass Center For Egyptology.

Only further excavations of the area will reveal what truly happened 3500 years ago.

To the north of the settlement a large cemetery was uncovered, the extent of which has yet to be determined.
So far, the mission has discovered a group of rock-cut tombs of different sizes that can be reached through stairs carved into the rock, a common feature of tomb construction in the Valley of the Kings and in the Valley of the Nobles.

Work is underway and the mission expects to uncover untouched tombs filled with treasures. 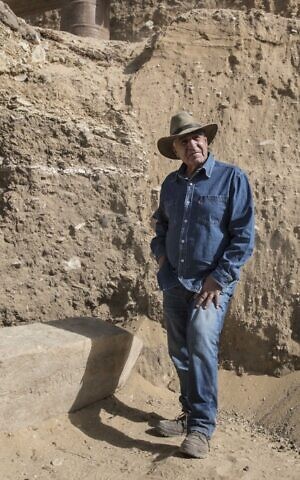 Egyptologist Zahi Hawass. Image via the Times of Israel.

The video below shows floats carrying 22 ancient Egyptian royal mummies – 18 ancient kings and 4 queens – departing from the Egyptian Museum in Cairo’s Tahrir Square on April 3, 2021, on their way to their new resting place at the new National Museum of Egyptian Civilization. The procession was dubbed the Pharaohs’ Golden Parade.

Bottom line: Scientists in Egypt announced on April 8, 2021, that they’ve unearthed the long-sought “lost golden city” of Aten. They made the find near Luxor, Egypt, and the Valley of the Kings. “The mission expects to uncover untouched tombs filled with treasures,” the scientists said. The discovery comes at a time when Egypt is seeking to promote tourism, after a decline due to political unrest and the coronavirus pandemic.

Via Times of Israel