Scientists using the Large Hadron Collider (LHC) have produced tiny droplets of a state of matter thought to have existed right at the birth of the universe. 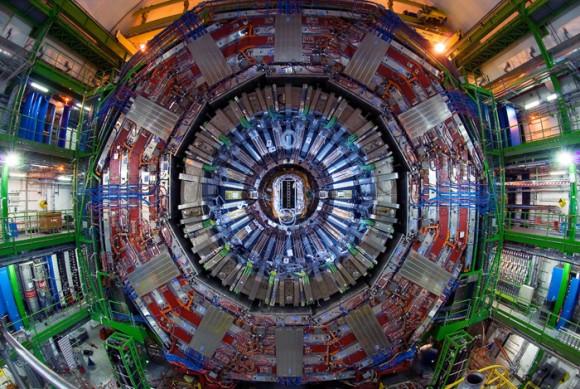 An international team at the Large Hadron Collider (LHC) have produced quark-gluon plasma — a state of matter thought to have existed right at the birth of the universe — with fewer particles than previously thought possible. The results were published in the journal APS Physics on June 29, 2015.

The Large Hadron Collider is the world’s largest and most powerful particle accelerator. The LHC, located in a tunnel between Lake Geneva and the Jura mountain range on the Franco-Swiss border, is the largest machine in the world. The supercollider was restarted this spring (April 2015) following two years of intense maintenance and upgrade. Take a virtual tour of the LHC here.

The new material was discovered by colliding protons with lead nuclei at high energy inside the supercollider’s Compact Muon Solenoid detector. Physicists have dubbed the resulting plasma the “littlest liquid.” 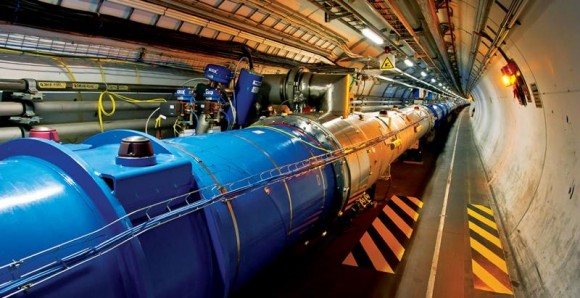 The Large Hadron Collider is the world’s largest and most powerful particle accelerator. Image credit: CERN

Quan Wang is a University of Kansas researcher working with the team at CERN, the European Organization for Nuclear Research. Wang described quark-gluon plasma as a very hot and dense state of matter of unbound quarks and gluons — that is, not contained within individual nucleons. He said:

It’s believed to correspond to the state of the universe shortly after the Big Bang.

While high-energy particle physics often focuses on detection of subatomic particles, such as the recently discovered Higgs Boson, the new quark-gluon-plasma research instead examines behavior of a volume of such particles.

Wang said such experiments might help scientists to better understand cosmic conditions in the instant following the Big Bang. He said:

While we believe the state of the universe about a microsecond after the Big Bang consisted of a quark-gluon plasma, there is still much that we don’t fully understand about the properties of quark-gluon plasma.

One of the biggest surprises of the earlier measurements at the Relativistic Heavy Ion Collider at Brookhaven National Laboratory was the fluid-like behavior of the quark-gluon plasma. Being able to form a quark-gluon plasma in proton-lead collisions helps us to better define the conditions needed for its existence.

Bottom line: Working at the Large Hadron Collider (LHC), an international team of physicists have produced quark-gluon plasma — a state of matter thought to have existed right at the birth of the universe

Read more from the University of Kansas