The Large Hadron Collider (LHC) has generated mind-blowing science in the last decade – including the Higgs boson particle. How the LHC, one of the most complex machines ever created, is helping physicists decode the universe. 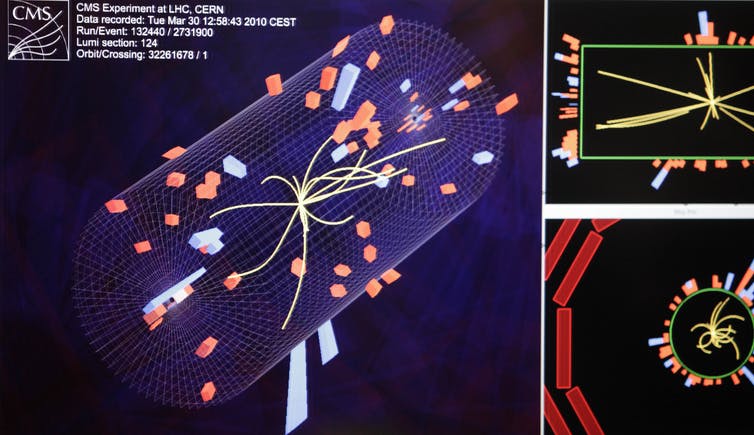 The activity during a high-energy collision at the CMS control room of the European Organization for Nuclear Research, CERN, at their headquarters outside Geneva, Switzerland. Image via AP Photo.

Ten years! Ten years since the start of operations for the Large Hadron Collider (LHC), one of the most complex machines ever created. The LHC is the world’s largest particle accelerator, buried 328 feet (100 meters) under the French and Swiss countryside with a 17-mile (27 km) circumference.

On September 10, 2008, protons, the center of a hydrogen atom, were circulated around the LHC accelerator for the first time. However, the excitement was short-lived because on September 22 an incident occurred that damaged more than 50 of the LHC’s more than 6,000 magnets – which are critical for keeping the protons traveling on their circular path. Repairs took more than a year, but in March 2010 the LHC began colliding protons. The LHC is the crown jewel of CERN, the European particle physics laboratory that was founded after World War II as a way to reunite and rebuild science in war-torn Europe. Now scientists from six continents and 100 countries conduct experiments there.

You might be wondering what the LHC does and why it is a big deal. Great questions. The LHC collides two beams of protons together at the highest energies ever achieved in a laboratory. Six experiments located around the 17-mile (27 km) ring study the results of these collisions with massive detectors built in underground caverns. That’s the what, but why? The goal is to understand the nature of the most basic building blocks of the universe and how they interact with each other. This is fundamental science at its most basic. 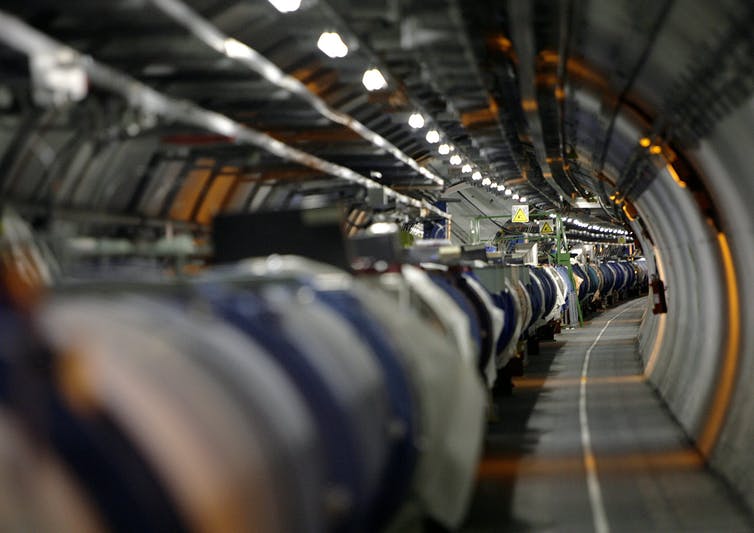 View of the LHC in its tunnel at CERN (European particle physics laboratory) near Geneva, Switzerland. The LHC is a 17-mile-long (27 km) underground ring of superconducting magnets housed in this pipe-like structure, or cryostat. The cryostat is cooled by liquid helium to keep it at an operating temperature just above absolute zero. It will accelerate two counterrotating beam of protons to an energy of 7 tera-electron volts (TeV) and then bring them to collide head-on. Several detectors are being built around the LHC to detect the various particles produced by the collision. Image via Martial Trezzini/KEYSTONE/AP Photo.

The LHC has not disappointed. One of the discoveries made with the LHC includes the long sought-after Higgs boson, predicted in 1964 by scientists working to combine theories of two of the fundamental forces of nature.

I work on one of the six LHC experiments – the Compact Muon Solenoid experiment designed to discover the Higgs boson and search for signs of previously unknown particles or forces. My institution, Florida State University, joined the Compact Muon Solenoid collaboration in 1994 when I was a young graduate student at another school working on a different experiment at a different laboratory. Planning for the LHC dates back to 1984. The LHC was hard to build and expensive – 10 billion euros – and took 24 years to come to fruition. Now we are celebrating 10 years since the LHC began operating. 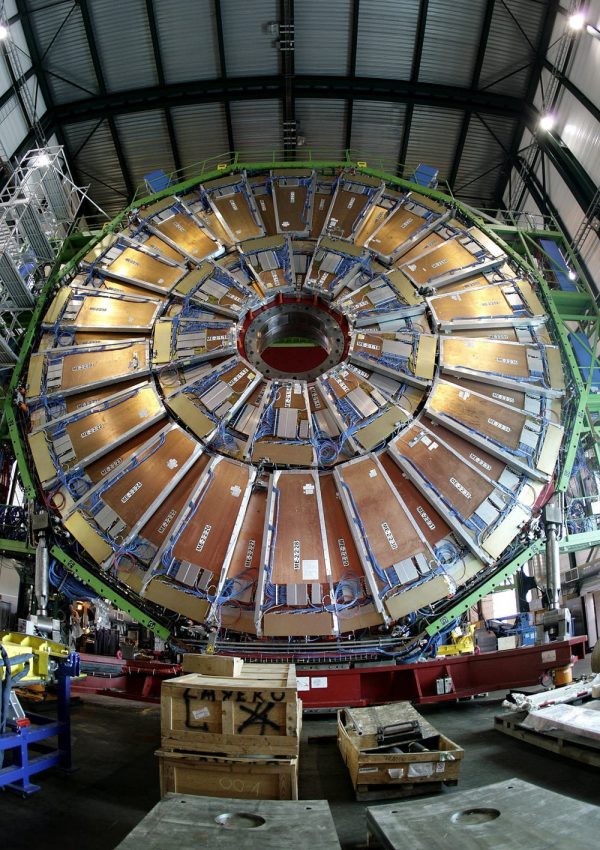 Discoveries from the LHC

The most significant discovery to come from the LHC so far is the discovery of the Higgs boson on July 4, 2012. The announcement was made at CERN and captivated a worldwide audience. In fact, my wife and I watched it via webcast on our big screen TV in our living room. Since the announcement was at 3 a.m. Florida time, we went for pancakes at IHOP to celebrate afterwards. 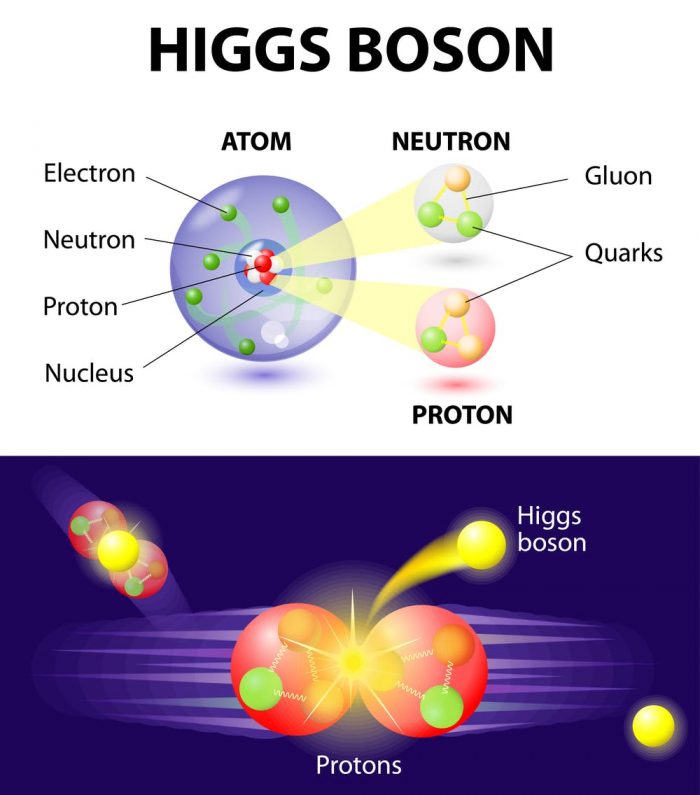 The Higgs boson, sometimes refered to as the “God particle,” was first seen during by experiments at the Large Hadron Collider. Image via Designua/Shutterstock.com.

I am often asked, why do we continue to run experiments, smashing together protons, if we’ve already discovered the Higgs boson? Aren’t we done? Well, there is still lots to be understood. There are a number of questions that the standard model does not answer. For example, studies of galaxies and other large-scale structures in the universe indicate that there is a lot more matter out there than we observe. We call this dark matter since we can’t see it. The most common explanation to date is that dark matter is made of an unknown particle. Physicists hope that the LHC may be able to produce this mystery particle and study it. That would be an amazing discovery.

Just last week, the ATLAS and Compact Muon Solenoid collaborations announced the first observation of the Higgs boson decaying, or breaking apart, into bottom quarks. The Higgs boson decays in many different ways – some rare, some common. The standard model makes predictions about how often each type of decay happens. To fully test the model, we need to observe all of the predicted decays. Our recent observation is in agreement with the standard model – another success.

There are lots of other puzzles in the universe and we may require new theories of physics to explain such phenomena – such as matter/anti-matter asymmetry to explain why the universe has more matter than anti-matter, or the hierarchy problem to understand why gravity is so much weaker than the other forces. 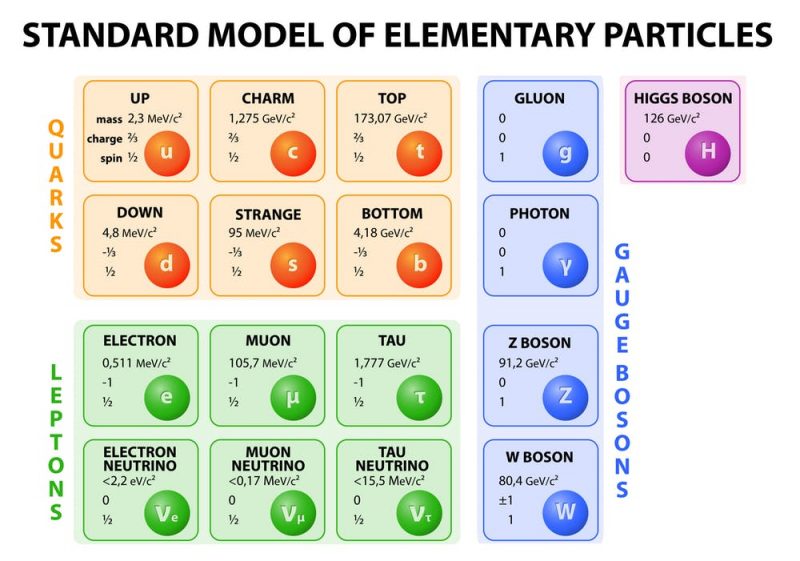 Diagram of the standard model of particle physics. There are 13 fundamental particles that make up matter that have now been discovered and four fundamental force carriers. Image via Designua/Shutterstock.com.

But for me, the quest for new, unexplained data is important because every time that physicists think we have it all figured out, nature provides a surprise that leads to a deeper understanding of our world.

The LHC continues to test the standard model of particle physics. Scientists love when theory matches data. But we usually learn more when they don’t. This means we don’t fully understand what is happening. And that, for many of us, is the future goal of the LHC: to discover evidence of something we don’t understand. There are thousands of theories that predict new physics that we have not observed. Which are right? We need a discovery to learn if any are correct.

CERN plans to continue LHC operations for a long time. We are planning upgrades to the accelerator and detectors to allow it to run through 2035. It is not clear who will retire first, me or the LHC. Ten years ago, we anxiously awaited the first beams of protons. Now we are busy studying a wealth of data and hope for a surprise that leads us down a new path. Here’s to looking forward to the next 20 years.