While trying to solve the mystery of the planets’ motions, Johannes Kepler made several false starts, then ultimately discovered 3 profound truths. 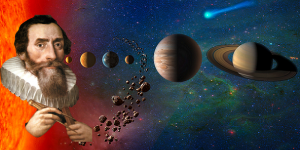 Solar system (only 6 planets shown) by NASA and Kepler by unknown artist via Wikimedia Commons.

December 27, 1571. German astronomer and mathematician Johannes Kepler was born 446 years ago today. We remember him for believing in the Copernican model – a sun-centered, not an Earth-centered solar system – when few others did and for showing the truth of the theory, via his three famous laws of planetary motion. He’s also known for working on the science of refraction – the splitting of light into its component colors – and for the basic science behind correcting eyeglasses.

Kepler was born in Weil der Stadt, Germany to a poor family. During the 16th century, religion was still responsible for the education of the populace, and so Kepler studied in religious schools. He began studying at the University of Tubingen in 1589. He wished to become a theologian, but his awe of God led him to astronomy. The purpose of Kepler’s work was always religious: he wanted to understand the universe in order to understand God.

Kepler’s mathematics teacher, German astronomer Michael Maestlin, lent Kepler an annotated copy of Copernicus’ book, De revolutionibus orbium coelestium (On the Revolutions of the Celestial Spheres). At the time, the idea of an Earth-centered universe had long been accepted among scholars. Copernicus’ view of sun-centeredness wasn’t accepted by scholars in his lifetime, but Kepler said he could feel God’s work in it. He decided to dedicate his life to prove Copernicus’ theory correct. He wrote:

I much prefer the sharpest criticism of a single intelligent man to the thoughtless approval of the masses.

In 1595, Kepler was teaching mathematics at a high school. He wasn’t a good teacher, as he wasn’t dynamic and often mumbled to himself. One day, while teaching, he had a profound (though incorrect) revelation. He thought the spacing of the six planets known at the time (Mercury, Venus, Earth, Mars, Jupiter, and Saturn) could be explained by inscribing and circumscribing spheres and the five platonic solids. He wrote:

This work proved false, but it seemed true at first, as there was an agreement to within 5 percent for all planets, with the exception of Jupiter. Kepler continued to work at the idea, trying to prove it true, for years. 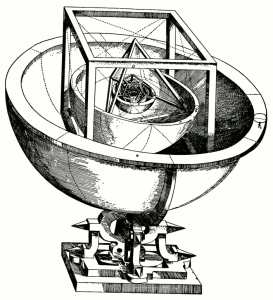 Kepler’s solar system from his Mysterium Cosmographicum, 1596 via Wikimedia Commons.

In 1600, the early astronomer William Gilbert published his famous early work De Magnete, a discussion of Earth’s magnetic nature. Kepler grasped at the notion that magnetism might be key for finding a system that would explain Mars’ retrograde motion. Again, he was wrong, but, as so often happens in science, going down wrong roads led him, ultimately, to a great discovery.

Kepler needed accurate data to be able to win what he described as the War with Mars. But he knew the astronomical data tables of his time were inaccurate and wouldn’t do the job. Meanwhile, also in 1600, Danish astronomer Tycho Brahe was in the process of acquiring much more accurate astronomical data on the positions of the planets. He invited Kepler to his castle and observatory, Uraniborg, near Prague.

At first, the two astronomers didn’t get along. Kepler wanted to solve the mystery of the sky; Tycho didn’t really want to share his data, and he spent his time entertaining guests and drinking.

However, only a year after Kepler’s arrival, Tycho died under strange circumstances and bequeathed his astronomical measurements to Kepler.

Kepler’s 1st Law states that planets move around the sun in an elliptical orbit with the sun at one focus of the ellipse. Image via OneMinuteAstronomer.

Planets move around the sun in an elliptical orbit, where the sun is one of the foci.

I was almost driven to madness in considering and calculating this matter. I could not find out why the planet would rather go on an elliptical orbit. Oh, ridiculous me! […] With reasoning derived from physical principles, agreeing with experience, there is no figure left for the orbit of the planet but a perfect ellipse.

An illustration of Kepler’s 2nd Law. Image via Gonfer via Wikimedia Commons.

In 1619, Kepler announced his third law of planetary motion:

The orbital period squared over the semi-major axis (longest distance between a planet and the sun) cubed gives a constant.

Kepler’s work was the foundation for the work of Isaac Newton in defining and explaining how gravity works. Newton used Kepler’s laws to formulate his law of universe gravitation. It remained the most powerful understanding of gravity (and hence of the cosmos as a whole) that the world had ever known, until Albert Einstein appeared on the scene in the early 20th century. 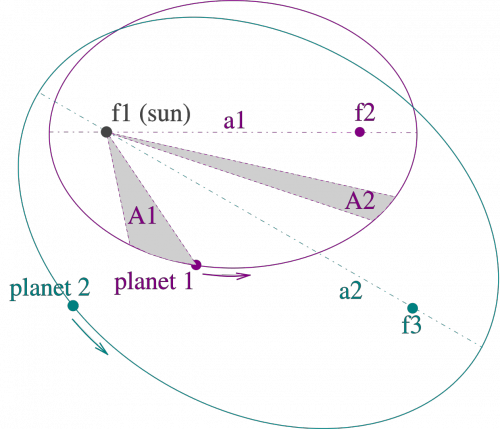 There are 2 planets’ orbits depicted in this illustration of all 3 of Kepler’s laws. Read more about this image, which is via Wikimedia Commons.

In addition to astronomy, Kepler was also interested in optics. He explained how a telescope works, how refraction occurs in our eyes, and the phenomenon of depth perception, that is, how both eyes are needed to perceive the third dimension. He also explained how eyeglass lenses compensate for the distortions that are caused by poor vision, forming the scientific basis of today’s practice of vision correction.

Throughout his life, Kepler held a religious outlook on his scientific work. He felt as though he were getting closer to understanding nature and thus closer to God.

He died on November 15, 1630 in Regensburg due to illness. Today, we remember him as one of history’s greatest scientists. NASA’s powerful and successful Kepler planet-hunter is named for him. 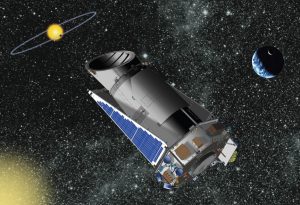 Artist’s concept of Kepler planet-hunting spacecraft looking at the constellation Cygnus, via NASA.

Bottom line: Kepler was born 445 years ago today. He is remembered for his three laws of planetary motion and his work in optics and geometry.