Jawbone is earliest evidence of modern humans in NW Europe

New test of a prehistoric jawbone from England shows it to be between 44,000 and 41,000 years old – the earliest evidence of modern humans in northwest Europe.

A piece of jawbone excavated from a prehistoric cave in England is the earliest evidence for modern humans in northwestern Europe, according to an international team of scientists. Their research shows that the bone, first believed to be about 35,000 years old, is significantly older – between 44,000 and 41,000 years old.

The new dating of the bone from Kent’s Cavern in southwestern England is expected to help scientists pin down how quickly modern humans spread across Europe during the last Ice Age. It also helps confirm the much-debated theory that early humans coexisted with Neanderthals. Results of the study appear in the November 2011 issue of the journal Nature.

Kent’s Cavern. The jawbone was discovered 10 feet 6 inches beneath the surface and was sealed by stalagmite deposits. Image Credit: TomGough

Team member Beth Shapiro of Penn State University explained that the fragment of maxilla (upper jaw) containing three teeth was unearthed in 1927 in Kent’s Cavern, a limestone cave. Records from the original excavations indicate that the jawbone was discovered 10 feet 6 inches beneath the surface and was sealed by stalagmite deposits. Shapiro said:

In 1989, scientists at Oxford University dated the bone as being about 35,000 years old. However, doubts were later raised about the reliability of the date because traces of modern glue, which was used to conserve the bone after discovery, were found on the surface. We knew we were going to have to do additional testing to re-date the bone.

Because the remaining uncontaminated area of bone was deemed too small to re-date, the research team searched through the excavation archives and collections in the Torquay Museum to obtain samples of other animal bones from recorded depths both above and below the spot where the maxilla was found. (Original excavations were undertaken by the Torquay Natural History Society in Devon, England.)

The team then obtained radiocarbon dates for bones of wolf, deer, cave bear, and woolly rhinoceros, all of which were found close to the maxilla and could be dated at between 50,000 and 26,000 years old. Using a Bayesian statistical-modelling method, the scientists then were able to calculate an age for the maxilla. 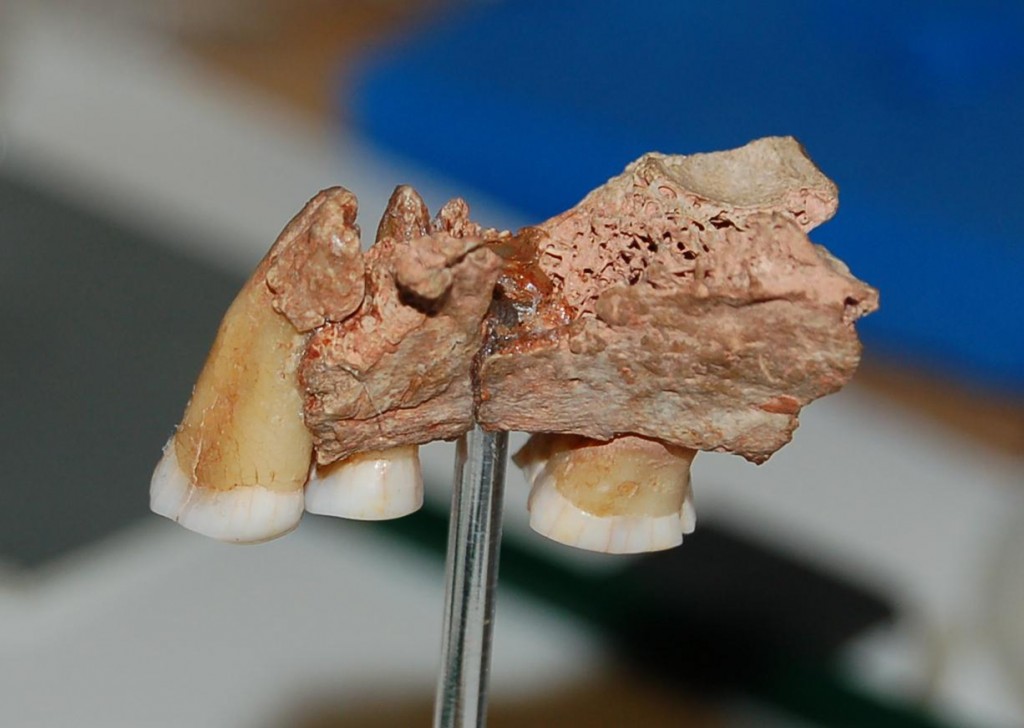 Scientists have been studying the prehistoric bone for the last decade, but it was only with the latest techniques that a new study was able to date the jawbone as the earliest modern human known from northwest Europe. Image Credit: Chris Collins (NHM) and Torquay Museum

The new dating evidence we have obtained allows us, for the first time, to pinpoint the real age of this key specimen. We believe this piece of jawbone is the earliest direct evidence we have of modern humans in northwestern Europe.

Shapiro explained that the new dating of the bone is especially important because it provides clear evidence that anatomically modern humans coexisted with Neanderthals. She said:

If the jawbone is, in fact, 44,000 to 41,000 years old, that means it was from a time when Neanderthals were still present in Europe, so we first had to confirm that the bone was from an anatomically modern human, and not a Neanderthal.

Using a virtual 3D model based on a CT scan of the jawbone, the team compared the external and internal shapes of the teeth with those of modern human and Neanderthal fossils from a number of different sites. They found early modern human characteristics in all but three of the 16 dental characteristics.

The team determined that – while the dominant characteristics are certainly modern – there are some that are ambiguous or that fall into the Neanderthal range. The team believes these ambiguous features may reflect inadequate sampling of modern human variation, shared primitive features between early modern humans and Neanderthals, or even interbreeding between the two species.

The study could help solve a mystery about the known dates of the Aurignacian period – a time of cultural development in Europe and southwest Asia that lasted from around 45,000 to 35,000 years ago. While Aurignacian tools and ornaments (thought to have been made by the earliest modern humans in Europe) have been dated as old as 44,000 years, tests to pinpoint the age of relevant human remains have resulted in dates that reach no further than between 41,000 and 39,000 years ago, indicating a significant gap.

We now have direct evidence that modern humans were in northwest Europe about 42,500 years ago. It confirms the presence of modern humans at the time of the earliest Aurignacian culture, and tells us a great deal about the dispersal speed of our species across Europe during the last Ice Age.

Bottom line: Scientists – including Beth Shapiro of Penn State University and Tom Higham of Oxford University – re-tested a prehistoric human jawbone found in Kent’s Cavern in England and determined that it is likely between 44,000 and 41,000 years old. This makes it the earliest evidence of modern humans in northwestern Europe, indicates that anatomically modern humans co-existed with Neanderthals, and confirms the presence of modern humans at the time of the earliest Aurignacian culture. Results of the study appear November 2011 in the journal Nature.

Ancient humans likely mixed it up