Jacqueline Barton: DNA like wire for signaling within a cell

Dr. Barton received a National Medal of Science after learning that cells use the double strands of the DNA helix like a wire for long-range signaling.

A professor of chemistry at the California Institute of Technology, Jacqueline Barton received a National Medal of Science in 2011 for her discovery that cells use the double strands of the DNA helix like a wire for long-range signaling among proteins within a cell. Her research holds promise for understanding how cells detect and repair DNA defects – related both to ordinary conditions like aging – and to diseases like Alzheimer’s and cancer. This podcast is part of the Thanks To Chemistry series, produced in cooperation with the Chemical Heritage Foundation. Generous sponsorship support was provided by the BASF Corporation. Additional production support was provided by The Camille and Henry Dreyfus Foundation, DuPont, and ExxonMobil. Jacqueline Barton spoke to EarthSky’s Jorge Salazar.

On October 21, 2011, you received a National Medal of Science for discovering that DNA acts like a wire in a cell. Tell us about that.

First of all, it was an extraordinary honor. I represent all the people who work with me – the graduate students and post-docs who really carry out the work.

We think about DNA usually as the library of the cell. It encodes all the information that makes us what we are.

Very soon after Watson and Crick first described the structure of DNA, chemists started asking – does this structure have the characteristic of being conductive? That was over 50 years ago.

About 20 to 30 years ago, chemists began being able to synthesize a little piece of DNA – to know exactly what’s connected to what.

At first, we thought about DNA in terms of its chemical characteristics. We found that electrons and “holes” could move through DNA. We usually think about DNA as “the library” because DNA encodes the RNA. The RNA is sort of like taking a Xerox copy of what’s in the library. Then from the RNA you go through the ribosome machine. And you make proteins. The proteins that are made are encoded by the sequence of base pairs in DNA. 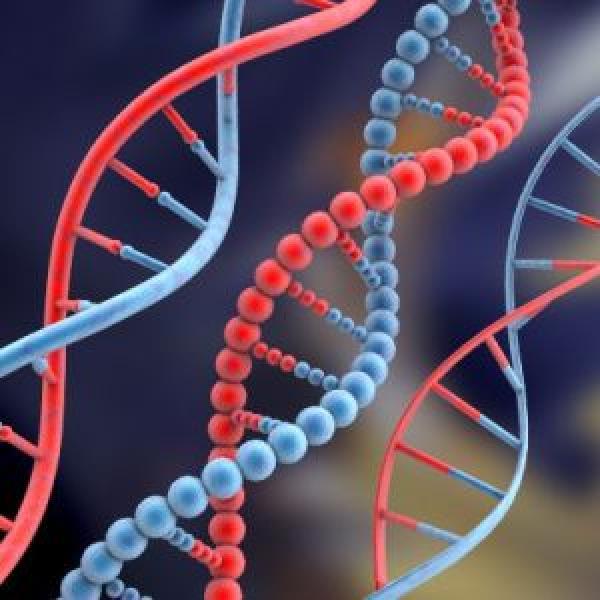 What happens, let’s say, when a cell is under stress? It has to activate a response to that stress. We’ve been finding that actually the information has to get coordinated across the DNA library because a lot of things have to happen. A lot of proteins have to get made.

We thought maybe there’s signaling across the nucleus of the cell – across the DNA-containing genome. Some of that might actually be happening by using DNA as a wire.

What do you mean by that? How can DNA be like a wire?

Your DNA is getting damaged all the time, especially if you don’t, say, eat your broccoli. When the DNA gets damaged, that damage has to get fixed or else that information in the DNA library can’t be used anymore. In each of our cells, we have this exquisite repair machinery. Little proteins are constantly sifting through your DNA to find mistakes and fix them.

We found out that DNA can be a good wire. But it’s only a good wire if all the bases are stacked on top of each other – these steps on the spiral staircase – and if the DNA isn’t damaged. If there is a little mistake in the DNA, then it’s not a good wire anymore.

Let’s go back to thinking about our DNA becoming damaged all the time – how those repair proteins have to find those mistakes in the three billion bases of DNA. We think that what happens is that nature uses DNA like a wire. It’s sort of like two telephone repairmen trying to find a mistake in the line. If they can talk to each other, if these repair proteins can talk to each other across the DNA, then the DNA is just fine. So they don’t have to repair that region. And they can go someplace else.

But if there’s a mistake in the DNA, then they can’t talk to each other so well.

From starting out over 20 years ago in synthesizing little pieces of DNA – and seeing if we can shoot an electron up or down it – we’ve come now to the point of saying nature uses DNA like a wire for long-range signaling and for finding mistakes in the DNA.

What inspired you to become a chemist?

I like being in the lab. When I was in high school, I took a lot of math courses. When I went to college I thought I’d try a chemistry course. The lab part of the class was really exciting. It got me hooked. And it gave me a way to combine my mathematical perspective with thinking about real-world problems.

At the beginning, it’s detective work – having a puzzle, a problem to solve. Doing a reaction in the lab and seeing things change colors and then isolating a product and finding out what it was. That was exciting.

As I got more and more into it, I started getting involved in research. Then there are all sorts of interesting things to think about. You’re learning things that no one ever knew before.

Listen to the 90-second and 8-minute EarthSky interview with Jacqueline Barton on the insights of today’s chemists on the repair of DNA defects – related both to ordinary conditions like aging – and to diseases like Alzheimer’s and cancer (see top of page). For this and other free science interview podcasts, visit the subscribe page at EarthSky.org. This podcast is part of the Thanks To Chemistry series, produced in cooperation with the Chemical Heritage Foundation. EarthSky is a clear voice for science.

More in the Thanks to Chemistry series:

Joseph DeSimone on being an inventor

George Whitesides: The world that we live in is chemistry