Sure it is, says this physicist, but only if you have an object with infinite mass. Here’s the story of how to build a time machine, with a design that’s deceptively simple. 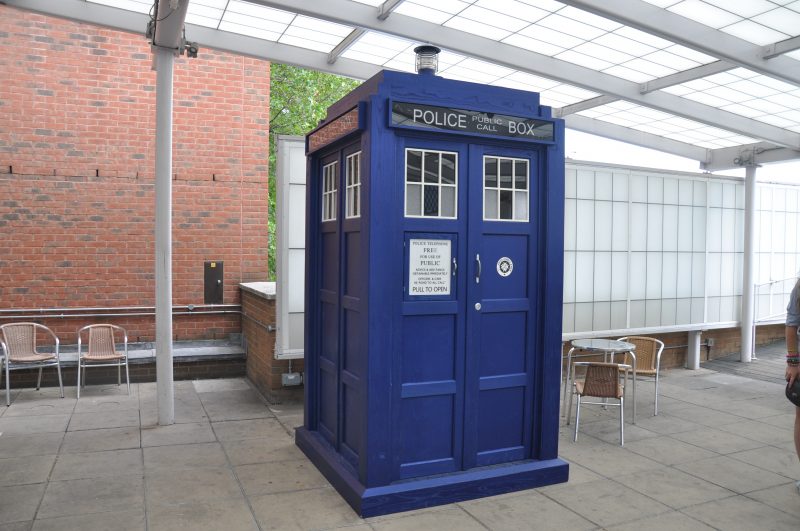 The Doctor used this time machine, called the TARDIS, to travel through space and time on the BBC television show Doctor Who. Image via Babbel1996/Wikimedia Commons.

The concept of time travel has always captured the imagination of physicists and laypersons alike. But is it really possible? Of course it is. We’re doing it right now, aren’t we? We are all traveling into the future one second at a time.

But that was not what you were thinking. Can we travel much further into the future? Absolutely. If we could travel close to the speed of light, or in the proximity of a black hole, time would slow down enabling us to travel arbitrarily far into the future. The really interesting question is whether we can travel back into the past.

I am a physics professor at the University of Massachusetts Dartmouth, and first heard about the notion of time travel when I was 7, from a 1980 episode of Carl Sagan’s classic TV series, Cosmos. I decided right then that someday, I was going to pursue a deep study of the theory that underlies such creative and remarkable ideas: Einstein’s relativity. Twenty years later, I emerged with a Ph.D. in the field and have been an active researcher in the theory ever since.

Now, one of my doctoral students has just published a paper in the journal Classical and Quantum Gravity that describes how to build a time machine using a very simple construction.

Einstein’s general theory of relativity allows for the possibility of warping time to such a high degree that it actually folds upon itself, resulting in a time loop. Imagine you’re traveling along this loop; that means that at some point, you’d end up at a moment in the past and begin experiencing the same moments since, all over again – a bit like deja vu, except you wouldn’t realize it. Such constructs are often referred to as “closed time-like curves” or CTCs in the research literature, and popularly referred to as “time machines.” Time machines are a byproduct of effective faster-than-light travel schemes and understanding them can improve our understanding of how the universe works. 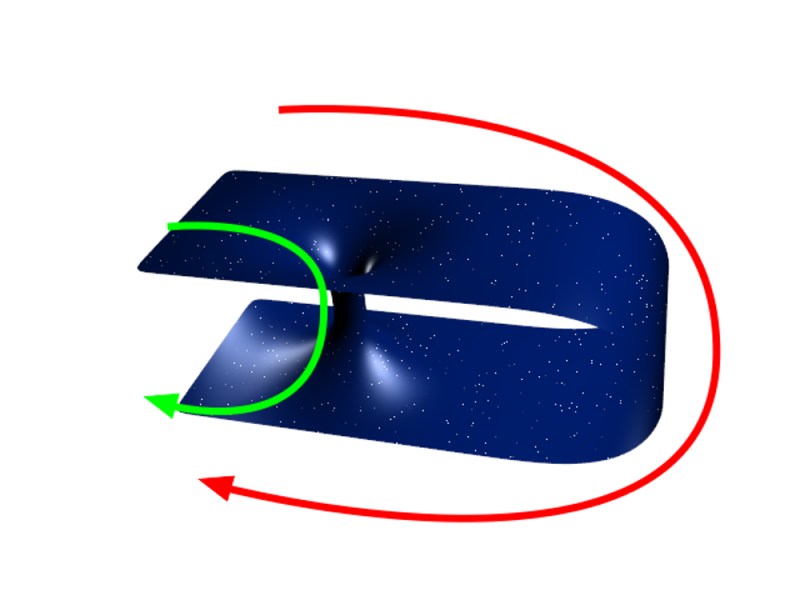 Here’s what scientists call a time loop. Green shows the short way through a wormhole. Red shows the long way through normal space. Since the travel time on the green path could be very small compared to the red, a wormhole can allow for the possibility of time travel. Image via Panzi/Wikimedia Commons.

Over the past few decades well-known physicists like Kip Thorne and Stephen Hawking produced seminal work on models related to time machines.

The general conclusion that has emerged from previous research, including Thorne’s and Hawking’s, is that nature forbids time loops. This is perhaps best explained in Hawking’s “Chronology Protection Conjecture,” which essentially says that nature doesn’t allow for changes to its past history, thus sparing us from the paradoxes that can emerge if time travel were possible.

Perhaps the most well-known amongst these paradoxes that emerge due to time travel into the past is the so-called “grandfather paradox” in which a traveler goes back into the past and murders his own grandfather. This alters the course of history in a way that a contradiction emerges: The traveler was never born and therefore cannot exist. There have been many movie and novel plots based on the paradoxes that result from time travel – perhaps some of the most popular ones being the Back to the Future movies and Groundhog Day.

Depending on the details, different physical phenomena may intervene to prevent closed time-like curves from developing in physical systems. The most common is the requirement for a particular type of “exotic” matter that must be present in order for a time loop to exist. Loosely speaking, exotic matter is matter that has negative mass. The problem is negative mass is not known to exist in nature.

Caroline Mallary, a doctoral student at the University of Massachusetts Dartmouth has published a new model for a time machine in the journal Classical & Quantum Gravity. This new model does not require any negative mass exotic material and offers a very simple design.

Mallary’s model consists of two super long cars – built of material that is not exotic, and have positive mass – parked in parallel. One car moves forward rapidly, leaving the other parked. Mallary was able to show that in such a setup, a time loop can be found in the space between the cars.

So can you build this in your backyard?

Physicists don’t expect such peculiar objects to exist in nature either. So, unfortunately a time machine is not going to be available anytime soon. However, this work shows that physicists may have to refine their ideas about why closed time-like curves are forbidden.

Bottom line: A physicist explains why and how time travel is possible.