Can you see better than your dog, cat, or goldfish?

How does your kitchen look through the eyes of a cat, fish, fly or mosquito? A new study compares our human eyesight to the vision of other creatures. 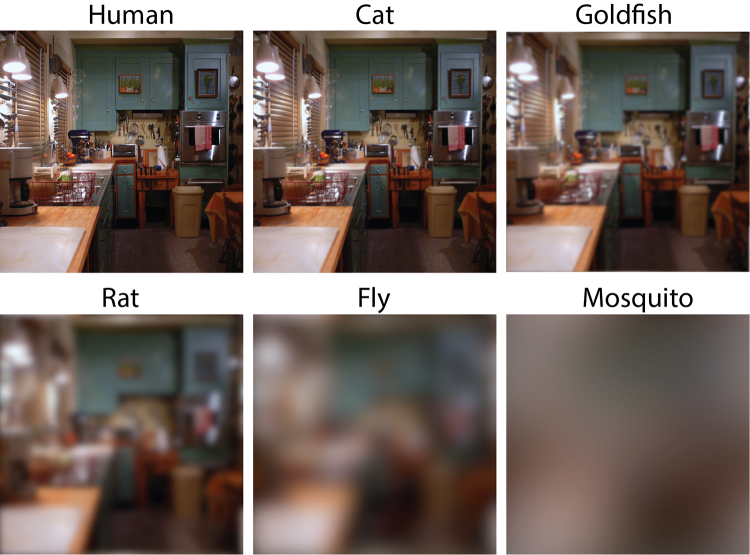 Compared with many animals, human eyes aren’t particularly adept at distinguishing colors or seeing in dim light. But by one measure at least – something called visual acuity – commonly referred to as clarity of vision – human eyes can see fine details that most animals can’t. That’s according to a new study of animal vision that compared hundreds of species by the sharpness of their sight.

In a paper published in the May 2018 issue of the journal Trends in Ecology & Evolution, the researchers compiled previously published estimates of visual acuity for roughly 600 species of insects, birds, mammals, fish and other animals.

Eleanor Caves, a postdoctoral researcher at Duke University, is the study’s first author. She said that across the animal kingdom,

… Most species see the world with much less detail than we do. 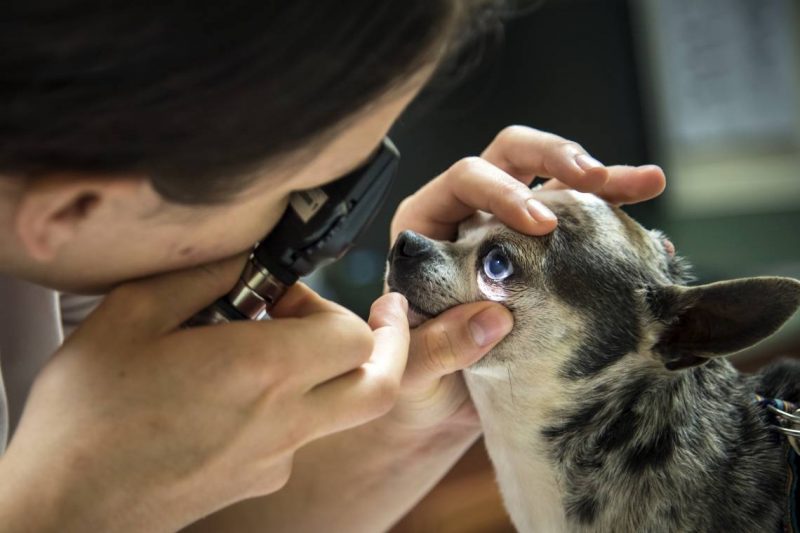 Scientists compared hundreds of species by the sharpness of their sight. They found a 10,000-fold difference between the most sharp-sighted and the most blurry-eyed species, with humans ranking near the top. Image via Eugene Oliver.

The study measured acuity in terms of cycles per degree – that’s how many pairs of black and white parallel lines a species can discern within one degree of the field of vision before they turn into a smear of gray.

Researchers can’t ask a camel to identify letters on an eye chart. Instead, they estimate visual acuity based on an animal’s eye anatomy – such as the spacing and density of light-sensing structures – or using behavioral tests.

The limit of detail that human eyes can resolve is about 60 cycles per degree, which helps us make out road signs and recognize faces from afar. Chimpanzees and other primates can pick out similarly fine patterns.

A few birds of prey do better. For instance, the wedge-tailed eagle of Australia can see 140 cycles per degree, more than twice the limit of human visual acuity. Eagles can spot something as small as a rabbit while flying thousands of feet above the ground.

But apart from some eagles, vultures and falcons, the results show that most birds see fewer than 30 cycles per degree – less than half as much detail as humans. The same goes for fish. Caves said:

The highest acuity in a fish is still only about half as sharp as us.

Humans can resolve four to seven times more detail than dogs and cats, and more than a hundred times more than a mouse or a fruit fly. A person who sees less than 10 cycles per degree is considered legally blind. Most insects, it turns out, can’t see more than one.

Overall, the researchers found a 10,000-fold difference between the most sharp-sighted and the most blurry-eyed species.

The researchers also created a series of images showing how different scenes might appear to animals with different acuities, using a software package they developed called AcuityView. The software takes a digital photo and strips away all the spatial detail that may be too fine for a given animal to distinguish.

The image on the left shows the wings of a map butterfly as they might look to a jay looking for a snack, and on the right, to another member of its kind, such as a rival or potential mate. Image via Eleanor Caves.

The converted images reveal animal patterns that, while easy for some species to see, may be imperceptible to others, or only recognizable from a short distance.

Take the patterns on a butterfly’s wing. Scientists have debated the function of their spots, stripes and splotches. One common assumption is that they warn birds and other predators to stay away. It has also been proposed that they help butterflies check out or seduce potential mates.

The researchers determined that the wing patterns of, say, the map butterfly may be apparent to many birds, but to others of their kind their wing patterns are likely a blur, even from just a few inches away. Caves said:

I don’t actually think butterflies can see them. 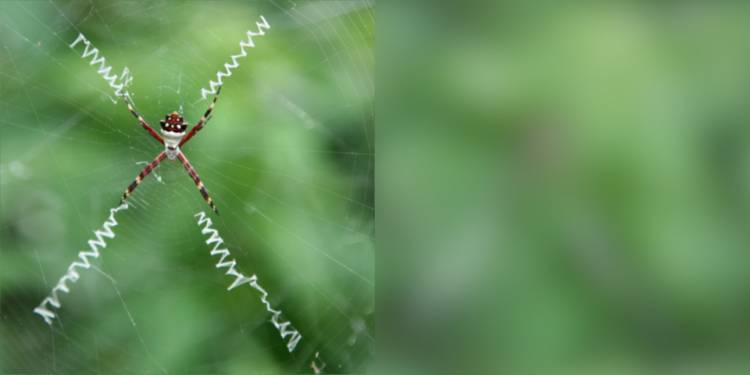 A spider web as seen in bird vision (left), and fly vision (right). The zigzags on the spider’s web send a secret message to birds that their insect prey can’t see, even from less than a foot away. Image via Eleanor Caves.

Some animals may use such differences in acuity to send secret messages that sharper-sighted species can read but others can’t, Caves said. For instance, orb-weaver spiders decorate their webs with white silk zigzags, spirals and other designs whose function has been debated. One theory is that they keep larger animals from accidentally colliding with their delicate webs, like the window stickers used to keep birds from flying into the glass. Another idea is that they lure insect prey.

But images of spider web decorations as they might appear to different species suggest that, while birds can spot them from as far away as six feet, they are virtually invisible to houseflies and other small insects that might blunder into the spider’s sticky traps.

It seems the decorations help spiders alert birds to webs that might be in their flight path, without blowing their cover with the creatures they might be trying to catch for lunch.

The converted images the team produced don’t represent what animals actually see, the researchers caution. That’s because while the eyes take in visual information, the brain must make sense of it.

It is likely that certain things may be sharper or easier to detect thanks to edge enhancement and other forms of “post-processing” that occur once the visual information is relayed to the brain, Caves said. But the software gives researchers a sense of what visual information the brain has to work with. Caves said:

The point is that researchers who study animal interactions shouldn’t assume that different species perceive detail the same way we do.

Bottom line: A new study looks at how human eyesight compares to the vision of other animals and insects.