2007 OR10 has one of the reddest surfaces ever found in our solar system’s distant Kuiper Belt. Vote to help decide between 3 possible official names. 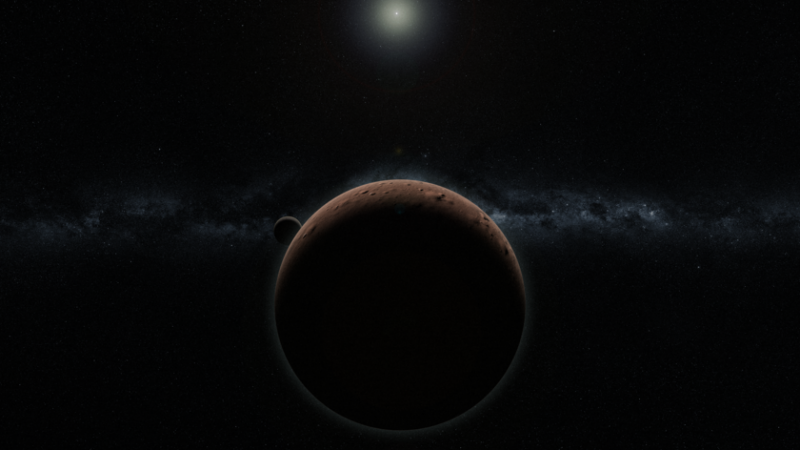 Artist’s concept of 2007 OR10 – the largest unnamed solar system object yet discovered – and its moon. Both are in the Kuiper Belt, far from the sun in our solar system. Image via Alex H. Parker/ The Planetary Society.

Astronomers Meg Schwamb, Mike Brown, and David Rabinowitz have organized a vote on an official name for our solar system’s largest unnamed body. They helped discover this Kuiper Belt object more than 10 years ago. Labeled (225088) 2007 OR10, the object has one of the reddest surfaces ever found in the Kuiper Belt. Although various names have been proposed, 2007 OR10 is still without an official name. The astronomers’ ongoing campaign – announced in an article in The Planetary Society on April 9, 2019 – invites you to vote on three possible names. The winner will be submitted to the International Astronomical Union for official recognition. Vote here. The deadline to cast a vote is 11:59 pm PDT on May 10 (6:59 UTC on May 11; translate UTC to your time).

It’s time to give 2007 OR10 a name. We’re asking for your help to pick a suitable name for 2007 OR10 to submit to the International Astronomical Union (IAU). The IAU formally bestows permanent names upon solar system minor planets, but the discoverers have a roughly 10-year period after the body has a well-determined orbit to suggest a name for the IAU to consider. We have three naming suggestions that fit the IAU naming regulations and are associated with mythological creatures and figures that reflect aspects of 2007 OR10’s physical properties. The option with the most votes will be the one that we will formally submit to the IAU for consideration. Head to https://www.2007OR10.name and vote for your favorite naming suggestion. Voting ends on May 10 [May 11 UTC].

The naming suggestions have been pre-selected to meet the requirements of the International Astronomical Union (IAU).

Gonggong
Gonggong is a Chinese water god with red hair and a serpent-like tail. He is known for creating chaos, causing flooding, and tilting the Earth.

Holle
A European winter goddess of fertility, rebirth, and women. Holle makes snow by shaking out her bed. She is a patroness of household crafts, especially spinning. She is linked to the Yuletide (winter solstice) season associated with mistletoe and holly – an evergreen plant bearing red berries.

Vili
Part of the Æsir, Vili is a Nordic diety. Vili, together with his brothers Odin and Vé, defeated frost giant Ymir and used Ymir’s body to create the universe. Ymir’s flesh and bones were forged into the Earth, with Ymir’s blood becoming the rivers and oceans.

As mentioned above, 2007 OR10 is reddish in color. What else do we know of it? Schwamb, Brown and Rabinowitz were all on the team that discovered it on July 17, 2007, as part of the Palomar Distant Solar System Survey that searched for distant bodies in the Kuiper Belt and beyond. With an orbit placing it in the Kuiper Belt, we know this object orbits beyond Neptune. Schwamb wrote:

Near-infrared spectroscopy has revealed that there are large quantities of pure water ice and possibly traces of methane ice on 2007 OR10’s surface … It is estimated to be 1,250 kilometers [777 miles] in diameter, which makes it smaller than Pluto and Eris, similar in size to Pluto’s moon Charon. 2007 OR10 is likely large enough for gravity to make it round, making it a probable dwarf planet.

2007 OR10 was originally nicknamed Snow White by Mike Brown, one of its discoverers. Around the time the team discovered it, they assumed its color was white, reasoning it would have to be very large or very bright to be detected by their survey. However, when 2007 OR10 turned out to be one of the reddest objects in the Kuiper Belt, the nickname was dropped.

There have also been petitions to assign a name to this object, including one for the name Gebeleizis. But, thus far, no name has stuck.

Via The Planetary Society