For the 1st time, the European Space Agency will cover progress of a hypothetical asteroid impact scenario – this week – live via social media, from the heart of the Planetary Defense Conference in Washington, DC. 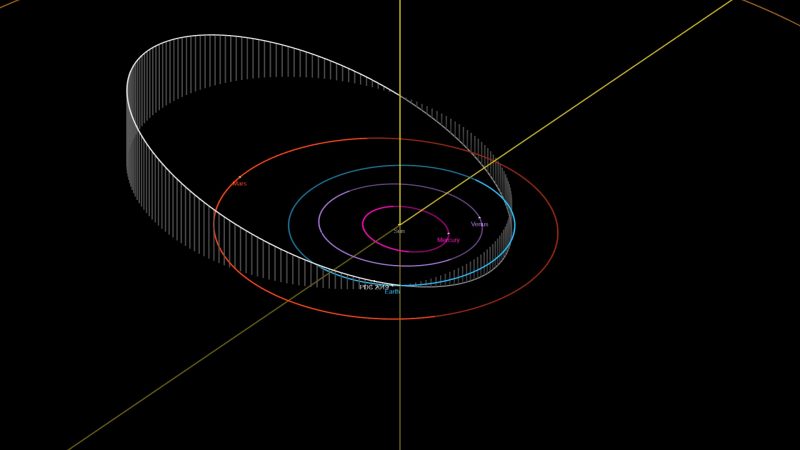 The European Space Agency (ESA) said late last week it’ll be tweeting coverage of a major international asteroid impact exercise live via social media from April 29 to May 3, 2019. You can follow the coverage via the @esaoperations Twitter channel. It’s a drill – much like the tornado drills some of us underwent in elementary school – but in this case conducted by scientists, space agencies and civil protection organizations, all acting as if an asteroid is headed for an impact with Earth. This exercise – simulating a fictional, but plausible, imminent asteroid impact – is conducted every two years by asteroid experts across the globe. It’s being conducted from the Planetary Defense Conference in Washington, D.C. ESA said:

During the week-long scenario, participants – playing roles such as ‘national government’, ‘space agency’, ‘astronomer’ and ‘civil protection office’ – don’t know how the situation will evolve from one day to the next, and must make plans based on the daily updates they are given.

You can also participate, in a more limited way, via ESA’s Facebook page. It will host two livestream videos straight from the Planetary Defense Conference. The first will be today (Sunday, April 28) at 12 UTC (14 CEST, 8 a.m. EDT; translate UTC to your time) with Rüdiger Jehn, ESA’s Head of Planetary Defense. The second will be Thursday, May 2, at around mid-afternoon European time.

For daily updates on the asteroid impact scenario, check out “Rolling coverage: Brace for hypothetical asteroid impact,” beginning on the first day of the conference, Monday, April 29.

Find out how this dramatic & risky situation will turn out LIVE from this year's #PlanetaryDefense Conference, starting Monday, 29.04. During the week, we'll post live updates the moment the experts are informed. What will they decide? #FICTIONALEVENT #ItHappenedBefore pic.twitter.com/3y7WTXlOyK

This year’s hypothetical asteroid has been given the label ‘2019 PDC’. NOTE: Although realistic, all “objects” and “events” described below are completely fictional and do NOT describe an actual asteroid impact. ESA described the fictional scenario this way:

— An asteroid was discovered on March 26 2019, and has been given the name 2019 PDC by the International Astronomical Union‘s (IAU) Minor Planet Center.

.— 2019 PDC is travelling in an eccentric orbit, extending 2.94 AU at its farthest point from the sun (in the middle of the main asteroid belt), and 0.94 AU at its closest. It completes one full orbit around the sun every 971 days (2.66 years). See its orbit in more detail here.

— The day after 2019 PDC is discovered, ESA and NASA’s impact monitoring systems identify several future dates when the asteroid could hit Earth. Both systems agree that the asteroid is most likely to strike on April 29, 2027 – more than eight years away – with a very low probability of impact of about 1 in 50,000.

— As observations continue, the likelihood of an impact in 2027 increases. Three weeks after discovery, after observations were paused during the full moon (and reduced visibility), the chance of impact has risen to 0.4 percent – that’s a chance of 1 in 250. 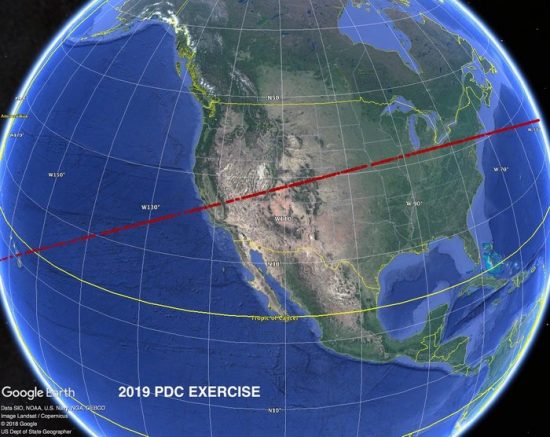 View larger. | Graphic showing the hypothetical impact risk corridor of hypothetical asteroid 2019 PDC, when its orbit is still not fully known. ESA said: “The asteroid’s uncertainty region at the time of the potential impact is much longer than the diameter of the Earth, but its width is only about 70 kilometers (45 miles). The intersection of the uncertainty region with the Earth creates a so-called ‘risk corridor’ across the surface of the Earth. The corridor wraps more than halfway around the globe, spanning from Hawaii on the western end, across the U.S. and Atlantic Ocean, and all the way to central and southern Africa on the eastern end. The red dots on the Google Earth image trace the risk corridor.” Image via ESA.

— Very little is known about the asteroid’s physical properties. From its brightness, experts determine that the asteroid’s mean size could be anywhere from 100-300 meters [approximately 300 to 1,000 feet].

— Asteroid 2019 PDC continued to approach Earth for more than a month after discovery, reaching its closest point on May 13. Unfortunately, the asteroid was too far away to be detected, and it is not expected to pass close to Earth until 2027 – the year of impact.

— As astronomers continued to track 2019 PDC, the chance of impact continued to rise. By April 2019, the first day of the Planetary Defence Conference, the probability of impact will have risen to 1 in 100.

This exercise is being produced by experts from NASA’s Planetary Defense Coordination Office working together with the U.S. Federal Emergency Management Agency (FEMA) at the 2019 Planetary Defense Conference, Washington, D.C. The conference is strongly supported by ESA, NASA and other agencies, organizations and scientific institutions.

Read more from ESA: The day the asteroid might hit

Bottom line: At the Planetary Defense Conference in Washington, D.C. – April 29 to May 3, 2019 – scientists, space agencies and civil protection organizations will be acting as if an asteroid is headed for an impact with Earth. This exercise – simulating a fictional but plausible imminent asteroid impact – is conducted every two years by these asteroid experts. This story tells how to follow the exercise on social media.