The Gemini Observatory consists of twin 8.1-meter (27-foot) diameter optical/infrared telescopes located in Hawaii and Chile. Here is Gemini South – located on the summit of Cerro Pachón in Chile – with the Large Synoptic Survey Telescope (LSST) to the right. Image via R. Pettengill (NRAO/AUI/NSF).

About an hour’s flight north of Santiago near the city of Vicuña, in the Elqui Valle, lie some of the world’s best sites for observatories: Cerro Pachón and Cerro Tololo. Vicuña calls itself the world capital of astronomy, with many tourist and research observatories nearby. The ACEAP (Astronomy in Chile Educator Ambassador Program) cadre was treated to a night of stargazing at the lovely Centro Astronómico Alfa Aldea and learned about the many educational programs that they support.

The 2019 ACEAP expedition was given full access to both locations and spent two nights with the astronomers there.

Cerro Pachón is the newer facility including the 4 meter (13 foot) SOAR (Southern Astrophysical Research) telescope, 10 m Gemini South, and under construction the 8.4 m (28 ft) LSST (Large Synoptic Survey Telescope). The Gemini telescope is the southern skies twin to the Gemini on Mauna Kea in Hawaii. Both SOAR and Gemini use adaptive optics correcting for atmospheric turbulence with sodium laser guide stars.

Nearby, Cerro Tololo hosts most of the U.S. National Science Foundation and National Optical Astronomy Observatory facilities. Cerro Tololo is ground zero for astronomical collaboration between the U.S. and Chile. 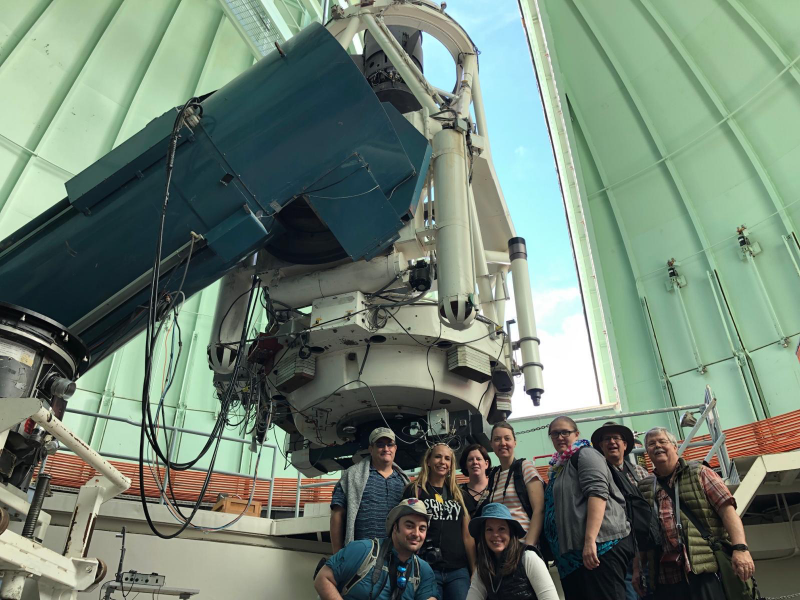 Cerro Tololo Inter-American Observatory (CTIO) is a complex of astronomical telescopes and instruments located approximately 50 miles (80 km) to the east of La Serena, Chile, at an altitude of 7,200 feet (2,200 meters). Here is the CTIO 1.5-meter telescope with ACEAP 2019. Image via K Flores/ C Johns (NRAO/AUI/NSF). 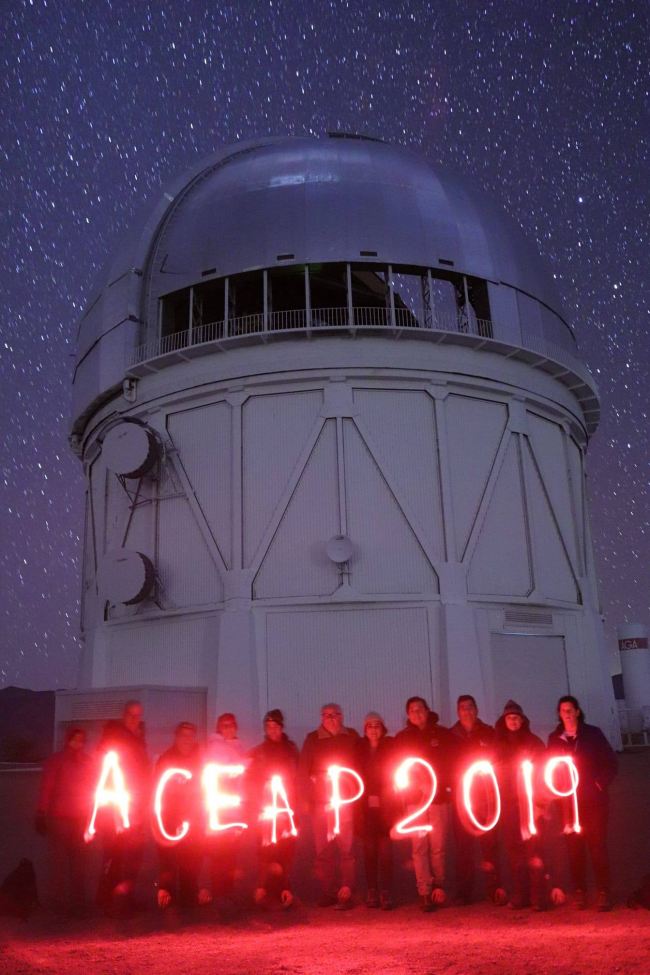 The profound darkness and silence of these sites at night is broken only by the deep hum of the telescopes dancing with the stars. We were treated to spectacular views of the Milky Way and the Magellanic Clouds.

Our days at the observatories were filled with talks and questions. Our meals at the cafeteria (casino to Chileans) were good with spectacular vistas.

The view from the Cerro Tololo casino (cafeteria), via R. Pettengill (NRAO/AUI/NSF).

We are headed next to San Pedro de Atacama and up to the ALMA radio telescope at an elevation of 16,500 feet (5000 meters). 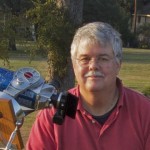 Rob Pettengill, Ph.D., is an engineer, astrophotographer, sidewalk astronomer, and volunteer astronomy educator from Austin, Texas. As a NASA JPL Solar System Ambassador, he gives astronomy and astrophotography talks to schools and clubs. His BadAstroPhotos.com website images and how-to content are free for non-commercial reuse to readers in 168 countries. In social media, his outreach is on Flickr, Facebook, Instagram, Cloudy Nights, and Quora, where he’s a “most read” astrophotography and amateur astronomy author. Rob earned his Ph.D. at Stanford for research in medical microelectronics. At Texas Instruments, he designed integrated circuits for speech synthesis and recognition. Rob has won accolades including awards from the Texas Star Party and Astronomical League, as well as many Flickr Explore selections. His images have been featured on the BBC and Time Warner, as well as in EarthSky and Sky & Telescope. He’s a team member of the 2019 Astronomy in Chile Educator Ambassador Program.