Your help needed for new research on zombie ants

A fungus takes over the ants’ brains – makes them do things they normally wouldn’t do – then kills them. You can help fund new research on these ants.

One of the most macabre examples of a natural parasite infestation is the zombie ant phenomenon. A fungus takes control of an ant’s brain, in order to reproduce. It forces the ant to attach itself to a leaf or twig, then kills it. In the ant’s corpse, the fungus continues to grow, eventually sprouting a stem containing spores that will be released to infect other ants. It’s a pretty vicious life cycle for a fungus. Scientists wanting to learn more have launched a crowdfunding website, and are directly appealing to the public for contributions. 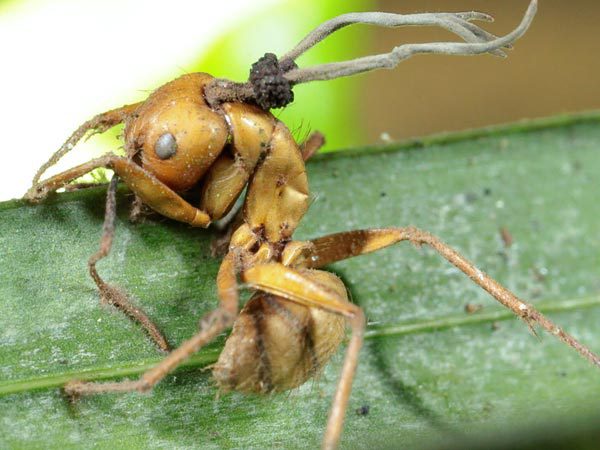 Ophiocordyceps is the genus name for several fungus species that use ants to complete its life cycle. How does this fungus so masterfully manipulate the ant’s brain?

That’s the question being pursued by Charissa de Bekker, a postdoctoral fellow at the Hughes Lab, and her team at Pennsylvania State University.

According to de Bekker, ants don’t normally attach themselves to leaves or twigs by biting down on them, so this behavior must be driven solely by the fungus growing inside the ant. If so, then there must be chemical and genetic triggers in the fungus driving these complex activities.

Understanding the mechanisms of these strange actions is the goal of de Bekker’s new research. The work is fascinating in itself, but could also lead to new medical breakthroughs in genetics.

The zombie ant phenomenon occurs worldwide, mainly in tropical and temperate rainforests. Each ant species has its own parasitic Ophiocordyceps fungus species, indicating that the two species co-evolved.

A fungus species uses its specific ant host species for its reproduction, with some variation in methodology from species to species: some ant species attach to leaves, others to twigs. Some ants are manipulated to dig into the ground. Ants that bite into leaves and twigs continue to cling to it after death because the fungus causes the muscle to waste away, locking the ant’s jaw in its biting position. 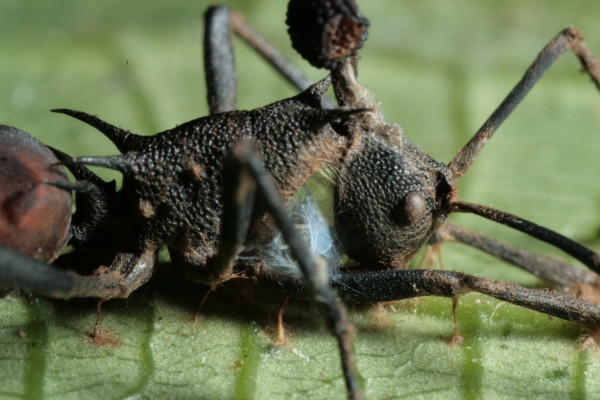 Fruiting body of fungus protruding out of a dead ant. Image via HughesLab/David Hughes.

Dr. de Bekker believes that certain genes in the fungus are activated in order to hijack the ant’s brain, then become inactive after the process is completed.

From these samples, she plans to extract RNA, ribonucleic acid. These molecules play critical roles in cells, mostly in carrying information from DNA to direct protein formation in a cell. Some RNA molecules, however, that are of particular interest to de Bekker, are part of a process called gene regulation that controls how genes are activated and inactivated.

The RNA collected by de Bekker will be sequenced by experts at the University of Pennsylvania, a technique that analyses the order of chemical building blocks in a RNA molecule, providing valuable information for researchers, including de Bekker, towards better understanding how these fungal cells work. 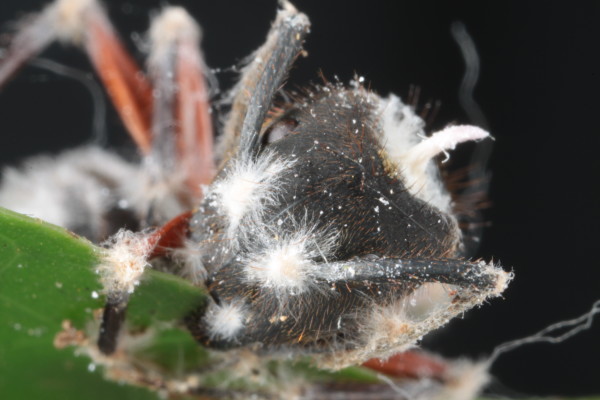 Each ant species is host to a specific fungus species. Image via HughesLab/David Hughes.

Dr. de Bekker and her team have a lot of questions, and a lot of and work ahead of them. Their crowdfunding effort, they hope, will fund part of their research and allow people to contribute directly to a science project that interests them. If you contribute, you’ll be having a direct impact on basic scientific research.

Here’s that link again, that will let you chip in on the zombie ant investigation: Crowdfunding website for zombie ant research.

Bottom line: An ant infected by a fungus that takes control of its brain is known as a zombie ant. The fungus forces an infected ant to attach itself to a leaf or twig, then kills it. Inside the ant, the fungus continues to grow, eventually sprouting a stem containing spores that ultimately will infect other ants. Charissa de Bekker, a postdoctoral fellow at Hughes lab at Pennsylvania State University, would like to study the process of fungus manipulation at the genetic level, by studying the fungus RNA before, during, and after its attack on an ant. She has launched a crowdfunding website toward this end.