Is Earth on fire?

The European Space Agency was asking this question late last week, as multiple fires burned across the globe. Read more about 2019 fires, and fire-tracking via satellite, here.

Is Earth on fire? The European Space Agency was asking this question late last week (October 25, 2019), as multiple fires burned in Lebanon, in California, and elsewhere on the globe. Is Earth on fire, and, if it is, how do we know? How do scientists track earthly fires from one year to the next? How do they distinguish between a “normal” years for wildfires – since wildfire is indeed a normal and natural occurrence on Earth – and an exceptional year, like 2019? ESA wrote:

[The fires in Lebanon and California] are just some of the many fires 2019 has seen. Fires in the Amazon sparked a global outcry this summer, but fires have also been blazing in the Arctic, France, Greece, Indonesia as well as many other areas in the world.

ESA said that in the context of announcing an updated tool for tracking fires around the globe, called the Sentinel-3 World Fire Atlas, whose prototype product and algorithm were presented at an international conference in Rome on October 3. ESA explained some insights gathered with the new tool this way:

Data from the Sentinel-3 World Fire Atlas shows that there were almost five times as many wildfires in August 2019 compared to August 2018, but a detailed analysis reveals precisely where these fires have been occurring – most of which were in Asia.

The Copernicus Sentinel-3 mission recorded 79,000 fires in August this year, compared to just over 16,000 fires detected during the same period last year. These figures were achieved by using data from the Sentinel-3 World Fire Atlas Prototype, which is also able to provide a breakdown of these fires per continent.

ESA explained that sensors on the Sentinel-3 satellite work:

… like thermometers in the sky [measuring] thermal infrared radiation to take the temperature of Earth’s land surfaces. This information is used to detect and monitor the heat emitted by the fires.

Even if the atlas cannot pick up all fires due to satellite overpass constraints and cloud coverage, it is statistically representative from one month to the other and from one year to the other.

We have never seen an increase of wildfires of this kind since the ATSR World Fire Atlas was created in 1995. 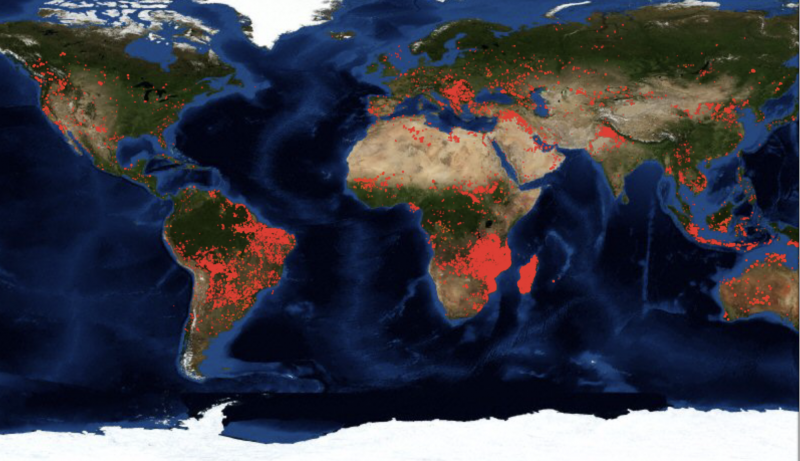 The European Space Agency isn’t alone in tracking fires around the globe, of course. NASA’s raw fire data comes largely from the Moderate Resolution Imaging Spectroradiometer (MODIS) instruments aboard its Terra and Aqua satellites. According to an article titled Wildfires Can’t Hide from Earth Observing Satellites – by Josh Blumenfeld of NASA’s Earth Observing System Data and Information System (EOSDIS) – you can sign up with NASA to receive Fire Alerts. Blumenfeld wrote:

While these fires burn, though, they can’t hide. Even in the most remote corners of the globe, their heat signatures can be detected by sensors aboard Earth observing satellites. The ability to rapidly provide information about the approximate location and movement of individual wildfires using instruments aboard Earth observing satellites is a global success story that is helping save lives and property.

Also, in August, 2019, NASA announced the Global Fire Atlas, which it called:

For each fire, the atlas contains detailed information about when each fire started and ended, in what direction it spread, how quickly it moved, and more.

Here are some links to explore if you want to know more about wildfires on Earth and how they are tracked:

Sign up here to receive Fire Alerts from NASA FIRMS

Read more: 6 Trends to Know about Fire Season in the Western U.S. from NASA Earth Observatory 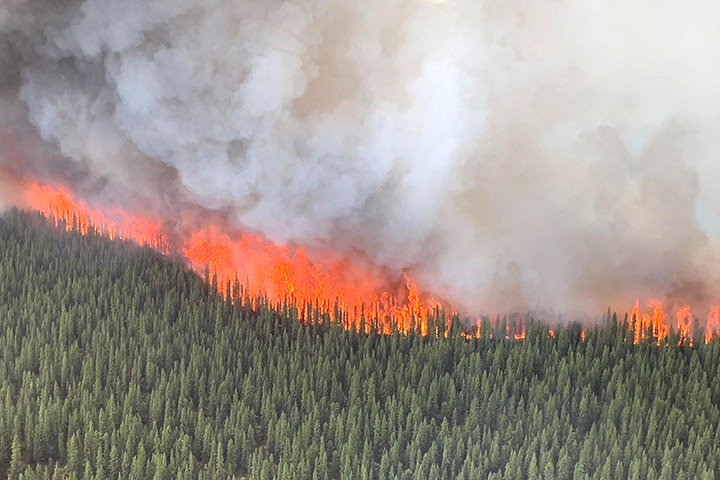 Fire raging through stand of black spruce in a boreal forest in Alaska on June 19, 2019. Image via NASA.

Bottom line: Tracking wildfires is part of the service provided by both NASA and ESA satellites. An ESA spokesperson said that the year 2019 saw an increase in the number of wildfires seen, bigger than any increase since ESA’s World Fire Atlas was created in 1995.

Via ESA: Is Earth on Fire?