Why zebras have stripes

New research suggests that stripes help zebras evade biting flies and the deadly diseases they carry. Hear from the scientists who led the study. 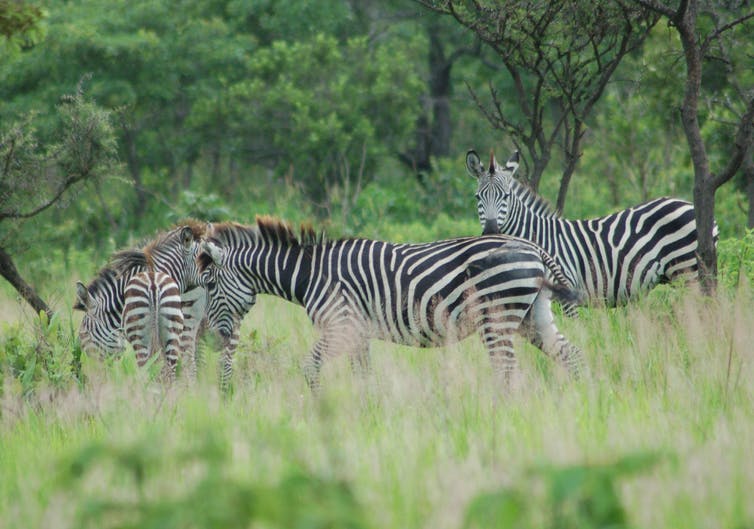 Scientific testing has zeroed in on the advantages of a zebra’s striped coat. Image via Tim Caro

Zebras are famous for their contrasting black and white stripes – but until very recently no one really knew why they sport their unusual striped pattern. It’s a question that’s been discussed as far back as 150 years ago by great Victorian biologists like Charles Darwin and Alfred Russel Wallace.

Only the last one stands up to scrutiny. And our latest research helps fill in more of the details on why. 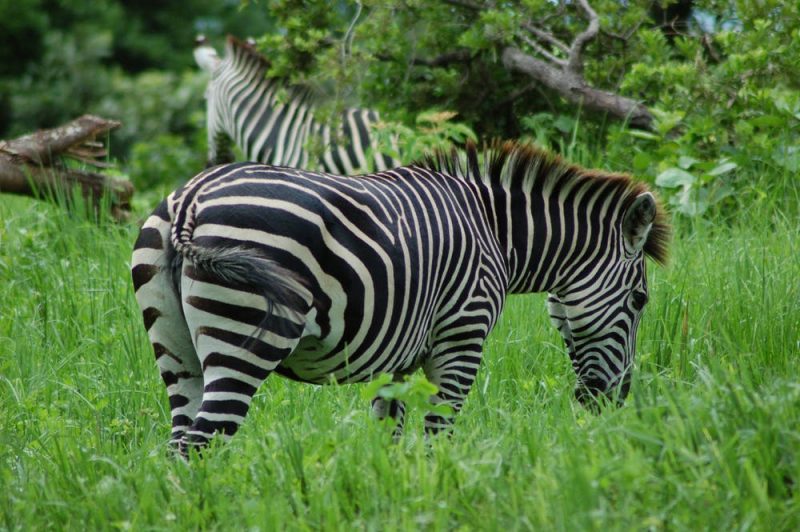 Camouflage? ID? Natural air conditioning? No, no and no. Image via Tim Caro.

What’s the advantage of zebra stripes?

Could stripes help zebras avoid becoming a predator’s meal? There are many problems with this idea. Field experiments show that zebras stand out to the human eye when they’re among trees or in grassland even when illumination is poor – they appear far from camouflaged. And when fleeing from danger, zebras do not behave in ways to maximize any confusion possibly caused by striping, making hypothetical ideas about dazzling predators untenable.

Worse still for this idea, the eyesight of lions and spotted hyenas is much weaker than ours; these predators can only resolve stripes when zebras are very close up, at a distance when they can likely hear or smell the prey anyway. So stripes are unlikely to be of much use in anti-predator defense.

Most damaging, zebras are a preferred prey item for lions – in study after study across Africa, lions kill them more than might be expected from their numerical abundance. So stripes cannot be a very effective anti-predator defense against this important carnivore. So much for the evading-predators hypothesis.

What about the idea that stripes help zebras engage with members of their own species? Every zebra has a unique pattern of striping. Could it be useful in individual recognition? This possibility seems highly unlikely given that uniformly colored domestic horses can recognize other individuals by sight and sound. Striped members of the horse family do not groom each other – a form of social bonding – more than unstriped equid species either. And very unusual unstriped individual zebras are not shunned by group members, and they breed successfully.

What about some kind of defense against the hot African sun? Given that black stripes might be expected to absorb radiation and white stripes reflect it, one idea proposed that stripes set up convection currents along the animal’s back, thereby cooling it. 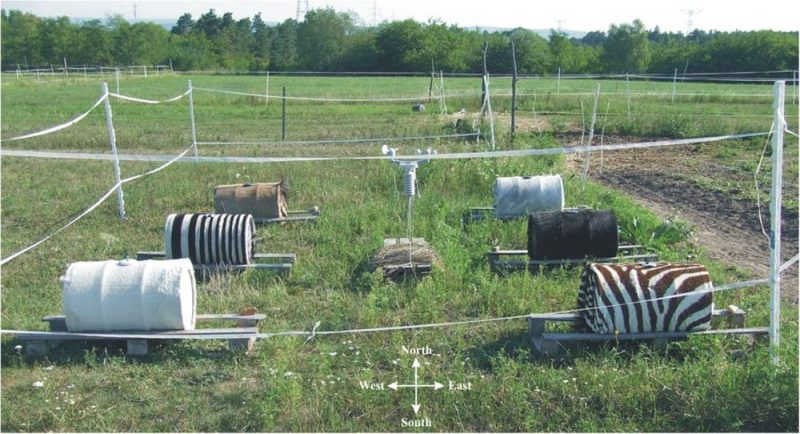 Again, this seems improbable: Careful experiments in which large water barrels were draped in striped or uniform colored pelts, or were painted striped or unstriped, showed no differences in internal water temperatures. Moreover thermographic measurements of zebra, impala, buffalo and giraffe in the wild show that zebras are no cooler than these other species with whom they live.

The last idea for striping sounds preposterous at first blush – stripes stop biting insects from obtaining a blood meal – but it has a lot of support.

Early experiments in the 1980s reported that tsetse flies and horseflies avoid landing on striped surfaces and has been confirmed more recently .

Most convincingly, however, are data from across the geographic range of the seven living species of equids. Some of these species are striped (zebras), some are not (Asiatic asses) and some are partially striped (African wild ass). Across species and their subspecies, intensity of striping closely parallels biting fly annoyance in Africa and Asia. That is, wild equids indigenous to areas where annoyance from horseflies is prolonged over the year are those most likely to have marked striping patterns.

We think that the reason equids need to be striped in Africa is that African biting flies carry diseases such as trypanosomiasis, African horse sickness and equine influenza which can be fatal to equids. And zebras are particularly susceptible to probing by biting fly mouthparts because of their short cropped coats. Having a fur pattern that helped evade flies and the deadly diseases they carried would be a strong advantage, meaning stripes would be passed on to future generations.

Uniformly colored horses received many more approaches and touchdowns by bothersome flies than did zebras. Image via Martin How.

Testing the idea that stripes and flies don’t mix

But how do stripes actually exert their influence on biting flies? We set out to examine this at a livery in Somerset, U.K., where horseflies collect in the summer.

We were lucky enough to work with Terri Hill, the livery’s owner. We could get very close to her horses and tame plains zebras, allowing us to actually watch flies landing or flying past the equids. We also videoed fly behavior around the animals, and put different colored coats on horses.

It is important to remember that flies have much poorer vision than people. We found that zebras and horses received a similar number of approaches from horseflies, probably attracted by their smell – but zebras experienced far fewer landings. Around horses, flies hover, spiral and turn before touching down again and again. In contrast, around zebras flies either flew right past them or made a single quick landing and flew off again.

Frame-by-frame analyses of our videos showed that flies slowly decelerated as they approached brown or black horses before making a controlled landing. But they failed to decelerate as they approached zebras. Instead they would fly straight past or literally bump into the animal and bounce off. 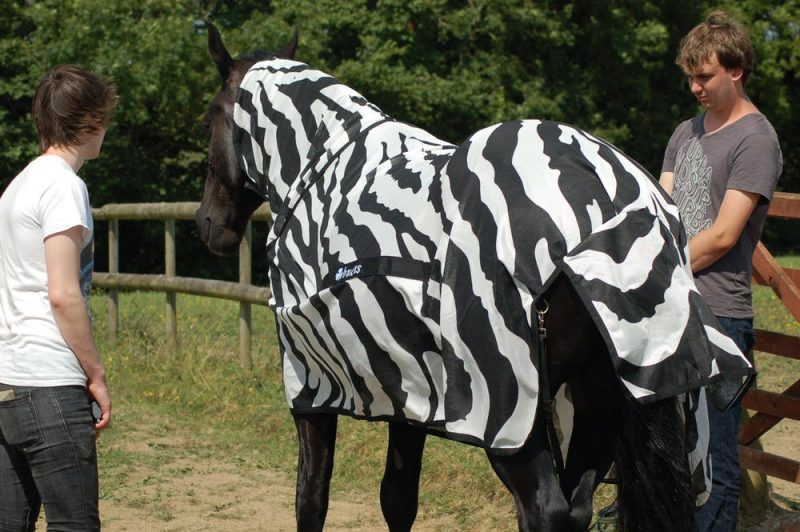 Striped coats on plain-colored horses reduced the number of fly incursions on covered parts of the body. Image via Tim Caro.

When we placed black coats or white coats or striped coats on the same horse so as to control for any differences in animal behavior or smell, again flies did not land on the stripes. But there was no difference in landing rates on the horse’s naked head, showing that stripes exert their effect close up but do not impede fly approaches at a distance.

And it showed us that striped horse coats, currently sold by two companies, really do work.

So now that we know that stripes affect horseflies really close up, not at a distance, what is actually going on inches away from the host? One idea is that the stripes set up an optical illusion that disrupts the expected pattern of movement the fly experiences as it approaches the zebra, preventing it from landing properly. Another idea is that flies don’t see the zebra as a solid entity but a series of thin black objects. Only when very close do they realize that they’re going to hit a solid body and instead veer off. We are looking into these possibilities now.

So our basic research on fly behavior is not only telling us why zebras are so beautifully striped, but it has real implications for the horse-wear industry, with the potential to make riding and horse maintenance less painful for horse and rider alike.