Scientists say they’ve solved the riddle of why a collection of balancing rocks near the San Andreas fault has never been knocked over by earthquakes. 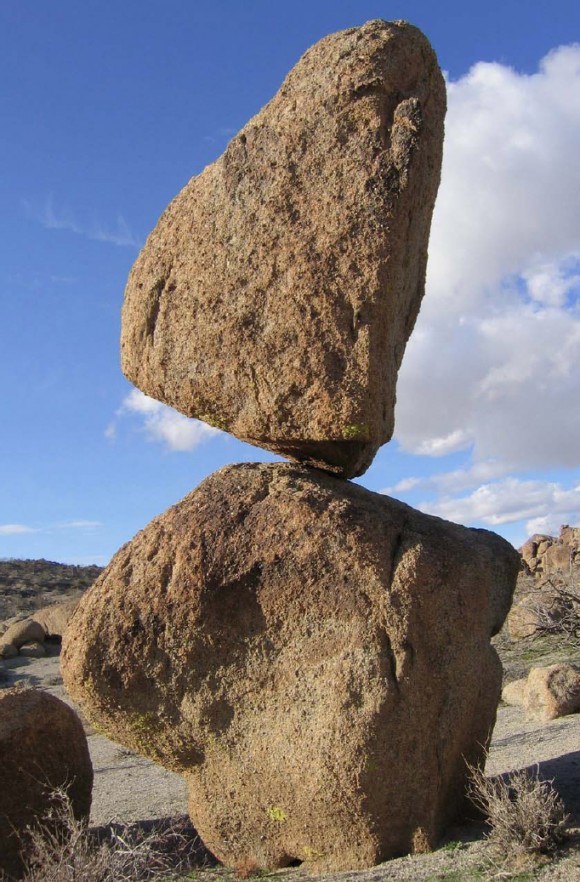 A precariously balanced rock near Searchlight, Nevada. Fragile features such as this are easily toppled by shaking from strong earthquakes. Similar formations near California’s San Andreas Fault provide critical insights into the shaking and rupture patterns of past earthquakes. Photo credit: Nick Hinze / Nevada Bureau of Mines & Geology

Stacked in gravity-defying arrangements in the western San Bernardino Mountains, near the San Andreas Fault, granite boulders that should have been toppled by earthquakes long ago resolutely remain. In exploring why these rocks still stand, researchers have uncovered connections between Southern California’s San Jacinto and San Andreas faults that could change how the region plans for future earthquakes.

According to a study published online August 5 in Seismological Research Letters, the precariously-balanced rocks have survived because interaction between the faults has weakened earthquake ground shaking near them. 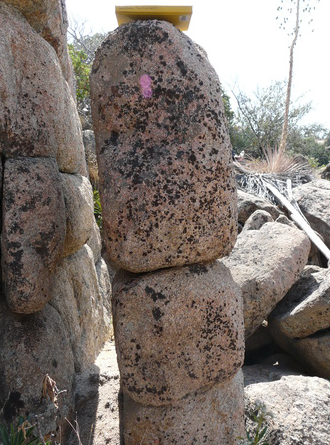 Unnamed fragile rock stack in Grass Valley area in the San Bernardino Mountains in California. The rocks lie near the San Andreas Fault within one of the highest seismic-hazard areas in the United States. Photo courtesy of Lisa Grant Ludwig

Lisa Grant Ludwig is a professor of public health at the University of California, Irvine. Grant Ludwig said:

These faults influence each other, and it looks like sometimes they have probably ruptured together in the past… and it’s an important possibility that we should think about in doing our earthquake planning.

The researchers examined 36 of these perilously arranged boulders near Silverwood Lake and Grass Valley that are only 7 to 10 kilometers from the San Andreas and San Jacinto faults. They’re at least 10,000 years old and should have experienced ground shaking from 50 to 100 large, surface-rupturing earthquakes over that time.

Scientists gauge the fragility of these rocks by studying their geometry and conducting field tests such as tilt analyses, in which they put a pulley on a precariously balanced boulder and determine the force required to tilt it to the point where, if let go, it will fall under the influence of gravity.

The researchers report this force as a measure of acceleration. Just as a person in the passenger seat of a car tilts back when the driver steps on the gas pedal, the delicately balanced rocks tilt in response to the ground accelerating beneath them due to an earthquake.

The researchers compared the fragility of the piled-up rocks with the expected ground acceleration in three earthquake scenarios created by the U.S. Geological Survey’s ShakeMap program: a magnitude-7.8 rupture of the southern San Andreas Fault, a magnitude-7.4 San Andreas quake near San Bernardino, and the magnitude-7.9 Fort Tejon temblor in 1857.

According to these scenarios – and national seismic hazard maps for the area – the 36 precariously balanced boulders should have toppled long ago.

The researchers concluded that only interaction between the San Jacinto and San Andreas faults could have produced the kind of rupture pattern that would preserve the area’s precariously stacked rocks.

Most of the earthquake planning scenarios that engineers and others use to guide the design of buildings, aqueducts and other important infrastructure only account for the consequences of ruptures along one fault, she said. Grant Ludwig said:

The San Jacinto Fault has been very seismically active; it’s produced a lot of earthquakes during [recorded history]. And the southern San Andreas Fault has not; it’s been pretty quiet since 1857.

This brings up the question of whether we might have an earthquake on the San Jacinto that triggers one on the southern San Andreas, or vice versa.

Bottom line: According to a study published online August 5, 2015 in Seismological Research Letters, stacks of precariously-balanced rocks have survived because interaction between Southern California’s San Jacinto and San Andreas faults has weakened earthquake ground shaking near them.