Why are moths attracted to flame?

Moths – and many other flying insects – are probably more disoriented by a close light source than they are attracted to it.

You might have heard the saying like a moth to a flame to describe a fatal attraction. But why are moths attracted to flame? Why are they so much attracted by it – or by the light of a bug zapper – that they fly straight into it? The fact is, entomologists – that is, scientists who study insects – aren’t sure.

One idea is that moths aren’t so much attracted to the light of a flame or other bright light as they are disoriented by it. Here’s how it works. Like many flying insects, moths are able to find their way partly by using light as a compass. When the source of light is the sun or moon, that light source is very distant, and the incoming light rays that strike the insect arrive just about parallel to each other. So moths – and many other flying insects – have evolved to expect to receive light at a fixed part of the eye (“transverse orientation“).

As long as the moth flies more or less in a straight line, this visual pattern remains unchanged. But, when the light source is a nearby candle, for example, then the angle at which the light strikes the moth’s eye quickly changes while the moth holds to a straight-line course. The moth tries to do what it has evolved to do under the light of the sun or moon – that is, maintain a constant angle to the source. As it does so, it spirals in toward the light and might end up drawn into the flame.

Another theory says that light sources which emit ultraviolet light as well as visible light attract moths. Humans can’t see ultraviolet, but it’s important to insects because many flowers have patches of ultraviolet “color” on them to guide their pollinators. Moths may mistake the floods of ultraviolet light from such sources as bug zappers for a lush field of tasty flowers and follow the spurious signal to their doom.

In yet another theory, infrared (heat) radiation from light sources may look like the infrared reflection from moth pheromones – chemicals released by insects to attract mates. In this case male moths may be fooled into thinking a sexy female awaits them, once again being fatally deceived. 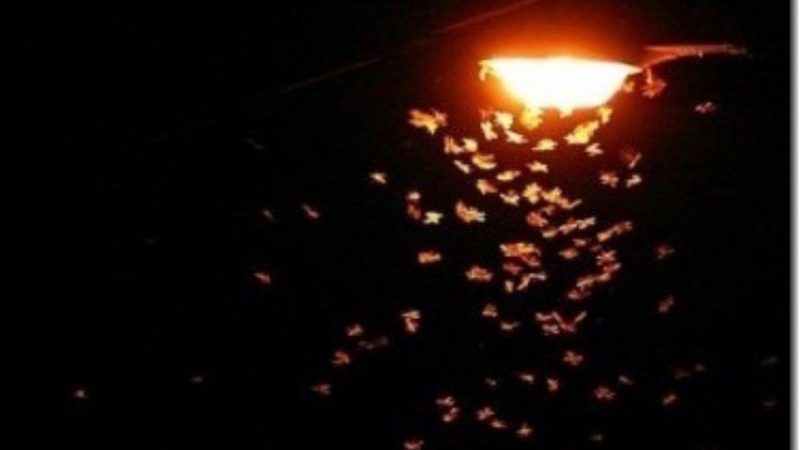 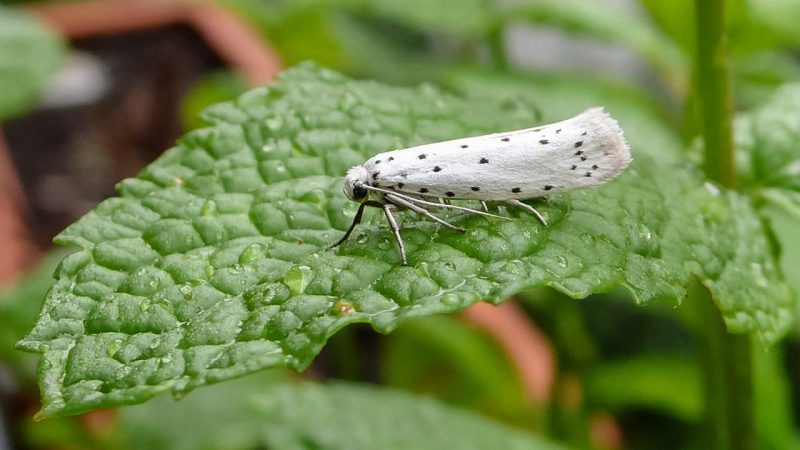 Ermine moth (Yponomeuta cagnagella). In 2016, 2 scientists in Europe tested the flight-to-light behavior of 1048 of these moths, to find out how artificial lights might be causing them to evolve.

In 2016, two biologists published a study in the peer-reviewed journal Biology Letters on the possible evolutionary consequences of our modern, artificially-lit world on moths. They tested the flight-to-light behavior of 1048 adult ermine moths, whose larvae they’d collected in 2007, just after the insects had just completed their first molt. Some were rural moths, with 320 from populations that lived under largely dark skies. The other 728 were urban moths, gathered in light-polluted areas. All the moths were then raised in a lab with 16 hours of daylight and 8 hours of darkness daily while they completed their life stages. A report in Science explained:

Two to three days after emerging as moths, they were released in a flight cage with a fluorescent tube at one side. Moths from high light pollution areas were significantly less attracted to the light than those from the darker zones … Overall, moths from the light-polluted populations had a 30 percent reduction in the flight-to-light behavior, indicating that this species is evolving, as predicted, to stay away from artificial lights. That change should increase these city moths’ reproductive success.

But their success comes at a cost: To avoid the lights, the moths are likely flying less, say the scientists, so they aren’t pollinating as many flowers or feeding as many spiders and bats.

And so, even among moths, we have another example of how humans are affecting nature!

Bottom line: There are several theories as to why moths – and other flying insects – are attracted to light.