Who will get a white Christmas this year?

Who is going to see a snow-covered ground on Christmas Day? Find out here!

Charlie Brown may think Christmas is commercial, and perhaps it is. However, there’s also a thought in everyone’s mind that Christmas is associated with snow on the ground. If you live in the South, you know for a fact that rarely happens. However, if you live at higher latitudes, then your chances are much greater at seeing snow. In this post, we will see who’s going to have a white Christmas this year. 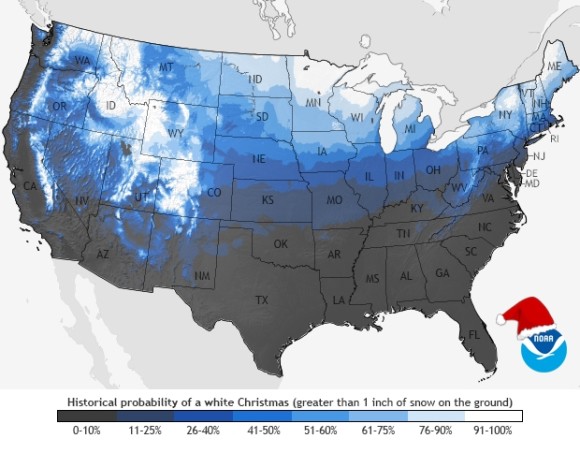 NOAA defines a white Christmas for those places that see at least one inch of snow on the ground. If it snows on the 24th and sticks on the ground for the 25th, then you have yourself a white Christmas. Climatology says that Minnesota, Maine, Upstate New York, the Allegheny Mountains of Pennsylvania and West Virginia, Idaho, and the Rockies or the Sierra Nevada Mountains are the most likely places to see snow on Christmas Day. Of course, fluctuations occur based on the activity of winter storms during the month of December. The United States has had a fair share of winter storms, but over this past weekend, many of us across the Eastern half of the United States has seen temperatures well above average. Snow that was on the ground may have melted.

Here’s a look at the snow depth across the United States on December 22, 2013: 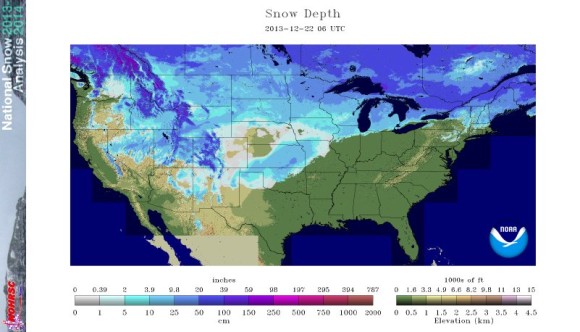 These are the areas that currently have snow on the ground as of December 22, 2013. Image Credit: NOHRSC

Below are graphics from one weather model indicating snow depth across various places around the world. It might not be truly accurate, but it can give you an idea about whether you will wake up to see snow on the ground. Rule of thumb: Climatology wins again. If you live in Canada though, you definitely win! 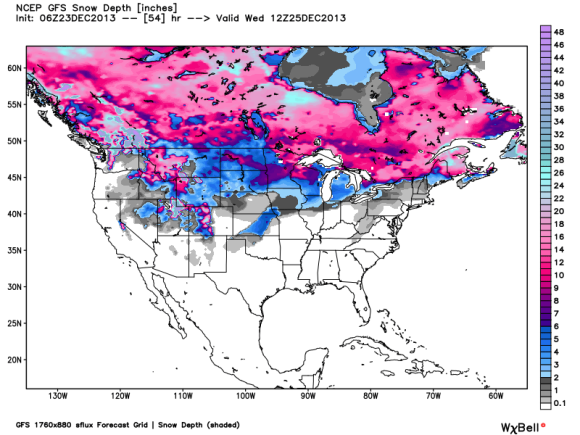 Potential snow depth on Christmas morning via the GFS model. (just a forecast and might not be completely accurate) Image Credit: Weatherbell 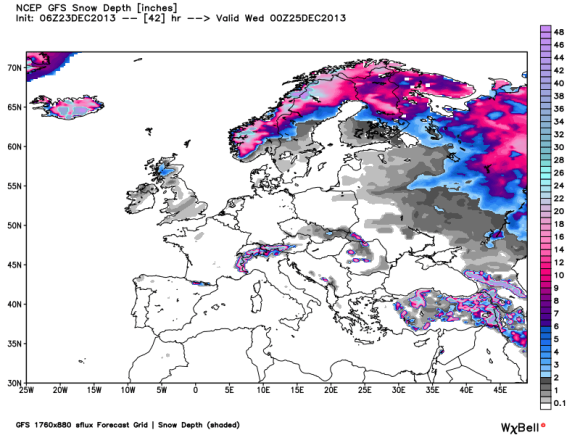 Potential snow depth on Christmas Day via the GFS model across Europe. (just a forecast and might not be completely accurate) Image Credit: Weatherbell 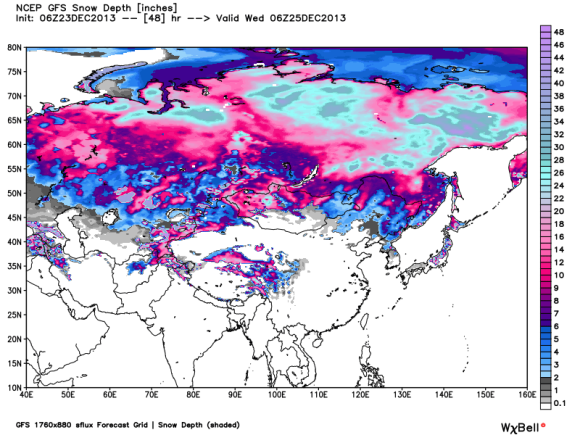 Potential snow depth on Christmas Day via the GFS model across Asia. (just a forecast and might not be completely accurate) Image Credit: Weatherbell

Bottom line: It looks like the U.S. Rockies and across the Northern parts of the United States will have snow on the ground for Christmas Day. Meanwhile, Canada and Russia are also in great shape for snow on the ground for the 25th. If you aren’t living in these places, then you might have to dream for that White Christmas after all! Merry Christmas and happy holidays to you and to all of your family!