Charles Darwin puzzled over why ants come in such wildly different sizes. The question even made him doubt his theory of evolution. New research might explain why.

A new study suggests that a seemingly useless organ – which appears briefly during soldier ants’ development – might explain why some ants are tiny workers and others are huge soldiers.

The findings might answer a question that perplexed Charles Darwin – a question he considered a “special difficulty” with his theory of evolution. He wondered, if natural selection works at the level of the individual, fighting for survival and reproduction, how can a single colony produce worker ants that are so dramatically different in size – from the minor workers with their small heads and bodies, to the large-headed soldiers with their huge mandibles?

In On the Origin of Species by Means of Natural Selection, Darwin wrote:

… But we have not as yet touched on the climax of the difficulty; namely, the fact that the neuters of several ants differ, not only from the fertile males and females, but from each other, sometimes almost to an incredible degree, and thus are divided into two or even three castes.

According to the new study, published October 10, 2018, in the peer-reviewed journal Nature, the Pheidole ant colony itself generates soldiers and regulates the balance between soldiers and minor workers thanks to a seemingly unimportant organ – a rudimentary wing disc – which appears only briefly during the final stages of larval development. And only in some of the ants – the ones that will become soldiers.

Normal worker (left) and soldier (right). The individual in the center is an intermediate produced after the soldier inhibitory pheromone halted growth of its rudimentary wing discs while it was developing. Image via Abouheif Lab.

Ehab Abouheif of McGill University is the senior author on the paper. Abouheif said in a statement:

It was a completely unexpected finding. People had noticed that during the development of soldiers that a seemingly useless rudimentary ‘organ’ would pop up and then disappear. But they assumed that it was just a secondary effect of the hormones and nutrition that were responsible for turning the larvae into soldiers.

What we discovered was that these rudimentary organs are not a secondary effect of hormones and nutrition, but are instead responsible for generating the soldiers. It is their passing presence that regulates the head and body of soldiers to grow at rapid rates until you get these big-headed soldiers with huge mandibles and big bodies.

The researchers also discovered that the ant colony maintains the balance between soldiers and minor workers – a proportion of 90-95 percent workers to 5-10 percent soldiers – by regulating the growth of the rudimentary organ in larvae. They found that the ants maintain this ratio by halting the growth of the rudimentary organ with an inhibitory pheromone when there are too many soldiers. However, the researchers said, the colony is able to ramp up the number of soldier ants very quickly if it is under threat or the number of soldiers has dropped for some reason, because the rudimentary wing discs appear only in the final stages of larval development. 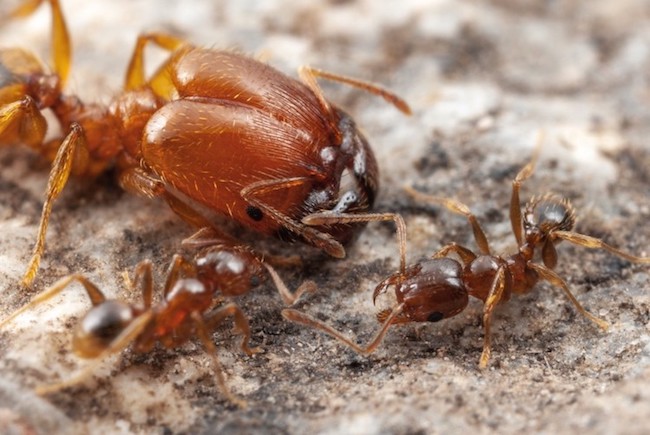 Some ant facts from the biologists at McGill University:

– The males and the queen are the only ants with wings.

– The wings grow, during the larval stage, from wing imaginal discs.

– All Pheidole worker ants are female and sterile.

– In colonies of the Pheidole genus, the worker castes are made up of both large-headed, big-bodied major ants, known as soldiers, and small-headed and bodied minor workers.

– The soldier ants are larger and have disproportionately larger heads than the workers.

– The workers carry out most of the tasks in the colony. They go out and forage and they nurse the brood.

– With large mandibles and heads filled with muscles, the large-headed soldiers act mainly in defense of the colony. They can also use their mandibles to crack seeds and help process food and will take on the roles of minor workers if needed.