What are sun pillars or light pillars?

Sun pillars, or light pillars, are shafts of light extending from the sun or other bright light sources under the right atmospheric conditions. They’re caused by ice crystals drifting in Earth’s air. 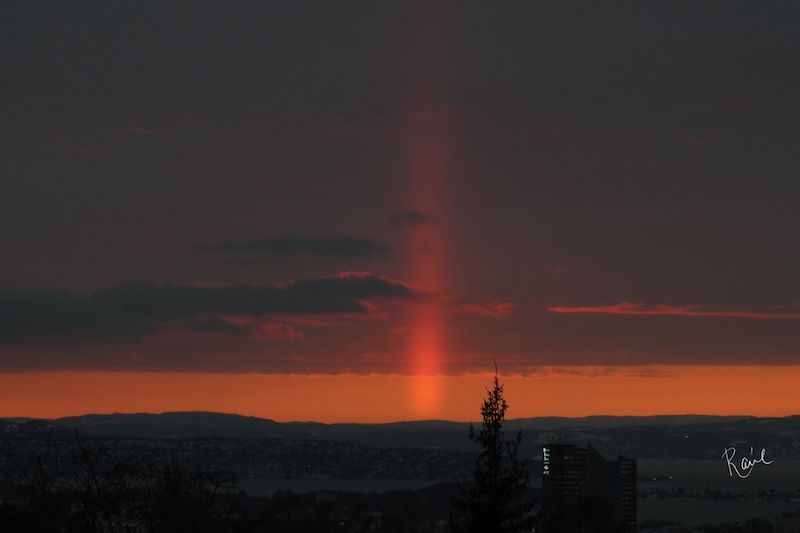 View at EarthSky Community Photos. | Raul Cortes in Oslo, Norway, captured this photo of a sun pillar during a sunset over Oslo, on January 14, 2021. Thank you, Raul!

Sun pillars are beams of light that extend vertically upward (or downward) from a bright light source, such as the sun or another bright light low on the horizon. They can be 5 to 10 degrees tall and sometimes even higher. They might lengthen or brighten as you gaze at them.

They’re beautiful and wondrous. They’re also the source of some UFO reports! 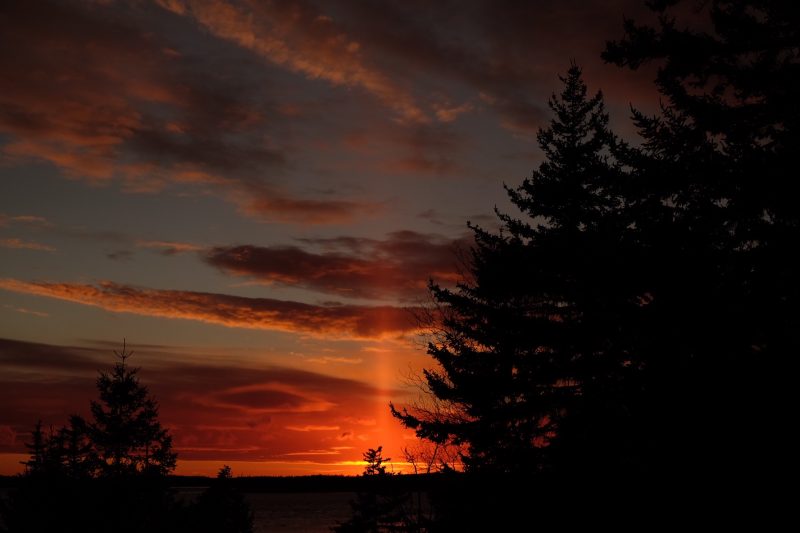 View at EarthSky Community Photos. | Penelope Parson from Brooklin, Maine, captured this photo of a solar pillar on January 8, 2021, just after sunset. She explained that she has “never seen a sun pillar!.” Thank you Penelope! 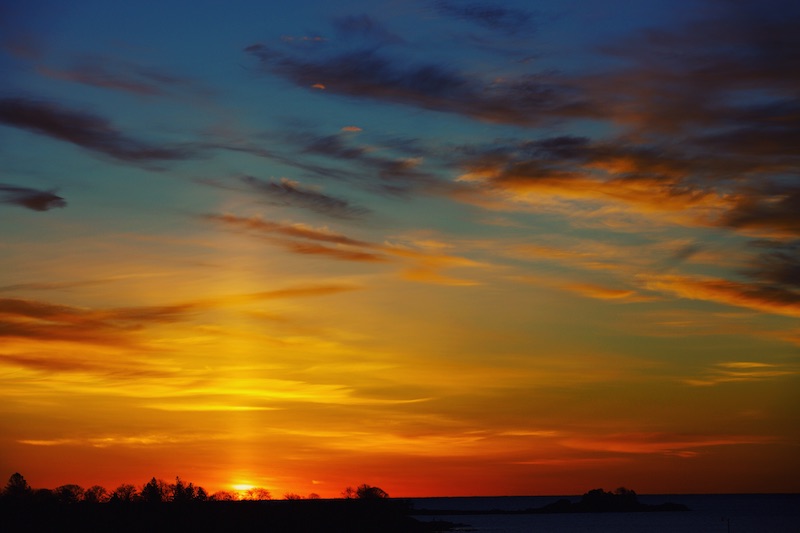 View at EarthSky Community Photos. | Susan Ogan in Marblehead, Massachusetts, captured this photo of a sun pillar on December 30, 2020. She wrote: “This image was taken at sunrise. I took it in honor of all the people who are grieving a loss of someone special. I frequently photograph sunrises and was awestruck by this rare sun pillar and am reminded that there is a pathway to the heavens and we are all connected through the beauty of the sun. Stand strong.” Beautiful! Thank you, Susan. 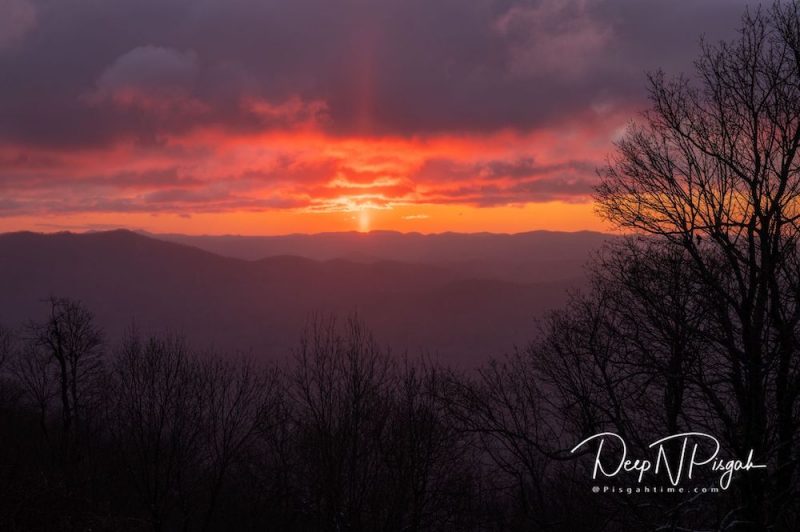 View at EarthSky Community Photos. | Nicholas Holshouser captured this photo from the Blue Ridge Parkway Milepost 412 in North Carolina, in the early morning of December 1, 2020. He wrote: “The first cold front of the season dropped temps into the teens (a bit below zero degrees C) along the Blue Ridge Parkway. As the fog rolled over the ridge behind me, sunlight (from below the horizon) began illuminating the cold air and created a beautiful sun pillar. The sun pillar extended even above the clouds. Easily the most perfect example of a sun pillar I’ve ever witnessed.” Thank you, Nicholas! 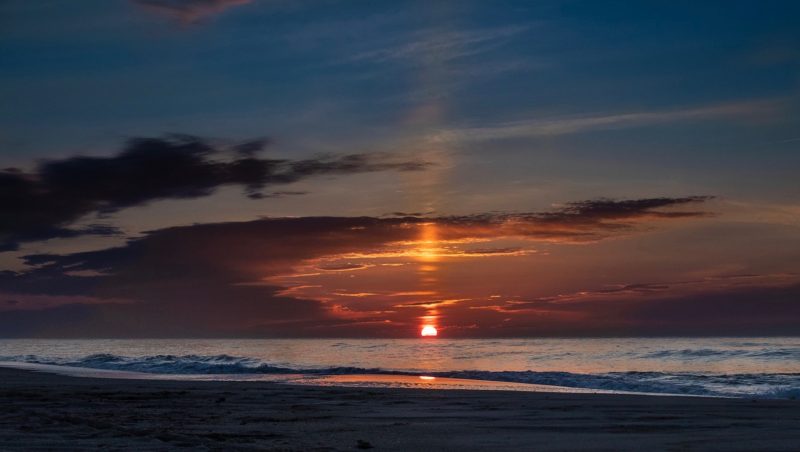 Sun pillars or light pillars form when sunlight (or another bright light source) reflects off the surfaces of millions of falling ice crystals associated with thin, high-level clouds – for example, cirrostratus clouds. The ice crystals have roughly horizontal faces. They are falling through Earth’s atmosphere, rocking slightly from side to side.

Michael Busch captured this pair of photos on December 12, 2018, and wrote: “Incredible sun pillar above and then below the sun. Fire Island, New York.” Wow! Thanks, Michael.

They’re called sun pillars when the sun helps make them. But the moon or even streetlights can create this light phenomenon, too, in which case the name light pillar is more appropriate.

These pillars of light often prompt people to report sightings of UFOs. They can sometimes look strange! There are said to be a lot of UFO reports caused by light pillars over Niagara Falls, where the mist from the rush of descending water interacts with the city’s many upward facing spotlights. Light pillars do appear frequently over Niagara Falls, especially during the winter.

As always, the great website Atmospheric Optics is a wonderful place to go and learn more about sun pillars. 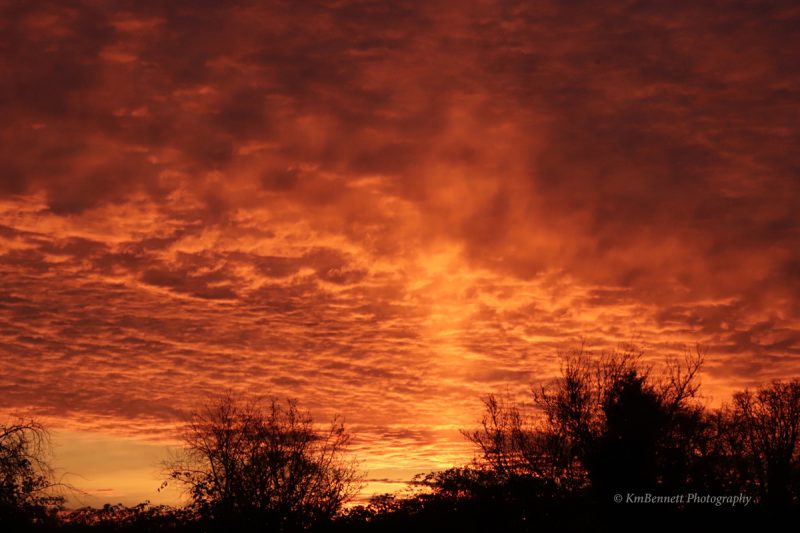 December 7, 2018, sunrise from Independence, Oregon, via Kathryn M. Bennett. Notice the sun pillar! Kathryn said she literally ran outside to get images before having to leave for work. “As I was photographing, I noticed the sun pillar.” 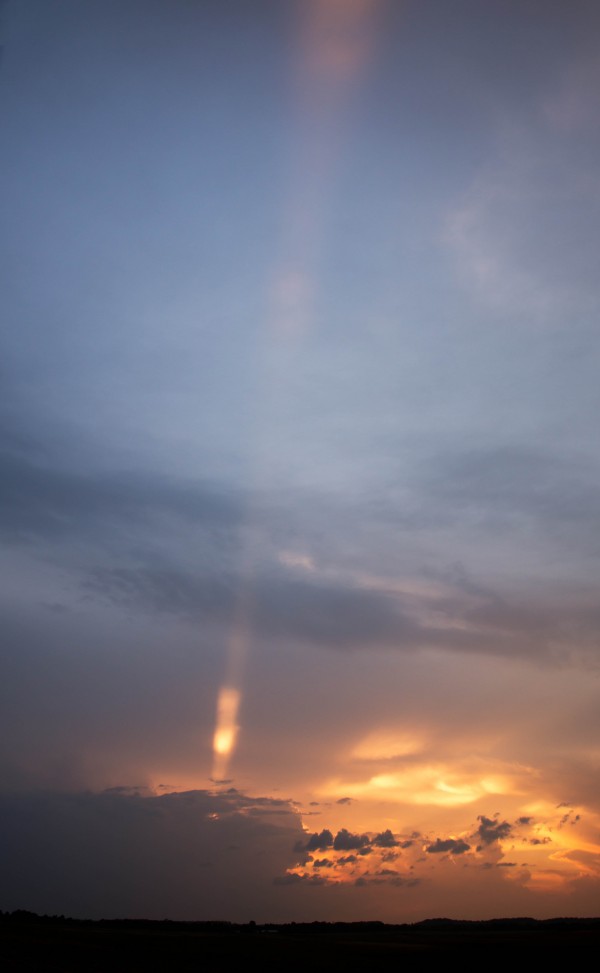 Joe C. Tabb and Dawn Tabb caught this amazing sun pillar at sunset on May 10, 2016. A storm had recently passed. 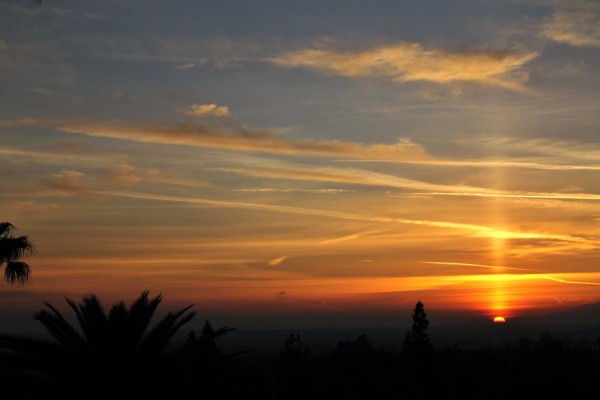 The U.S. West Coast got an amazing sun pillar on the first evening of spring 2016. Photo by Lyle Evans in Highland, California. 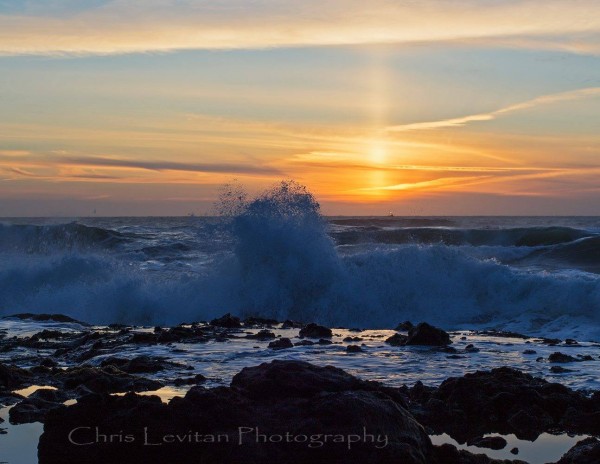 Another shot of the beautiful sun pillar seen on March 20, 2016, from the U.S. West Coast. This one is from Chris Levitan Photography. Thanks, Chris!

Sun pillars or light pillars are formed by reflection from hexagonal plate-like ice crystals in Earth’s air. These crystals drift through the atmosphere with a horizontal orientation, gently rocking from side to side as they fall. Diagram via University of Illinois. 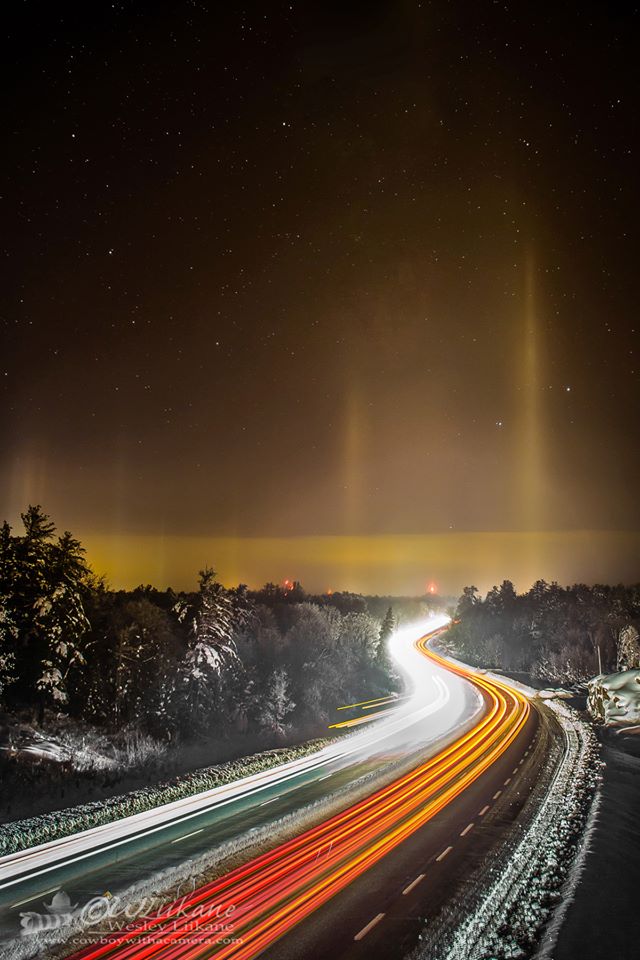 View larger. | Wesley Liikane in Severn Bridge, Ontario captured these light pillars on December 23, 2013. See more photos by Wesley at Cowboy with a Camera on Facebook. 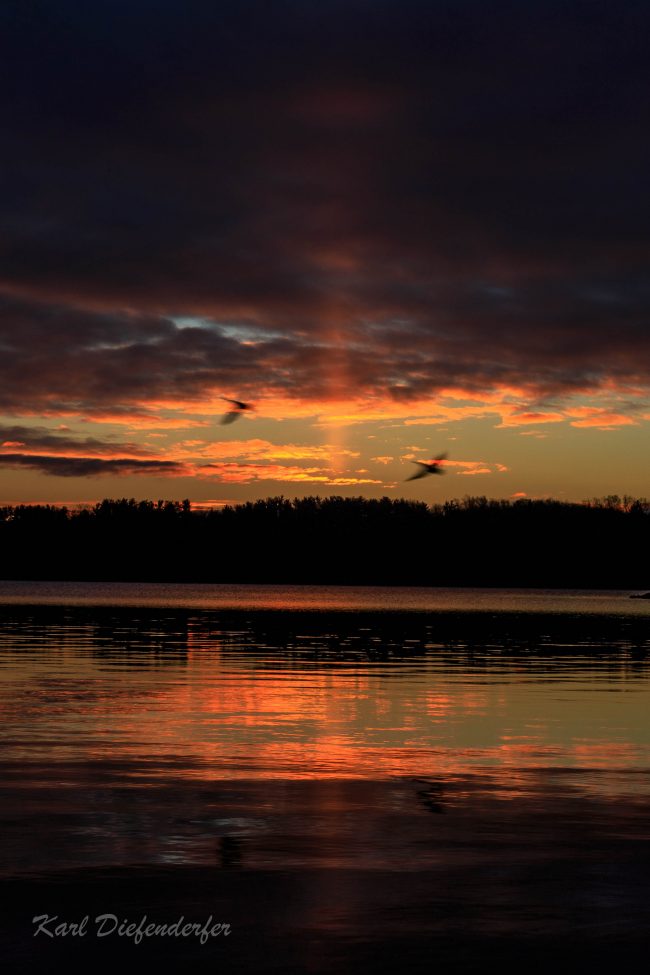 Canada geese look like ghosts as they fly though a sun pillar – January 28, 2017 – in Quakertown, Pennsylvania. 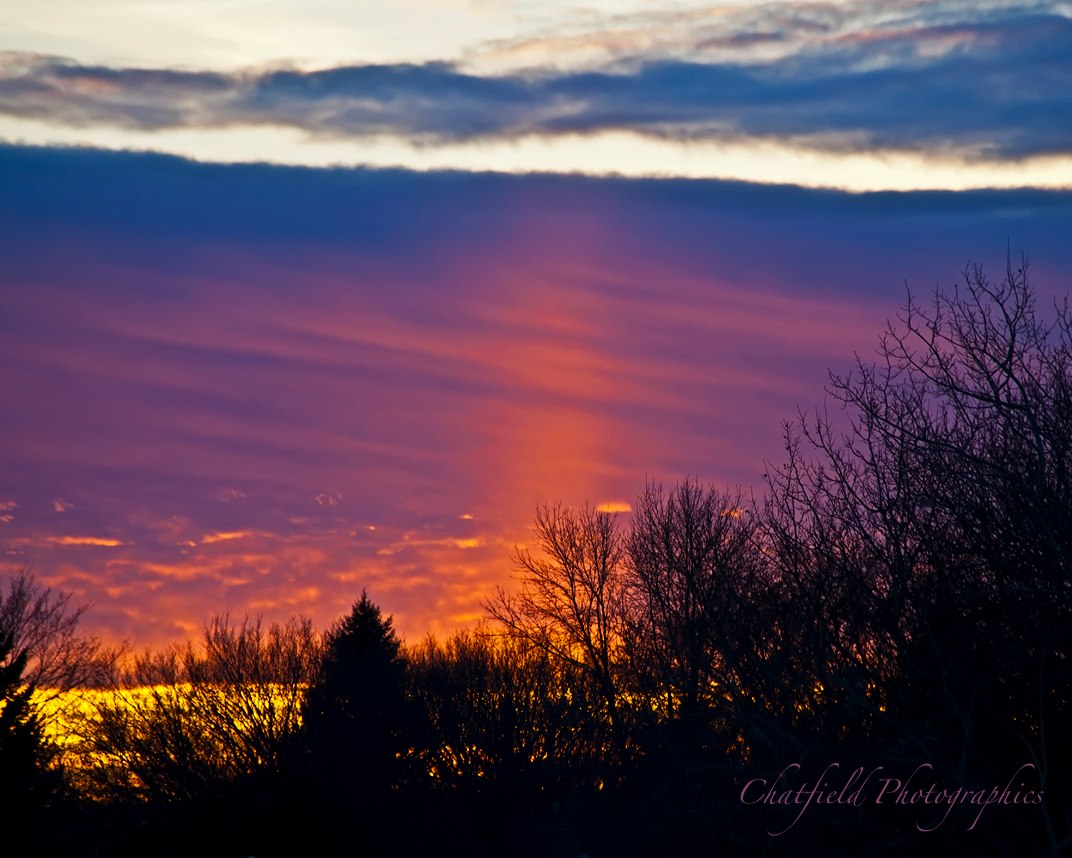 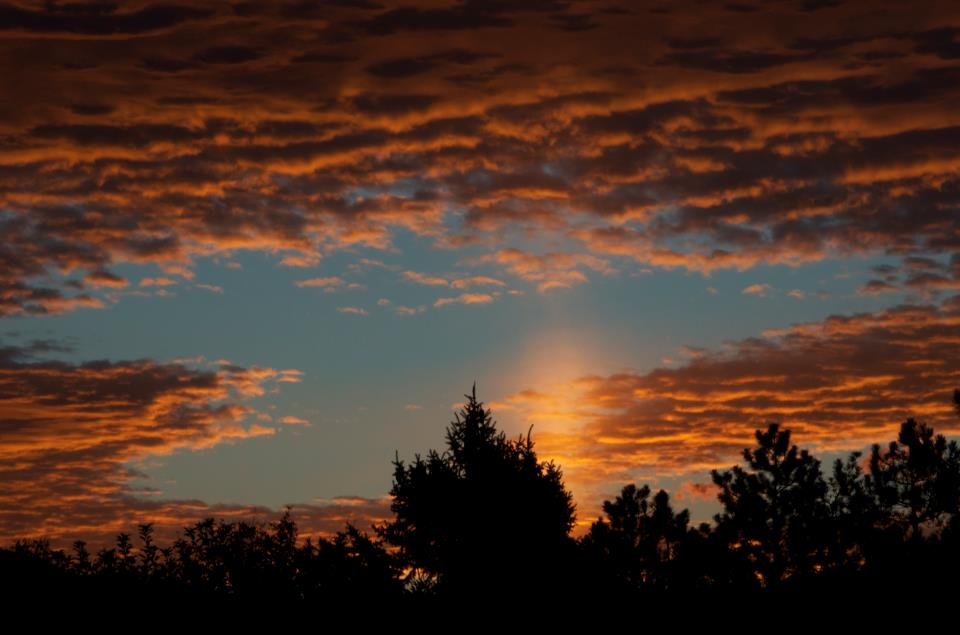 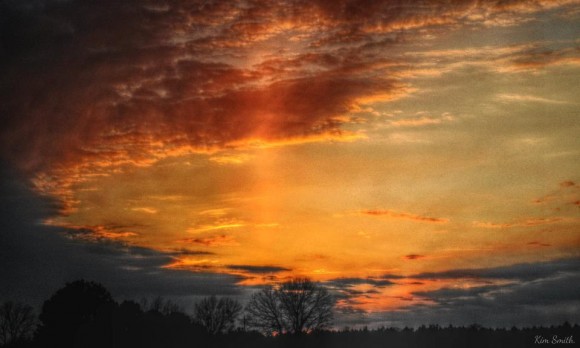 Photo via EarthSky Facebook friend Kim Smith, taken in February 2013. She wrote: “My first ever sun pillar! We don’t often see them here in Walker Creek, Arkansas. I am glad I was out to photograph the sunset today when this occurred.” Thanks, Kim!

Bottom line: In the right conditions, vertical shafts of light can be seen extending upward or downward from the sun or other bright light sources. These are called sun pillars, or light pillars, and are caused by light reflecting from hexagonal ice crystals drifting in Earth’s atmosphere.