Humpback whales have ever-changing and evolving songs. But a new study of whales in Alaska shows their repertoire of calls – including growls, trumpets, and ahoogas – remains more stable. Why? 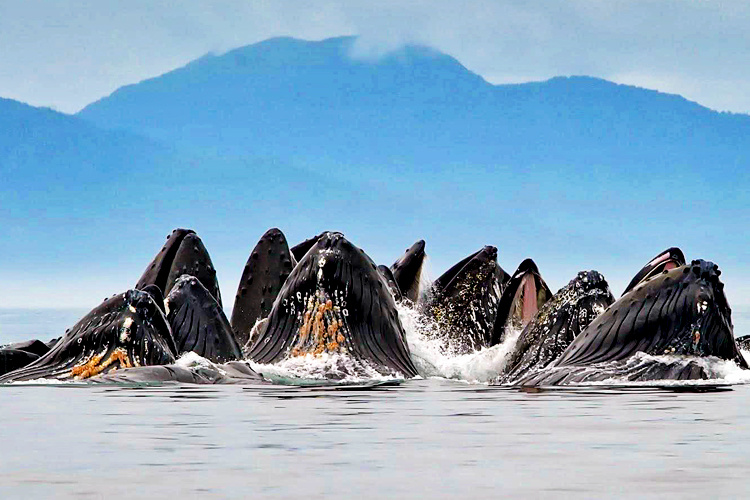 Humpback whales feeding off the coast of southeastern Alaska. A new study of humpbacks in this region shows their calls are passed from generation to generation. Image via NOAA.

Since 1971, when Roger Payne and Scott McVay first described the “surprisingly beautiful sounds” made by humpback whales in the journal Science – at the same time inventing the term whale songs – people have been fascinated by the vocalizations of whales. Humpback whales were the first species known to have songs, and their songs remain the best studied today. Male humpbacks sing, sometimes in unison, in warm equatorial waters during the mating season. The songs are eerie, haunting, and, in the course of a single season, they evolve. Meanwhile, the other sounds of whales – known as calls – don’t change, or at least don’t change very rapidly, according to a new study of humpback whales in southeastern Alaska. Instead, the new study shows, some whale calls, at least, are passed down across generations.

Michelle Fournet is a Ph.D. student at Oregon State University in Corvallis, and an acoustic ecologist. She led the new work, which was published in the peer-reviewed journal Nature’s online supplement Scientific Reports on September 27, 2018. She told DiscoverMagazine.com:

We are just now beginning to understand ‘the other side’ of humpback whale communication, and it is very different from what males sing on breeding grounds.

Whale songs are long and repetitive; the repetition is, in part, what first drew scientists to them.

Whale calls include other vocal sounds produced outside the patterned and repeated structure of a song. Whale calls might include grunts and groans, “thwops” and “trumpets” and “barks” and “snorts,” not to mention “ahoogas.”

Why do whales make these sounds? Are they communicating? Scientists like Michelle Fournet and her colleagues are curious to find out.

They found that – in contrast to whale songs, which change frequently – some whale calls didn’t change over the decades-long period studied. Their statement said:

Of 16 humpback whale call types produced in southeast Alaska, the authors found that 12 were detected in both 1976 and 2012, demonstrating the persistence of these calls over 36 years. The researchers found eight call types that were present in all four decades, and every call type was present in at least three decades.

The stability of whale calls across generations compared to the changing nature of whale song suggests whale calls may have a different purpose that requires them to remain the same; for example, organizing the social structure of whale groups or coordinating foraging.

Stability may therefore be as important in calls as novelty is in whale song, which plays an important role in mating.

This isn’t Fournet’s first whale study. Previously, she found humpback whales that forage in the North Atlantic also make many of the same kinds of calls as humpbacks in the North Pacific, even though the two populations haven’t interacted in 2 to 3 million years. She said:

[That] is an indication that [the calls] serve some important life function.

Bottom line: Michelle Fournet and colleagues at Oregon State University have learned that – in contrast to whale songs, which are constantly evolving – whale calls persist across generations.