An atmospheric scientist explains why water can do some strange-looking things at very cold temperatures, and what’s different about snowfalls on Mars. 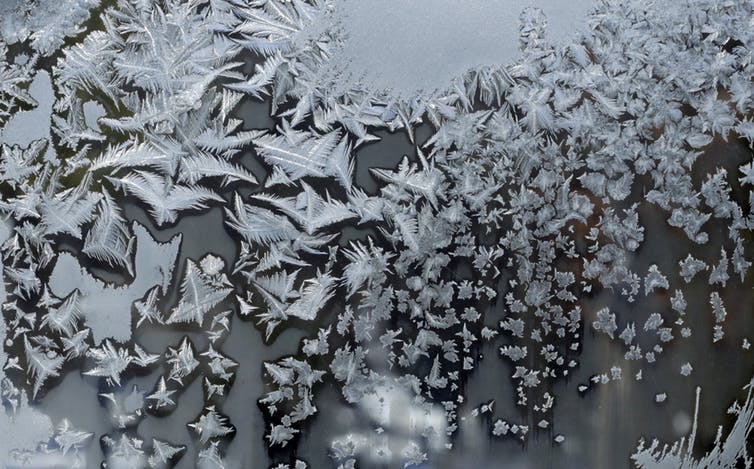 Why do lake and ocean waters appear to steam during cold snaps?

There are three phases, or states, of water: solid ice, liquid water and gaseous water vapor. Even in extremely cold weather, liquid water can’t be colder than the freezing point – about 32 degrees Fahrenheit (0 degrees C) – so the surface of the ocean is much warmer than the air above it.

A lot of water evaporates from the warmer ocean into the colder dry air above. As soon as this invisible gas rises even just a little bit above the relatively warm water, it hits air that is much colder and can’t hold much vapor, so the vapor condenses into microscopic droplets of liquid water in the air.

Some people call the wispy clouds caused by condensation just above the winter ocean or lakes sea smoke. That’s a better term than steam. Real steam is very hot water vapor – that is, water in its gas phase, which is invisible. 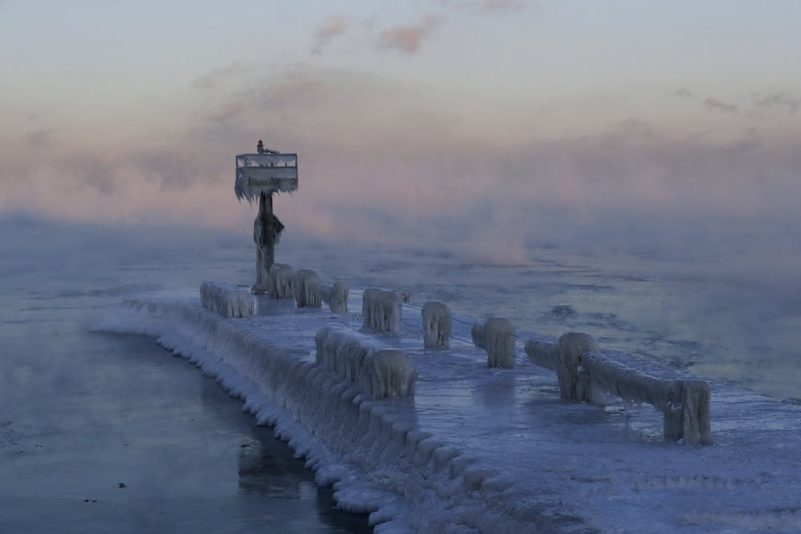 Weather watchers seem to get very excited about thundersnow. What is it and why is it rare?

Thunder is a sonic boom created when a lightning bolt causes the air to expand faster than the speed of sound. Lightning is formed by sparks of static electricity between the clouds and ground. The friction that forms this static is usually caused by rapidly rising thermals of buoyant air on hot summer days, which is why thunderstorms are common in summer.

Air can’t rise from the cold winter ground because cold air is dense, so thunder in winter is pretty unusual. Thundersnow happens when really cold air blows in from up north. This cold air is denser than the air at the surface, so it literally falls down, pushing surface air up over the top of it. This can create exactly the same kind of static charge as a summer thunderstorm, and BOOM – thundersnow! This only happens with a really dramatic change in temperature, such as the approach of an Arctic cold front.

How common is it for the oceans to freeze outside of the polar regions?

Saltwater has a lower freezing point than fresh water, which is why we put salt on our streets and sidewalks to melt ice in winter. Seawater is salty enough that it has to get really cold to freeze – around 28 F (-2.2 degrees C). It’s pretty unusual for seawater to freeze in the continental United States, though it happens all the time in the Arctic winter.

When seawater freezes, most of its salt is pushed down into the ocean water underneath it. This is why people in the Arctic can melt sea ice for drinking water. As little bits of freshwater ice form at the ocean’s surface, the remaining water gets saltier and saltier, so it gets harder and harder for it to freeze.

But sometimes when it’s been extremely cold, little ice floes form at the surface of the ocean. Waves break them up, so that the surface can become like a wavy slurpee. For anyone willing to brave the cold, it’s wild to stand by the shore and watch the smoking slushy sea with its slow-motion surf. At the poles, it’s so cold that floating ice crystals eventually converge and solidify into sea ice.

Scientists have found that Mars has snowfalls too. How are they different from snow on Earth?

The atmosphere on Mars is nearly pure carbon dioxide, which we know as the main greenhouse gas that’s driving climate change here on Earth. But Mars’ atmosphere is much thinner than ours, so it doesn’t trap much heat. On a nice Martian summer day, temperatures can reach 70 degrees F (21 degrees C) and then fall to -100 degrees F (-73 degrees C) the same night.

Winters are even colder there. It gets so cold in polar winters on Mars that the air itself freezes, making tiny carbon dioxide snowflakes the size of red blood cells, which pile deep enough to make polar caps of dry ice. 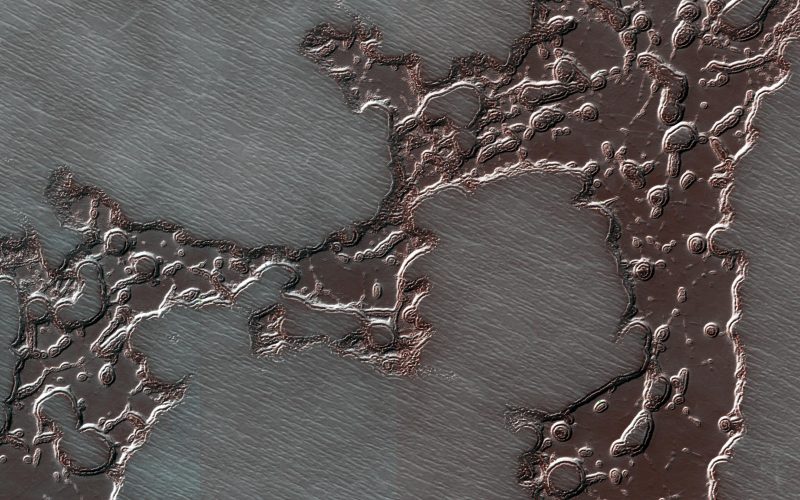 A mesa of frozen carbon dioxide at Mars’ south pole. Image via NASA.

During the long polar night, around 1/3 of Mars’ entire atmosphere falls as snow. This makes a partial vacuum, sucking the winds from the planet’s summer hemisphere to its winter hemisphere to make up the difference. In spring, these planet-scale winds reverse direction as the dry ice turns back to gas and starts to fall out on the other end of Mars.

Further out in the solar system, the “ice giant” planets and many of their moons have huge amounts of water and carbon dioxide ice – much larger quantities than all of our oceans. But on Earth, dry ice can’t form above -110 degrees F (-79 degrees C). So there will never be carbon dioxide snow on our planet – just frozen water in all of its many forms.

Bottom line: An atmospheric scientist explains some weird winter weather phenomena, such as thundersnow, steaming lakes, slurpee waves and why and what’s different about snowfalls on Mars.