Witness the birth of an iceberg

This iceberg broke off Greenland’s Helheim Glacier on June 22. If laid atop New York City, it’d stretch from lower Manhattan to Midtown.

On June 22, 2018, scientists captured on video a huge iceberg breaking away from the Helheim Glacier in eastern Greenland. The iceberg is 4 miles (6.4 km) long. If laid across North America’s largest city – New York – it’d stretch from lower Manhattan up to Midtown. The phenomenon of an iceberg breaking off a glacier is known as calving. This calving event began on June 22 at 11:30 p.m. local time. Although the video footage was later condensed to about 90 seconds, the event took place over approximately 30 minutes.

The video shows a tabular iceberg – one that’s wide and flat – calving off and moving away from the glacier. As it does so, thin and tall icebergs calve off and flip over.

The camera angle then shifts to show movement further down the fjord, where one tabular iceberg crashes into a second, causing the first to split into two and flip over.

Denise Holland of New York University (NYU) filmed the calving event. She said in a statement from NYU:

Knowing how and in what ways icebergs calve is important for simulations because they ultimately determine global sea-level rise. The better we understand what’s going on means we can create more accurate simulations to help predict and plan for climate change.

Global sea-level rise is both undeniable and consequential. By capturing how it unfolds, we can see, first-hand, its breath-taking significance. 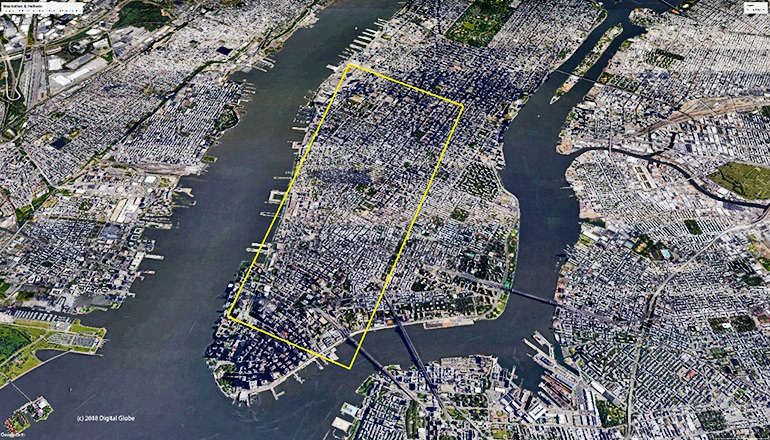 An iceberg that broke off from Greenland’s Helheim Glacier in June, 2018, would stretch from lower Manhattan up to Midtown in New York City. Image via Google Earth/Denise Holland.

Bottom line: Video of huge iceberg breaking off a Greenland glacier in June 2018.