Warming in deep ocean may be unprecedented, scientists say

Deep ocean waters below 700 meters have heated up unexpectedly since the year 2000, according to a new analysis.

A new analysis of long-term ocean warming trends has discovered that deep ocean waters below 700 meters (2,300 feet) have heated up unexpectedly since the year 2000. The research was published on May 10, 2013 in the journal Geophysical Research Letters.

The deep ocean warming appears to be unprecedented, the researchers say. They think that changes in surface wind patterns may be partly responsible for driving heat away from the surface layers and into deeper waters. 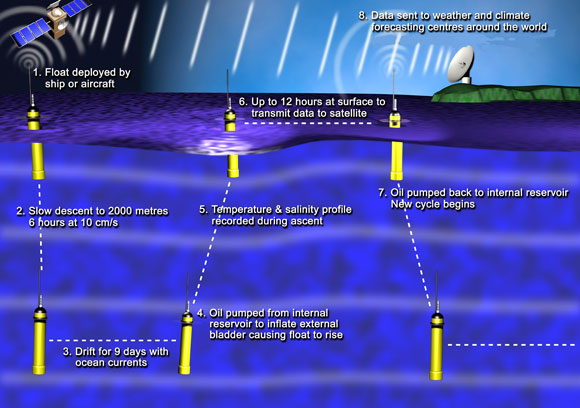 Sampling the deeper reaches of the ocean is challenging. In 2000, an international ocean observation program called Argo was developed to help gather data on temperature and salinity throughout the depths of the ocean. Argo is named after the ship sailed by Jason during his search for a golden ram’s fleece in Greek mythology.

To date, approximately 3000 floats have been deployed by the Argo program. These battery-powered floats are designed so that they sink to depths of about 2000 meters (6,600 feet) once they are deployed. After 10 days, fluid within a float is pumped into an external bladder and the float rises to the surface of the ocean. While at the surface, the floats transmit their location and the temperature and salinity data they have collected to satellites. Then, the bladder is deflated and the float sinks again. The floats are capable of completing up to 150 cycles per deployment.

Using data from the Argo program and other observatory programs, scientists were able to reconstruct and analyze global ocean temperature data at different depths over a period from 1958 to 2009. Overall, they observed a clear warming trend that started around 1975. The warming trend was punctuated by a few brief cooling episodes. Two of the cooling episodes were caused large volcanic eruptions including El Chichón in 1982 and Mount Pinatubo in 1991. A third cooling episode around 1998 is thought to be the consequence of heat discharge from a massive 1997–1998 El Niño event.

Since 2000, the warming of upper ocean waters has slowed somewhat, however deep ocean warming was detected at depths ranging from 700 to 2000 meters (2,300 to 6,600 feet). Such warming was not observed at earlier time points in their analyses. Changes in surface wind patterns, the scientists think, may be partly responsible for driving heat away from the surface layers and into deeper waters. 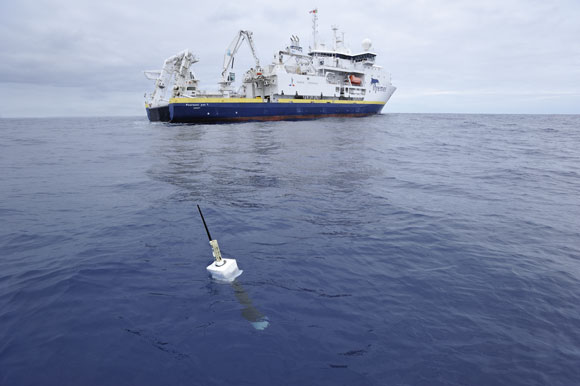 Deployment of an Argo float from the French R/V Pourquoi Pas. Image Credit: The Argo Program, part of the Global Ocean Observing System.

The ocean plays a critical role in absorbing extra atmospheric heat caused by increasing greenhouse gas emissions. Scientists estimate that the ocean has absorbed approximately 90% of the total heat that has been added to the climate system over the past 50 years. Heat that is not absorbed by the ocean contributes to melting ice and warming land and air temperatures. Observation data from the Argo program will likely be very valuable for determining how heat is accumulated on Earth in the years ahead.

Magdalena Balmaseda, lead author of the new study, is a scientist affiliated with the European Center for Medium Range Weather Forecasting (ECMRWF). Co-authors of the study included Kevin Trenberth from the National Center for Atmospheric Research in Boulder, Colorado and Erland Källén from ECMRWF.

Bottom line: A new study published on May 10, 2013 in the journal Geophysical Research Letters has discovered that deep ocean waters below 700 meters (2,300 feet) have heated up unexpectedly since the year 2000. The deep ocean warming appears to be unprecedented. Scientists think that changes in surface wind patterns may be partly responsible for driving heat away from the surface layers and into deeper waters.

Migrating animals add new depth to how the ocean breathes