The disease has spread from New York to Florida, with a total of 753 bottlenose dolphins washed ashore from July 1 until November 3.

A virus described as measles-like has been killing dolphins, and now whales, along the U.S. east coast in 2013. Bottlenose dolphins began dying of the virus in June of this year, and the virus has been steadily moving southward as the dolphins migrate south for winter. Now the disease has spread from New York to Florida, with a total of 753 bottlenose dolphins washed ashore from July 1 until November 3, according to the National Oceanic and Atmospheric Administration (NOAA).

Historic averages for this same time frame, in the same geographic area, is only 74. NOAA said on its website:

… an Unusual Mortality Event (UME) has been declared for bottlenose dolphins in the Mid-Atlantic region from early July 2013 through the present. Elevated strandings of bottlenose dolphins have occurred in New York, New Jersey, Delaware, Maryland, Virginia, North Carolina and South Carolina.

All age classes of bottlenose dolphins are involved and strandings range from a few live animals to mostly dead animals with many very decomposed. Many dolphins have presented with lesions on their skin, mouth, joints, or lungs. 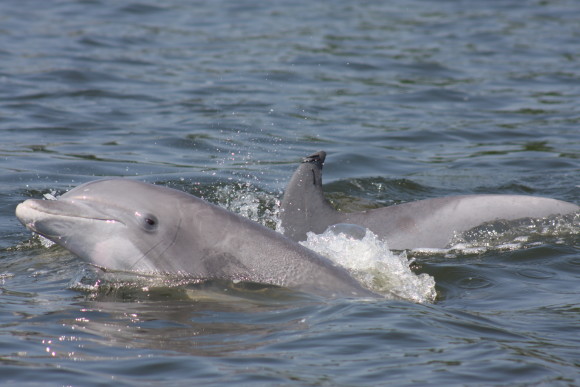 Bottlenose dolphins are suffering from a virus, along the U.S. east coast. Image via NOAA. 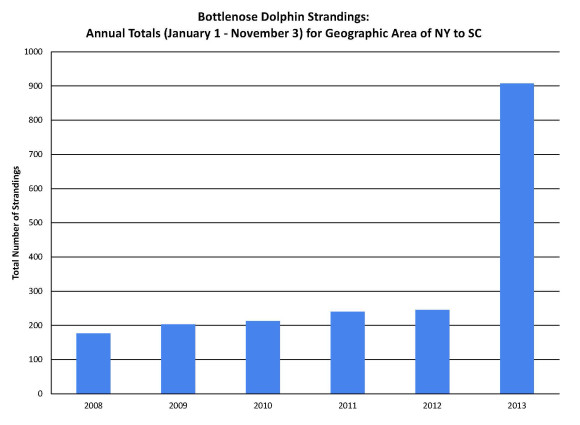 According to NOAA and based on preliminary diagnostic testing and discussion with disease experts, the tentative cause of the strandings is cetacean morbillivirus.

The Outer Banks Voice (a publication of the Outer Banks Marine Mammal Stranding Network) reported on November 4 that initial results of a necropsy showed the dolphin-killing virus as a suspect in the death of a 30-foot humpback whale that stranded on Hatteras Island in October. Then on November 11, UPI reported that three stranded and decaying humpback whales and two pygmy whales in similar shape tested positive for the dolphin morbillivirus.

The dolphin virus is thought to spread through close contact or shared air.

There is no vaccine that can be deployed for a large bottlenose dolphin population or any cetacean species.

The last major dolphin stranding event along the U.S. east coast was in 1987-88. NOAA said:

It has been 25 years since the 1987-1988 bottlenose dolphin morbillivirus mortality event that occurred along the mid-Atlantic coast, involving over 740 animals and spanning from New Jersey to Florida. That massive die-off, along with a humpback whale mortality event in 1987 off the coast of Massachusetts and the 1989 Exxon Valdez oil spill prompted Congress to formally establish the Marine Mammal Health and Stranding Response Program with the specific instructions for the UME Program as Title IV of the MMPA.

Bottom line: Hundreds of bottlenose dolphins, and now several whales, have succumbed to a virus this year along the U.S. eastern seaboard.