View from space: Before and after California’s Springs Fire

Before and after images from NASA Landsat of the Springs Fire in southern California, which began May 2 and was 80% contained by May 6.

NASA has published before and after images from space of an explosive wildfire that raged in southern California this past week. The Springs Fire ignited on May 2, 2013. Unusually dry conditions and strong winds fueled it, so that it blazed through more than 28,000 acres of chaparral on the Santa Monica Mountains, forcing the closure of parts of Highway 101 and threatening thousands of homes in Camarillo, Newbury Park, and Thousand Oaks. Now, as seen by NASA’s Landsat, a huge burn scar can be seen across this area. 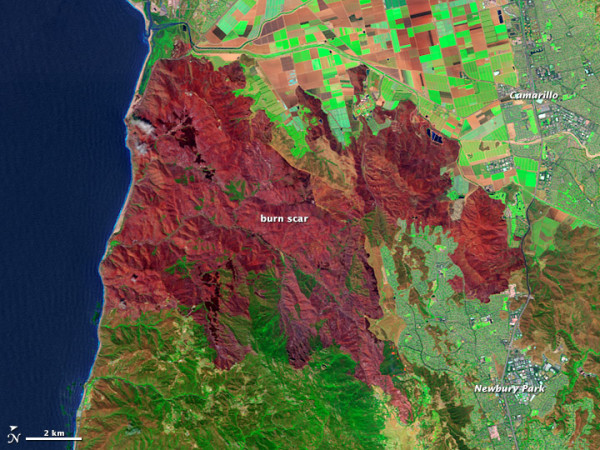 Burn scar left from California’s Springs Fire. Image via NASA Landsat on May 4, 2013.

For comparison, here is the same part of California in 2010, also seen by Landsat. 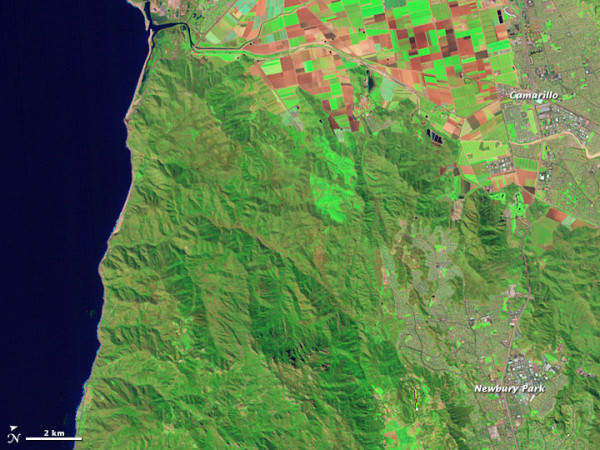 The same area of California as in the image above on March 18, 2010. Image via NASA Landsat.

By May 4, 2013, calmer winds and cooler temperatures finally let fire crews begin gaining control of the fast-moving Springs Fire. The fire reportedly scorched large swaths of rugged mountain terrain and forced mass evacuations, but the fire was 56% percent contained by May 4, and all mandatory evacuation orders were lifted.

By May 6, 2013, the Springs Fire was reported to be 80% contained after having charred 28,000 acres, destroyed 25 outbuildings and damaging 15 residences.

Read more about Springs Fire before and after images from NASA

Bottom line: Before and after images from NASA Landsat of the Springs Fire in southern California. It began on May 2, 2013 and was 80% contained by May 6. Unusually dry conditions and strong winds fueled it.