On May 3, 2013, NASA’s GOES satellite captured infrared and visible imagery used to create a 17-second animation showing a plume of smoke from California’s Springs Fire, as seen from space. 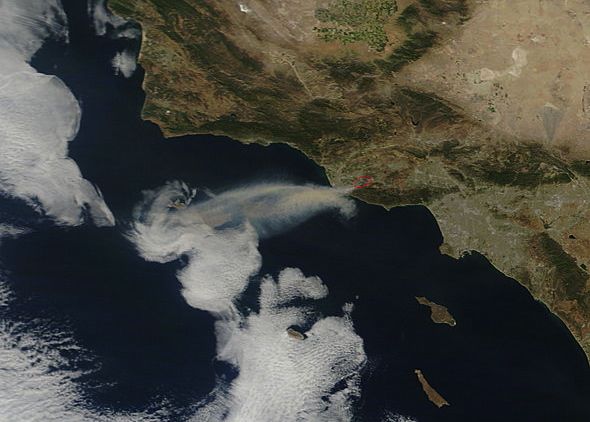 The LA Times reported on May 4, 2013 that calmer winds and cooler temperatures finally let fire crews begin gaining control of the fast-moving Springs Fire in California’s Ventura County. The fire reportedly scorched large swaths of rugged mountain terrain and forced mass evacuations, but the fire was 56% percent contained by May 4, and all mandatory evacuation orders were lifted.

Today – May 6, 2013 – the Springs Fire is reported to be 80% contained, according to Acuweather. The blaze charred 28,000 acres, destroyed 25 outbuildings and damaged 15 residences.

Bottom line: On May 3, 2013, NASA’s GOES satellite captured infrared and visible imagery used to create an animation showing a plume of smoke from California’s Springs Fire, as seen from space.