Posted by
Darcy Pattison
and

Two famous albatross chicks are thriving on Midway Atoll, the largest tropical bird rookery in the world. One is a Short-Tailed albatross chick, which I’ll call Golden, born on January 12, 2012. She is only the second recorded hatching of this species anywhere in the world, with the exception of two small Japanese islands.

Short-tailed albatrosses were once a thriving species with 5 million breeding pairs. Hunted for their eggs — the albumen, or egg white, was used in photography film — and for their decorative golden feathers, the species nearly went extinct 100 years ago.

Since then, conservation efforts have helped increase the population to an estimated 2,700 individuals. The largest breeding colony is on Torishima, literally meaning “Bird Island.” It is an uninhabited volcanic island not far from Japan and administered by Japan. The colony is not altogether safe on the island, because it has an active volcano. In 1939, an eruption buried the albatrosses’ main breeding grounds under 30 to 90 feet of lava, leaving only 10 nesting pairs. Another eruption would likely send the species back to the brink of extinction. The Short-tailed albatrosses also breed on Senkaku Island, also under Japanese control, located roughly due east of mainland China, northeast of Taiwan. But the colony on Senkaku is small. Japanese scientists have worked to establish another colony on Mukojima Island – one of over 30 islands located some 1,000 kilometers (620 miles) directly south of Tokyo. But, so far, no albatrosses have nested on Mukojima.

As part of the global conservation effort, Midway Atoll scientists also tried to attract Short-tailed albatrosses using recordings of an albatross colony and decoys. As early as 1938, Short-tail albatross individuals were sighted at Midway, but there were no reliable reports of nests. In 2008, a five-year-old female (banded as a fledgling in 2003) and 21-year-old male (banded as a fledgling in 1987) met on Midway and courted. Finally, they nested on Midway in 2011 and raised a chick. When the Japanese tsunami hit Midway, the waves washed the Short-Tail albatross chick more than 30 meters from its nest site. But the chick survived and eventually grew up and fledged.

This year’s chick, Golden, is just as exciting because the nesting pair has returned to Midway to raise another chick; it could mean the beginning of a new colony. The 2011 Japanese tsunami destroyed the recording and speaker system that broadcast the sounds of a Short-Tail Albatross colony. But the decoys remained and scientists were thrilled when the pair returned this year to nest again. So far this year, scientists have sighted five individual Short-tail albatrosses on Midway, a record number, making a second nesting pair a future possibility.

Wonder, the Laysan Albatross Chick with the Oldest Mother

The second famous chick of Midway was born to the oldest known wild bird in the world, Wisdom, a Laysan albatross, who was first banded on Midway in 1956. Presumed to be at least five years old when she was banded, scientists estimate that Wisdom has hatched over 35 eggs in her over 60 years, including every year since 2008. This year, Wisdom’s new chick hatched early in February 2012 and was immediately dubbed Wonder.

Wonder joins last year’s chick, who wears a red band #N333, in amazing the world. When the tsunami overran Midway at midnight on March 11, Wisdom’s nest was on high enough ground near Bravo Barracks that N333 was safe. But Wisdom couldn’t be found. Scientists waited eight days, nine days, and finally, on the tenth day, she returned to feed her chick.

The Laysan albatrosses of Midway are thriving and, while the situation for the Short-tailed albatrosses is still precarious, with the nesting pair returning to Midway for a second year, there is hope of a new colony. The latest threat— eating too much of the Japanese tsunami debris, predicted to be heading toward Midway — is just another danger that scientists will be monitoring. Wonder and Golden and their species depend on the Pacific Ocean for food and habitat and anything happening in the Pacific potentially impacts them.

We will probably be banding Wisdom’s chicks from now on. It’s a rare chance to follow generations.

It’s a note of hope that there will be many more generations of Short-Tailed and Laysan albatrosses soaring over Midway and across the Pacific.

Keep up with the albatrosses on Midway Atoll 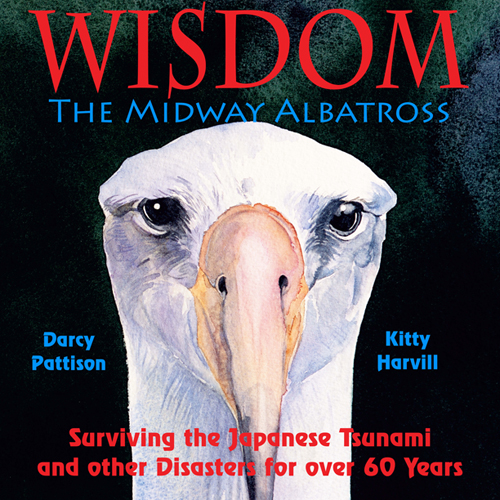 Editor’s Note: The story of Wisdom’s remarkable long life and survival in the wild is the subject of a new children’s picture book by Darcy Pattison, with watercolor illustrations by wildlife artist, Kitty Harvill. Wisdom, the Midway Albatross: Surviving the Japanese Tsunami and other Dangers for Over 60 Years (ISBN 9780979862175) discusses Wisdom’s long life from 1951 to present.

Bottom line: On Midway Atoll, a Laysan albatross colony is thriving. The situation for the Short-tailed albatrosses is still precarious. But new chicks have been born to both species in 2012.

Thank you! Your submission has been received!
Oops! Something went wrong while submitting the form.
END_OF_DOCUMENT_TOKEN_TO_BE_REPLACED