Tropical Storm Lee produced wildfires in Texas, tornadoes in the Southeast, and significant flooding from Louisiana northeast into New York.

Tropical Storm Lee made landfall along the southern coast of Louisiana on September 4, 2011. Lee produced locally heavy rainfall and tornadoes across the southeast.  Lee also affected parts of Texas by bringing dry air and windy conditions which were perfect ingredients for the wildfires burning uncontrollably throughout central Texas.

By September 6, Lee was losing tropical characteristics to become an extra-tropical low.  To be a tropical system, it has to develop a warm core.  When it loses tropical characteristics, it simply loses the warm core and transitions to our typical low pressure systems that we see on land. As Lee was transitioning, it merged with a stalled cold front and produced heavy rains across Pennsylvania, Maryland, and New York which resulted in major flooding across the eastern coast of the United States. 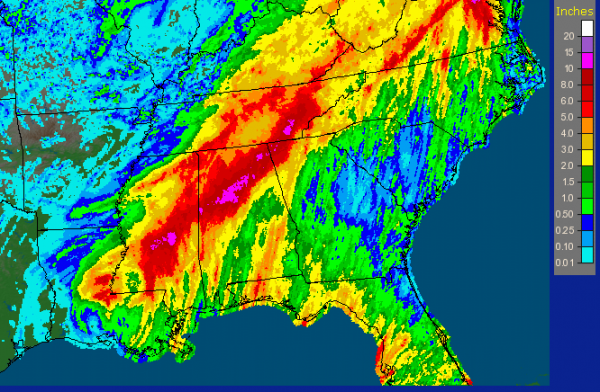 Tropical Storm Lee produced at least 12 inches of rain across Louisiana and Mississippi, and continued to produce over five inches of rain in Alabama, northwest Georgia, and into the Mid-Atlantic states.  Fortunately, the southeast United States has been experiencing a drought, so a lot of places could handle two to four inches of rain easily. 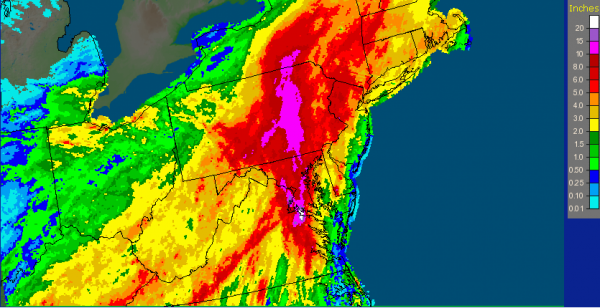 Here are some of the heaviest rainfall totals (in inches) from the National Weather Service found across the United States in association with Lee:

It has been reported that Lee dropped nearly 29 trillion gallons of water, which was about twice as much rainfall than the region experienced with Hurricane Irene two weeks ago.  Many areas experienced historical flooding that isolated neighborhoods and cities, preventing people from entering and leaving.  At least a dozen people died from Tropical Storm Lee, and it affected millions across the East Coast.  Swatera Creek in Pennsylvania rose more than 20 feet above flood stage, causing significant flooding to communities, stores, and businesses.  The combination of heavy rain this summer – tropical downpours from Hurricane Irene and the remnants of Lee – provided a nightmare scenario for many with flooding becoming the biggest threat.

Tropical Storm Lee also produced a lot of small tornadoes as it moved to the northeast. An EF-1 tornado with winds around 90 miles per hour caused damage in Holly Springs, Georgia (Cherokee County) on September 5, 2011. No deaths were reported, but there was roof damage and plenty of trees falling in the area. According to the Weather Channel, Lee spawned around 38 tornadoes and is ranked second behind 2008’s Tropical Storm Fay as the most prolific tornado-producing tropical storm.

Another weather-related issue involved with Tropical Storm Lee was the out-of-control wildfires across central Texas.  Since low pressure moves counterclockwise in the Northern Hemisphere, Texas was getting northerly winds which brought cooler temperatures and extremely dry weather to the region. However, the gradient between a ridge of high pressure and Lee produced strong northerly winds.  The combination of wind, dry air, and the extensive drought conditions across Texas created the perfect recipe for wildfires.  For more information regarding the wildfires in Texas, please visit our post: Texas still burning as winds die down.

Tropical Storm Lee produced wildfires in Texas, tornadoes in the Southeast, and significant flooding from Louisiana northeast into New York. Millions of people were affected, thousands stranded, as heavy rain and flood waters swamped roads, bridges, and city streets. As of now, the tropics are calming down.  We have already gone halfway through the 2011 Atlantic hurricane season, and the peak of the season was September 10.  Let’s hope it stays tranquil for the next two months.