Tracking Fukushima radiation across the Pacific

It took just over two years for the radioactive plume from Fukushima, Japan, to travel via ocean currents and reach the shores of North America, researchers say.

A radiation plume from the March, 2011 nuclear accident in Fukushima, Japan took about 2.1 years to travel via ocean currents and ultimately cross the waters of the Pacific Ocean to reach the shores of North America. That’s according to to a study published at the end of 2014 (December 29) by the Proceedings of the National Academy of Sciences,

Following the March 11, 2011 magnitude 9.0 earthquake and resulting tsunami in the Pacific Ocean, the Fukushima Daiichi nuclear power plant released cesium 134 and cesium 137 into the ocean. Researchers knew that a small percentage of this radioactive material would be carried by currents across the Pacific, eventually reaching the west coast of North America.

Computer models could predict when this might happen, but by taking actual samples of the ocean water and testing them for cesium 134 and cesium 137 the scientists could see for certain when it happened. 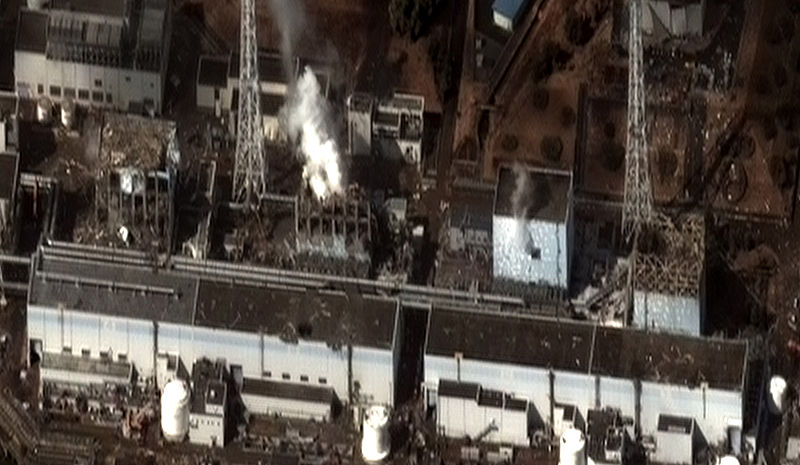 Three of the reactors at Fukushima Dai-ichi overheated, causing meltdowns that eventually led to explosions, which released large amounts of radioactive material into the air. Via Wikimedia

John Smith, a research scientist at the Bedford Institute of Oceanography in Dartmouth, Nova Scotia, is the lead author of the newly published paper. Smith said in a press release:

We had a situation where the radioactive tracer was deposited at a very specific location off the coast of Japan at a very specific time. It was kind of like a dye experiment. And it is unambiguous – you either see the signal or you don’t, and when you see it you know exactly what you are measuring.

Just three months after the tsunami, Smith and his team began sampling ocean water from as far as 1,500 kilometers (930 miles) off the coast of British Columbia. They took measurements from the same sites every June from 2011 to 2013, collecting 60 liters of water and then analyzing it for traces of cesium 134 and cesium 137.

In June of 2011 they detected no signature from the Fukushima disaster at any of the test sites. In June of 2012 they found small amounts of the Fukushima radiation at the westernmost station, but it had not moved any closer to shore. By June of 2013, however, it had spread all the way to the continental shelf of Canada.

The amount of radiation that finally made it to Canada’s west coast by June 2013 was very small – less than 1 Becquerels per cubic meter. (Becquerels are the number of decay events per second per 260 gallons of water.) That is more than 1,000 times lower than acceptable limits in drinking water, according to the Environmental Protection Agency.

Computer models that match fairly closely with the hard data that Smith collected suggest that the amount of radiation will peak in 2015 and 2016 in British Columbia, but it will never exceed about 5 Becquerels per cubic meter. Smith said:

Those levels of cesium 137 are still well below natural levels of radioactivity in the ocean.

Because of the structure of the currents, the radiation levels in Southern California are expected to peak a few years later, but by that time they will be even smaller than the highest levels of radiation expected in Canada.

Ken Buesseler is a marine chemist at Woods Hole Oceanographic Institute. Although he was not involved in this study, he leads a citizen scientist group called Our Radioactive Oceans, whose goal was to track the arrival of the Fukushima radioactivity plume in the U.S. He noted that his group’s results matched Smith’s and said:

Even when levels are small like this, it is important to collect systematic data so we can better predict how another event might move through the ocean.

What we really need for understanding what happens after events like Fukushima is data like this on a regular basis.

Bottom line: A radiation plume from the March, 2011 nuclear accident in Fukushima, Japan took about 2.1 years to travel via Pacific Ocean currents and reach the shores of North America, according to a study published on December 29, 2014 by the Proceedings of the National Academy of Sciences,