On January 21, 1968, in what came to be known as the Thule incident, a U.S. jet carrying 4 nuclear bombs crashed in Greenland, spreading radioactive wreckage across 3 square miles of a frozen fjord. 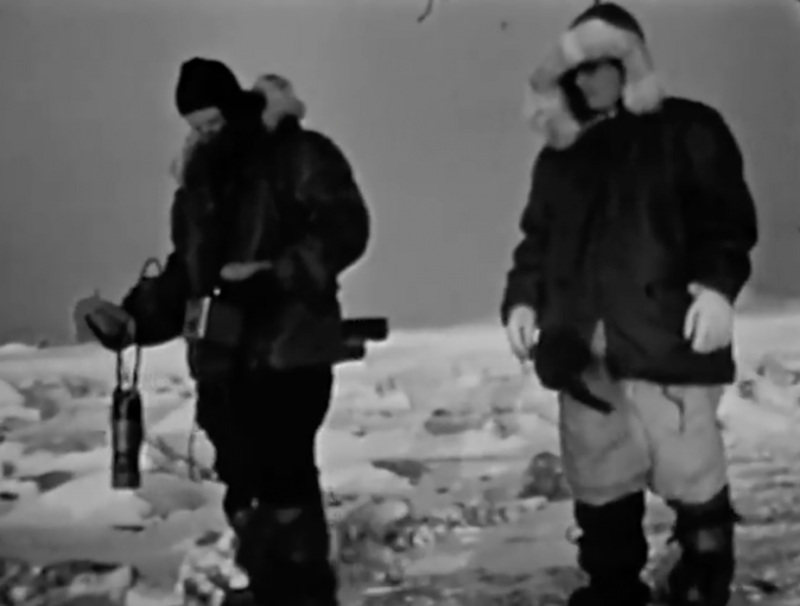 Fifty years ago, on January 21, 1968, the Cold War grew significantly colder. It was on this day that an American B-52G Stratofortress bomber, carrying four nuclear bombs, crashed onto the sea ice of Wolstenholme Fjord in the northwest corner of Greenland, one of the coldest places on Earth. Greenland is part of the Kingdom of Denmark, and the Danes were not pleased.

The bomber – call sign HOBO 28 – had crashed due to human error. One of the crew members had stuffed some seat cushions in front of a heating vent, and they subsequently caught fire. The smoke quickly became so thick that the crew needed to eject. Six of the 7 crew members parachuted out safely before the plane crashed onto the frozen fjord 7 miles west of Thule Air Base – America’s most northern military base, 700 miles north of the Arctic Circle. 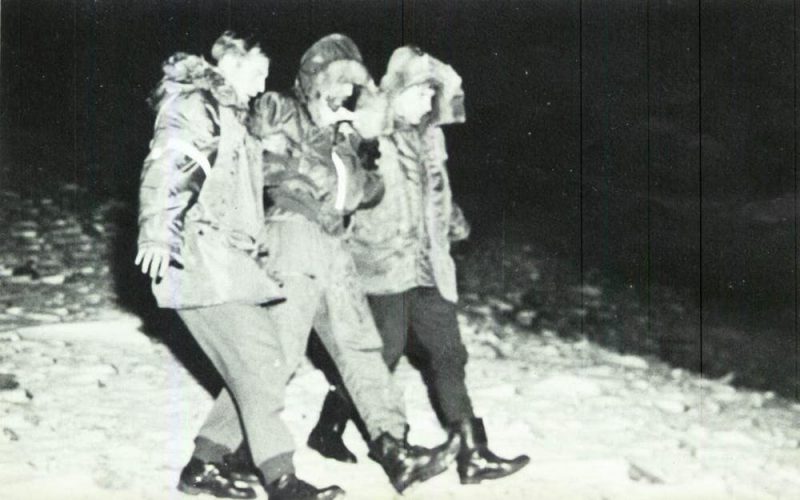 The ejected gunner is helped to safety. Image via U.S. Air Force.

The crash severely strained the United States’ relationship with Denmark, since Denmark’s 1957 nuclear-free zone policy had prohibited the presence of any nuclear weapons in Denmark or its territories. The Thule crash revealed that the United States had actually been routinely flying planes carrying nuclear bombs over Greenland, and one of those illicit flights had now resulted in the radioactive contamination of a fjord.

The radioactivity was released because the nuclear warheads had been compromised. The impact from the crash and the subsequent fire had broken open the weapons and released their radioactive contents, but luckily, there was no nuclear detonation.

To be specific, HOBO 28’s nuclear weapons were actually hydrogen bombs. As I explain in my book, “Strange Glow: The Story of Radiation,” a hydrogen bomb (or H-bomb) is a second-generation type of nuclear weapon that is much more powerful than the two atomic bombs dropped on Hiroshima and Nagasaki. Those two bombs were “fission” bombs – bombs that get their energy from the splitting (fission) of very large atoms (such as uranium and plutonium) into smaller atoms.

In contrast, HOBO 28’s bombs were fusion bombs – bombs that get their energy from the union (fusion) of the very small nuclei of hydrogen atoms. Each of the four Mark 28 F1 hydrogen bombs that HOBO 28 carried were nearly 100 times more powerful than the bomb dropped on Hiroshima (1,400 kilotons versus 15 kilotons).

Fusion bombs release so much more energy than fission bombs that it’s hard to comprehend. For example, if a fission bomb like Hiroshima’s were dropped on the Capitol building in Washington, D.C., it’s likely that the White House (about 1.5 miles away) would suffer little direct damage. In contrast, if just one of the Mark 28 F1 hydrogen bombs were dropped on the Capitol building, it would destroy the White House as well as everything else in Washington, D.C. (a destructive radius of about 7.5 miles). It is for this reason that North Korea’s recent claim of achieving hydrogen bomb capabilities is so very worrisome.

After the crash, the United States and Denmark had very different ideas about how to deal with HOBO 28’s wreckage and radioactivity. The U.S. wanted to just let the bomber wreckage sink into the fjord and remain there, but Denmark wouldn’t allow that. Denmark wanted all the wreckage gathered up immediately and moved, along with all of the radioactively contaminated ice, to the United States. Since the fate of the Thule Air Base hung in the balance, the U.S. agreed to Denmark’s demands.

The clock was ticking on the cleanup, code named operation “Crested Ice,” because, as winter turned into spring, the fjord would begin to melt and any remaining debris would sink 800 feet to the seafloor. Initial weather conditions were horrible, with temperatures as low as minus 75 degrees Fahrenheit, and wind speeds as high as 80 miles per hour. In addition, there was little sunlight, because the sun was not due to rise again over the Arctic horizon until mid-February.

Groups of American airmen, walking 50 abreast, swept the frozen fjord looking for all the pieces of wreckage – some as large as plane wings and some as small as flashlight batteries. Patches of ice with radioactive contamination were identified with Geiger counters and other types of radiation survey meters. All wreckage pieces were picked up, and ice showing any contamination was loaded into sealed tanks. Most every piece of the plane was accounted for except, most notably, a secondary stage cylinder of uranium and lithium deuteride – the nuclear fuel components of one of the bombs. It was not found on the ice and a sweep of the seafloor with a minisub also found nothing. Its current location remains a mystery. 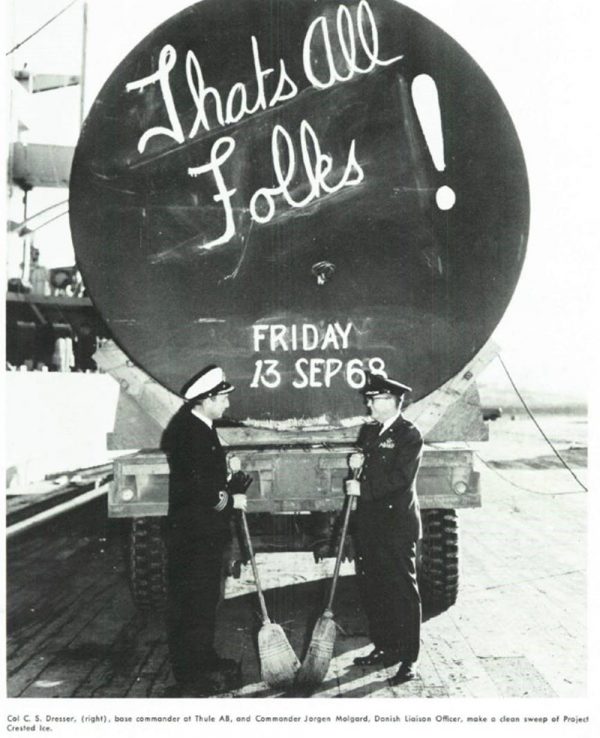 U.S. and Danish officials mark the end of the cleanup effort. Image via Royal Halloway University.

Although the loss of the fuel cylinder was perplexing and disturbing, it is a relatively small item (about the size and shape of a beer keg) and it emits very little radioactivity detectable by radiation survey meters, making it very hard to find at the bottom of a fjord. Fortunately, it is not possible for this secondary “fusion” unit to detonate on its own without first being induced through detonation of the primary “fission” unit (plutonium). So there is no chance of a spontaneous nuclear explosion occurring in the fjord in the future, no matter how long it remains there.

The successful cleanup helped to heal United States-Denmark relations. But nearly 30 years later, the Thule incident spawned a new political controversy in Denmark. In 1995, a Danish review of internal government documents revealed that Danish Prime Minister H.C. Hansen had actually given the United States tacit approval to fly nuclear weapons into Thule. Thus, the Danish government had to share some complicity in the Thule incident.

As recently as 2003, environmental scientists from Denmark revisited the fjord to see if they could detect any residual radioactivity from the crash. Was bottom sediment, seawater or seaweed radioactive, after nearly 40 years? Yes, but the levels were extremely low.

Thule Air Base survived all of the controversies over the decades but became increasingly neglected as nuclear weaponry moved away from bomber-based weapon delivery and more toward land-based and submarine-based intercontinental ballistic missiles. Nevertheless, as Thule’s bomber role waned, its importance for radar detection of incoming ICBMs grew, since a trans-Arctic trajectory is a direct route for Russian nuclear missiles targeted at the United States.

In 2017, Thule got a US$40,000,000 upgrade for its radar systems due, in part, to increased concern about Russia as a nuclear threat, and also because of worries about recent Russian military forays into the Arctic. Thule Air Base thus remains indispensable to American defense, and the United States remains very interested in Greenland – and committed to maintaining good relations with Denmark.