This zircon crystal is oldest known piece of Earth’s crust

A tiny zircon crystal found on a sheep station – or ranch – in western Australia is now the oldest known piece of our planet, dating to 4.4 billion years ago. 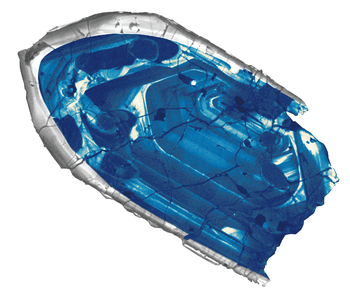 Scientists used two different age-determining techniques to analyze a tiny fragment of zircon extracted from a remote rock outcrop in Australia. The new study confirms that the zircon crystal, from Western Australia’s Jack Hills region, crystallized 4.4 billion years ago. This microscopic zircon crystal is now confirmed to be the oldest known material of any kind formed on Earth.

Writing in the February 23 issue of Nature Geoscience, an international team of researchers led by University of Wisconsin-Madison geoscience Professor John Valley says their data confirm the Earth’s crust first formed at least 4.4 billion years ago, just 160 million years after the formation of our solar system. The work shows, Valley says, that the time when our planet was a fiery ball covered in a magma ocean came earlier. 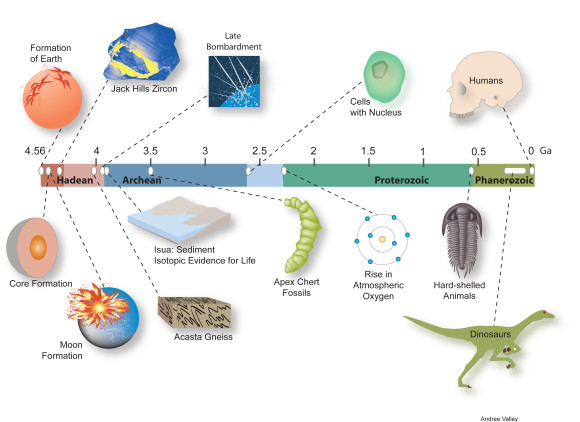 View larger. | A timeline of the history of our planet places the formation of the Jack Hills zircon and a “cool early Earth” at 4.4 billion years. Image credit: Andree Valley/University of Wisconsin

The study, according to Valley, strengthens the theory of a “cool early Earth,” where temperatures were low enough for liquid water, oceans and a hydrosphere not long after the planet’s crust congealed from a sea of molten rock. “The study reinforces our conclusion that Earth had a hydrosphere before 4.3 billion years ago,” and possibly life not long after, says Valley.

Bottom line: Scientists used two different age-determining techniques to analyze a tiny zircon crystal found on a sheep station – or ranch – in western Australia. The University of Wisconsin researchers say the zircon crystal is the oldest known piece of our planet, dating to 4.4 billion years ago.

Read more from the University of Wisconsin