These are von Kármán vortices 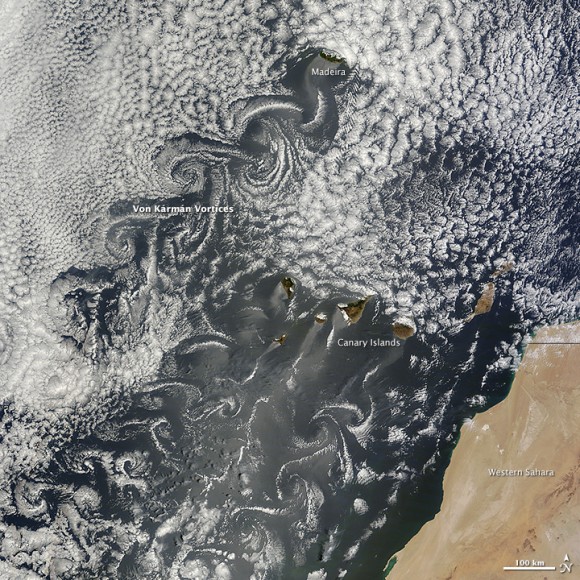 NASA’s Terra satellite captured this view of several cloud vortices swirling downwind of the Canary Islands and Madeira on May 20, 2015. Image credit: NASA

Theodore von Kármán (1881-1963), a Hungarian-American physicist, was the first to describe the physical processes that create long chains of spiral eddies like the ones shown above. Known as von Kármán vortices, the patterns can form nearly anywhere that fluid flow is disturbed by an object. In this case, the unique flow occurs as winds rush past the tall peaks on the volcanic islands. As winds are diverted around these high areas, the disturbance in the flow propagates downstream in the form of vortices that alternate their direction of rotation.

Satellite sensors have spotted von Kármán vortices around the globe before, including off of Guadalupe Island, near the coast of Chile, in the Greenland Sea, in the Arctic, and even next to a tropical storm. The scene above is particularly notable for the fact that three distinct streams of vortices are visible. 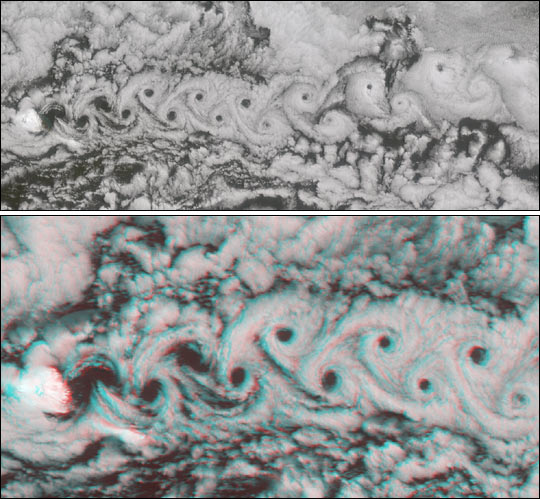 These turbulence patterns are known as von Karman vortex streets. In these images from NASA’s Multi-angle Imaging SpectroRadiometer, an impressive vortex pattern continues for over 300 km southward of Jan Mayen island. Jan Mayen is an isolated territory of Norway, located about 650 km northeast of Iceland in the north Atlantic Ocean. Jan Mayen’s Beerenberg volcano rises about 2.2 km above the ocean surface, providing a significant impediment to wind flow. June 6, 2001. Image credit: NASA

von Karman vortices form nearly everywhere that fluid flow is disturbed by an object. In the cloud images shown on this page, the “object” that is disturbing the fluid flow is an island or group of islands. As a prevailing wind encounters the island, the disturbance in the flow propagates downstream of the island in the form of a double row of vortices which alternate their direction of rotation. The animation below (courtesy of Cesareo de la Rosa Siqueira at the University of Sao Paulo, Brazil) shows how a von Karman vortex street develops behind a cylinder moving through a fluid.

In the image below, an isolated Norwegian territory in the North Atlantic Ocean, called Jan Mayen Island, is responsible for the spiraling cloud pattern. The unique flow occurs when winds rushing from the north encounter Beerenberg Volcano, a snow-covered peak on the eastern end of the island that rises 2.2 kilometers (1.4 miles) above the sea surface. As winds pass around the volcano, the disturbance in the flow propagates downstream in the form of a double row of vortices that alternate their direction of rotation. 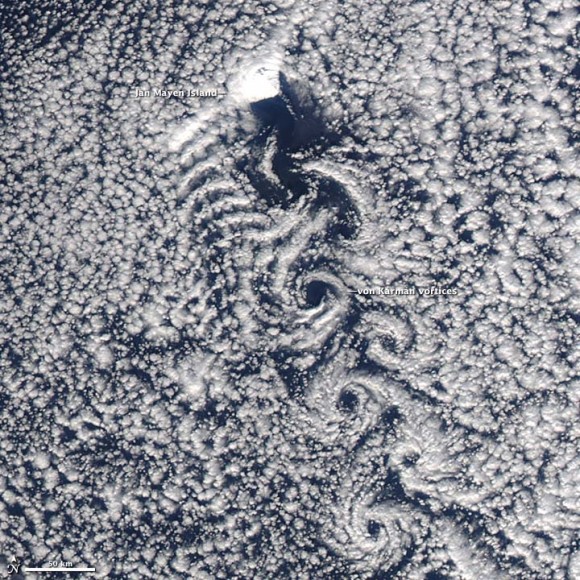