The March 2011 tsunami toll on wildlife at the Midway atoll

The March 11, 2011 tsunami took just 5 hours to travel the 2400 miles to Midway Atoll. There, it dealt a devastating blow to the island wildlife.

Much has already been said about the horrific earthquake and tsunami of March 11, 2011, at 2:46 pm Japan Standard Time. The toll on human life, and the decimation of coastal communities, infrastructure, and even farmland, is beyond imagination. The tsunami waves, created by a 9.0 magnitude earthquake about 80 miles (130 kilometers) off the coast of eastern Honshu, Japan, reached the closest land so rapidly that people had as little as 15 minutes to evacuate before waves sometimes reaching 30 feet in height (about 10 meters) thundered in, reaching as much as 6 miles (10 kilometers) inland. Tsunami waves also propagated across the Pacific Ocean, even triggering tsunami alerts on the western coastlines of North and South America. For the Midway Atoll, 2,400 miles from the epicenter, the waves arrived just 5 hours after the earthquake, inundating the low-lying islands, causing widespread destruction and wildlife mortality. Thankfully, there were no human casualties. 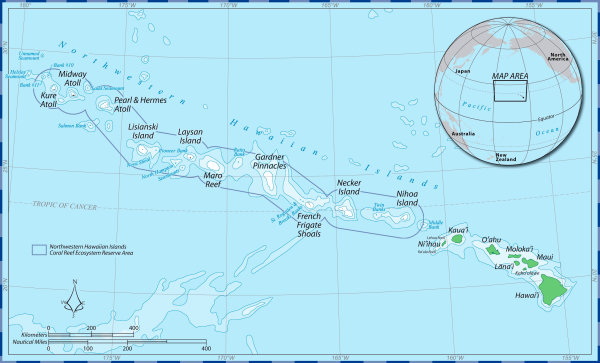 A map of the northwestern Hawaiian Islands chain. Click on the image to view a larger map. Image Credit: NOAA.

The Midway Atoll National Wildlife Refuge, which is within the Papah?naumoku?kea Marine National Monument, has three islands: Sand Island (1,117 acres), Eastern Island (366 acres), and Spit Island (15 acres). These islands are home to 21 species of seabirds, over three million birds in total. At the time of the tsunami, four species were nesting on the islands. There were 482,909 pairs of Laysan albatross, 28,581 pairs of black-footed albatross, and 1 pair of the endangered short-tailed albatross. There were also nesting Bonin petrels but because they nest in burrows in the sand, it was hard to determine their numbers. 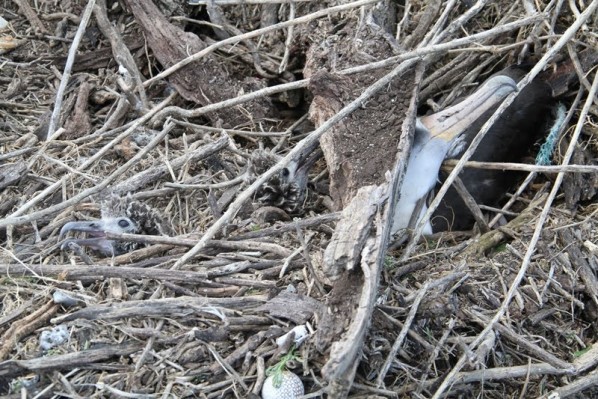 An adult albatross and two chicks were rescued from the debris. Photo Credit: Pete Leary/U.S. Fish and Wildlife Service. 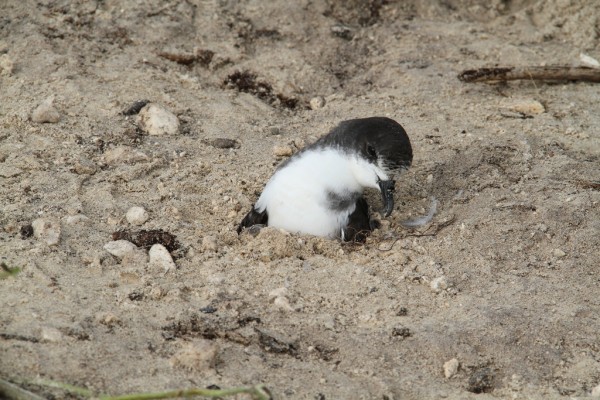 A Bonin petrel, half buried in the sand by the tsunami. It was rescued. Photo Credit: Pete Leary/U.S. Fish and Wildlife Service. 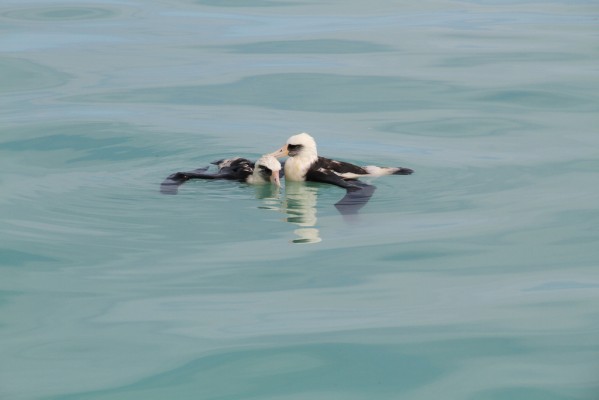 The waves pummeled the islands beginning just before midnight on March 10th. Four successive waves, the highest one almost 5 feet high, completely washed over the reefs and Spit Island, and inundated about 60% of Eastern Island and 20% of Sand Island. 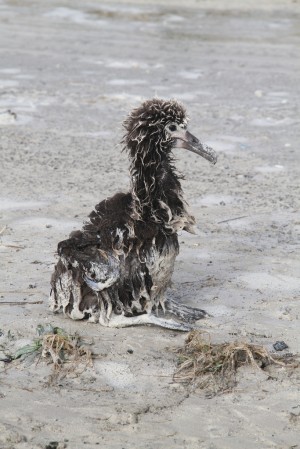 About 110,000 Laysan and black-footed albatross chicks were killed by the tsunami and two severe winter storms on January 14th and February 11th. Among them, the tsunami and the storms killed 22% of all chicks hatched this year. About 2,000 adult albatrosses were also killed. The worst-affected location was Spit Island: in January, there were 1,498 Laysan and 22 black-footed albatross nests, but after the winter storms and the tsunami, only 4 chicks remained.

It’s hard to know how many Bonin petrels were lost because they nest underground in burrows, but thousands of them are believed to have been buried alive when the tsunami washed over their burrows. Other seabird fatalities included red-tailed tropicbirds, red-footed boobies, and great frigatebirds.

A preliminary survey of the other Midway Atoll animal residents, such as the endangered Hawaiian monk seal, threatened Hawaiian green turtle, and various endangered Laysan duck species, indicated that they survived the tsunami. Three green turtles had been washed inland on Eastern Island but were returned alive to the sea. Neighboring islands within the Papah?naumoku?kea Marine National Monument likely suffered severe wildlife casualties as well, but because the islands were uninhabited at the time of the tsunami, not much is known about the extent of the destruction. There is concern for the ground-roosting endangered Laysan finches at Pearl and Hermes Reef because the tsunami likely washed over those low-lying islands.

A green sea turtle washed inland by the tsunami. It was returned to the ocean. Photo Credit: U.S. Fish and Wildlife Service.

After the tsunami passed, the staff at the Midway Atoll Refuge and some visitors began to rescue as many birds as they could, freeing about 300 birds that were trapped in debris or waterlogged at sea. The biologists also began to survey the damage. Said Barry Stieglitz, project leader for the Hawaiian and Pacific Islands National Wildlife Refuge Complex, in a press release,

The results were both startling and disheartening.

We are very fortunate not to have suffered any loss of human life or other tragedy, as have the people in Japan, and for that we are very grateful. But this tsunami was indeed a disaster at many levels, including for wildlife.

Assuming there are no other problems, the biologists feel confident that the albatross population will eventually recover. But, said Stieglitz,

We remain concerned about the compounding effect of this tsunami on the existing stresses of invasive species, global climate change, incidental mortality from longline fishing, and other threats to albatross and other wildlife populations. 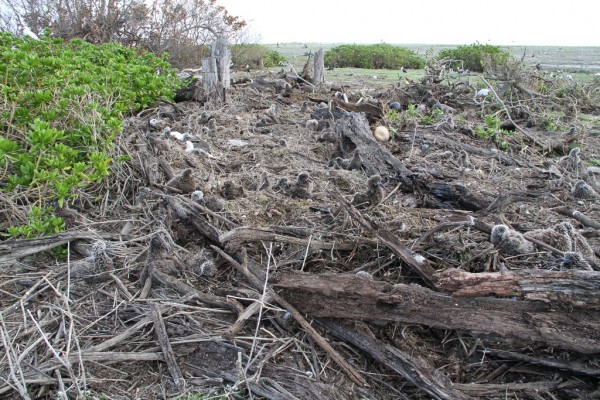 Laysan albatross chicks and adults washed up in a pile of debris. Photo Credit: Pete Leary/U.S. Fish and Wildlife Service.

In recent weeks – before the earthquake – the Midway Atoll National Wildlife Refuge had been in the news because of two significant developments in the albatross colony. It is home to the oldest known wild bird in the US, a Laysan albatross named Wisdom, who surprised many people by becoming a mother at about 60 years of age. There was also the first-ever documented nesting of a rare bird species, a pair of short-tailed albatrosses breeding outside of their native habitat in Japan; and they even produced a chick.

The short-tailed albatross chick survived the tsunami, but had been washed away about 100 feet from its nest. It was found by biologists and returned to its original location. However, the chick’s parents have not been seen since the tsunami; if they do not show up, the refuge will have to decide if it’s feasible to hand-rear the chick. (If there are any new developments regarding the short-tailed albatross chick, a comment will be posted at this blog and at the Earthsky Facebook page.) 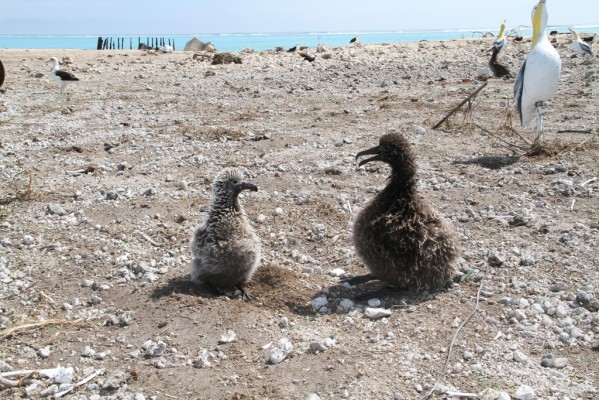 The nesting site of Wisdom, the Laysan albatross, was not affected by the tsunami surge. But there was concern for her because she hadn’t been seen for several days following the tsunami. Fortunately, to the relief of her many fans, Wisdom returned on March 20th, and was even photographed feeding her chick. 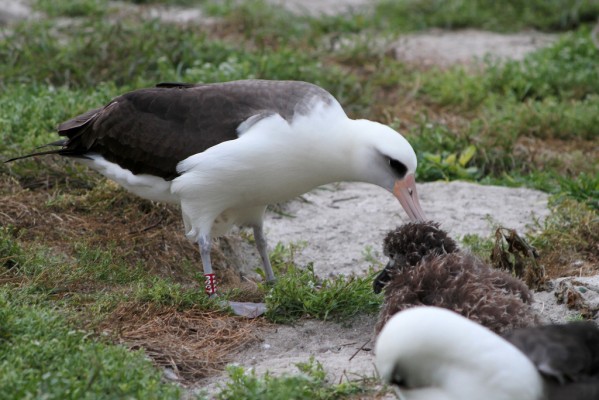 Wisdom, the 60-year-old Laysan albatross, returned to tend her chick after the tsunami. This photo was taken on March 20th. Photo Credit: Pete Leary/U.S. Fish and Wildlife Service.

The earthquake and tsunami of March 11th, 2011 had far-reaching effects across the Pacific. For islands just a few feet above sea level, the effect of the tsunami was devastating to wildlife that depend on that land for survival. What happened at Midway Atoll, about 2,400 miles from the earthquake epicenter, pales in comparison to the shocking events that unfolded in Japan. But it’s a story worthy of our attention because of how it affected our fragile ecosystem. The prognosis for the Laysan and black-footed albatross population looks promising, barring other catastrophes. As the ocean levels rise due to global warming, it’s clearly apparent how it will affect low-lying islands of the Pacific. More than 98% of the total population of nesting Laysan and black-footed albatross are found at the northwestern Hawaiian island chain that includes Midway Atoll. Unlike the tsunami, the slow inundation of rising sea levels will be permanent, and could very well cause the extinction of these and many other seabird species.

How the March 11 Japan tsunami spread across the Pacific

The passing and legacy of a parrot named Richard Henry

Dee Boersma: 2010 was a tough year for Punta Tombo penguins

Klaus Schulten on how birds navigate