The National Snow & Ice Data Center announced this past week (March 19, 2015) that 2014-2015’s Arctic sea ice maximum extent was the lowest yet recorded. In addition, sea ice likely hit its maximum extent nearly two weeks earlier than in recent decades, on February 25, 2015. It happened even as unusually cold air and stormy weather occurred across the eastern half of the United States and Canada this year.

Arctic sea ice always grows during the winter months with the greatest ice coverage around March 12 in a typical year of the past couple of decades. However, since February 25 of this year, Arctic sea ice has been melting. 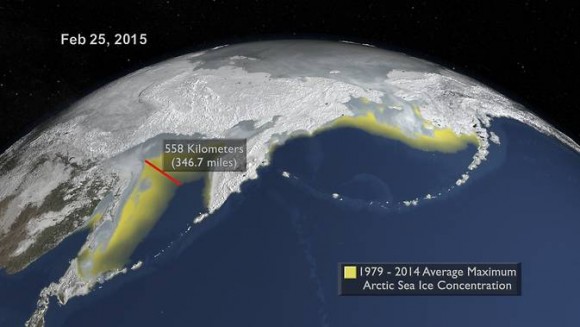 Here the 2015 maximum is compared to the 1979-2014 average maximum shown in yellow. A distance indicator shows the difference between the two in the Sea of Okhotsk north of Japan. Image via NASA’s Goddard Space Flight Center 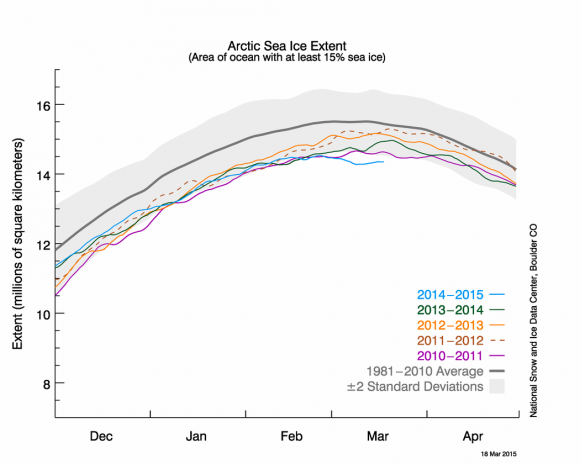 Every winter, Arctic sea ice grows as temperatures cool. Ice grows in the fall and winter months, and melts during the spring and summer months. This cycle always occurs, and, in the decades since 1979, scientists have been able to monitor the speed and growth of the ice over time. Sea ice grew to 14.54 million square kilometers (5.61 million square miles) on February 25, 2015. If we added an additional 1.10 million square kilometers (425,000 square miles) of sea ice to the Arctic right now, we would be at the average sea ice extent for the 1981-2010 period.

The lowest Arctic sea ice extent recorded before 2014-2015 was back in 2011-2012 when sea ice was 50,000 square miles greater at maximum than it was this year. According to Andrew Freedman of Mashable, the diminishment of sea ice this winter was an area equivalent to that of Texas and California combined. 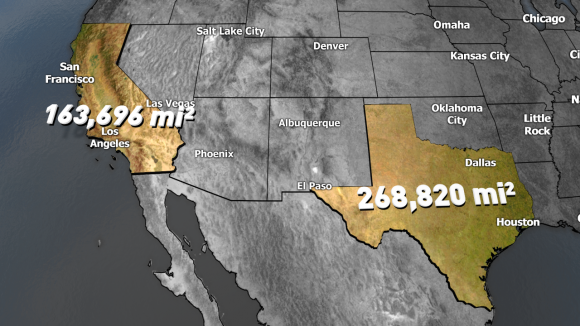 There was less Arctic sea ice in 2014-2015 winter – compared to the previous lowest maximum extent – by an area about the size of Texas and California combined. Image via WSI/MAX

It can be blamed upon the crazy jet stream pattern that formed across North America in February. Unusually cold air and stormy weather developed along the jet stream across the eastern half of the United States and Canada. Meanwhile, sunny and above average temperatures occurred across the western United States, Canada, and into Alaska. The highly amplified weather pattern supplied warm conditions over the Pacific side of the Arctic that brought upon low sea ice extent in the Bering Sea and the Sea of Okhotsk.

Finally, we were in a strong Arctic Oscillation, or weather pattern that brought upon warm, southerly winds across the eastern Arctic thanks to an area of low pressure situated across Iceland and southern Greenland and extending into the Barents Sea.

With such an amplified jet stream transferring cooler temperatures across the eastern half of the United States and Canada, it gave the Arctic very little room to stay cold and grow more sea ice extent. 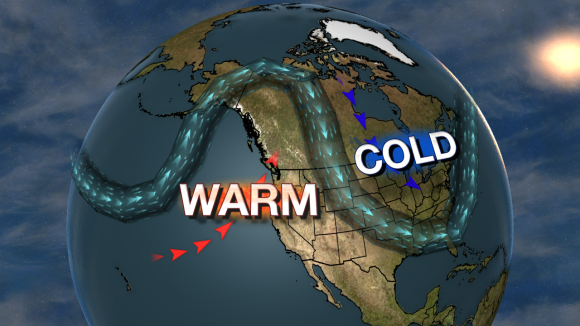 Jet stream orientation in winter 2015 was one reason Arctic Sea Ice was so puny this winter. Image via WSI/MAX

What does this mean about the sea ice extent as we head into the warm months? It’s still much too early to determine whether or not sea ice will reach a record minimum extent in 2015.

The extent of sea ice melt will depend on the thickness of the ice. Thin ice will melt faster. If there is more open water, the heat from the sun will be absorbed faster and sea ice melt could accelerate. It all depends on atmospheric features and what develops over the next several months. It is predicted that we could see an Arctic Ocean completely free of sea ice in the next couple of decades as carbon dioxide and greenhouse gases continue to grow and the planet warms as a whole. Melting of sea ice will not affect sea level rise, but it could result in unusual weather patterns across the Northern Hemisphere. 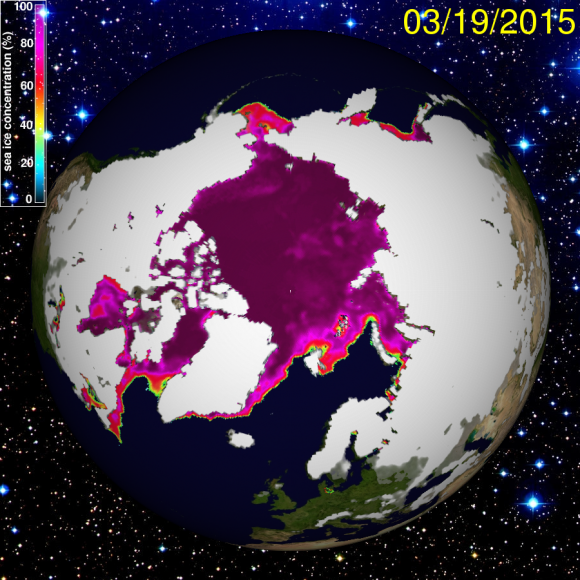 I constantly hear the zombie (walking dead!) declaration that Antarctica has the greatest sea ice extent since record-keeping began and, thus, the world as a whole cannot be warming.

While it’s true that Antarctica continues to have record sea ice extent, it’s important to note what that actually means. Sea ice is different than land ice. Melting of sea ice will not contribute to sea level rise. If you have ice melt in your glass of water, the volume stays the same.

Meanwhile, if you drop a bunch of ice cubes into your glass of water, the water level goes up. The same is true of sea level, and that is the real story of what’s happening in Antarctica in this century. In Antarctica, we are seeing glaciers and ice sheets melt into the sea.

The video below, from NASA, has more details about this year’s record sea ice Arctic sea ice extent. 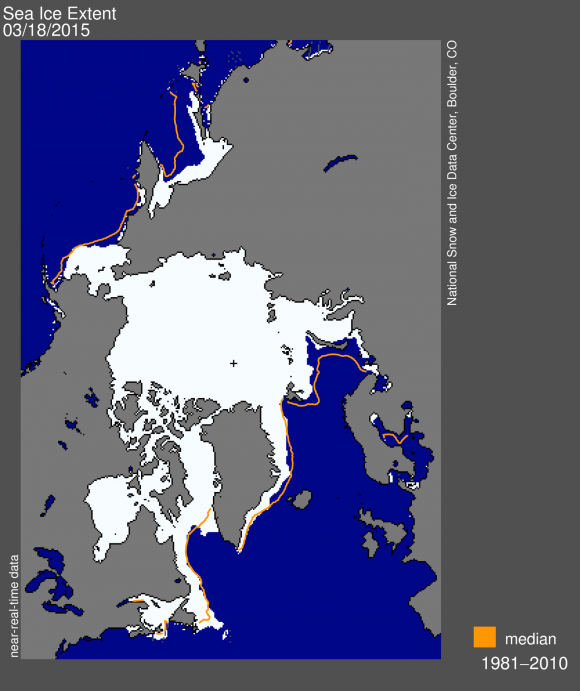 Bottom line: Arctic sea ice maximum extent was the lowest ever recorded at 5.61 million square miles on February 25, 2015. This year’s maximum took place 15 days earlier than the 1981-2010 average. 2015 thus beat the old record for smallest maximum extent of Arctic sea ice set back in 2011-2012. It is still uncertain as to what this might mean for Arctic sea ice in the warm months. Only time will tell.