Summer 2019 tied for hottest on record for Northern Hemisphere

June through August 2019 was the Northern Hemisphere’s hottest summer on record, tied with 2016. Meanwhile, in the Southern Hemisphere, the same period marked the 2nd-warmest winter in the 140-year record. 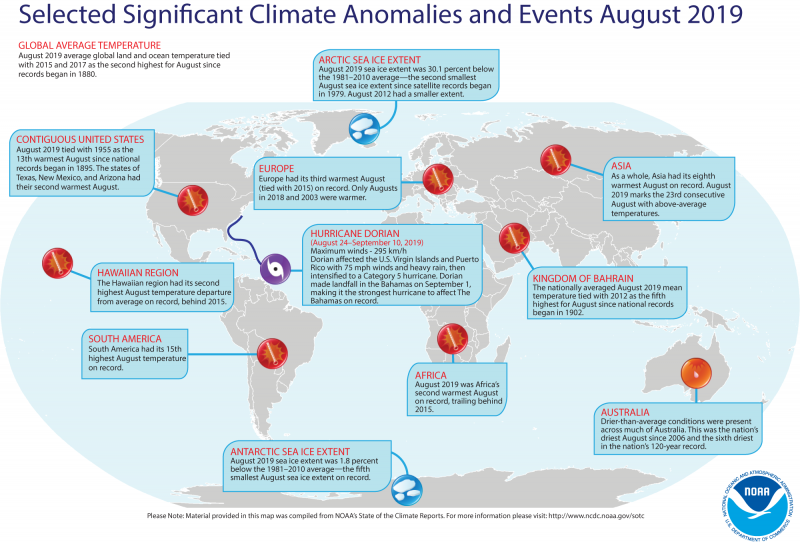 View larger. | Selected significant climate anomalies and events, August 2019. Scorching temps around the world made August 2019 the 2nd-hottest August on record, tied with 2015 and 2017. Image via NOAA.

In the shadow of the U.N.’s Climate Action Summit – set for Monday, September 23, 2019 – the U.S. National Oceanic and Atmospheric Administration (NOAA) has just released one of its periodic reports on global climate. Not surprisingly, given the trend of these reports for some years past now, the key word is hot. NOAA said in the report that the 2019 Northern Hemisphere meteorological summer (June through August) was the hottest in the 140-year climate record, tied with 2016. The 2019 Northern Hemisphere land and ocean surface temperatures for the period were 2.03 degrees F (1.13 degrees C) above average.

The last five June-August periods are the five hottest on record.

For the planet as a whole, NOAA reported that the period from January-August produced a global temperature that was 1.69 degrees F (.94 degrees C) above the 20th-century average of 57.3 degrees F (14.06 degrees C), making it the third hottest January-August period on record, after 2016 and 2017. The five warmest June-August periods have occurred in the last five years.

According to Andrew Freedman, the climate and environment editor at The Washington Post:

What’s remarkable about 2019’s record warmth is that it comes in the absence of a strong El Niño event in the tropical Pacific Ocean. Such events tend to boost global temperatures by warming the seas and sending more heat into the atmosphere. Instead, a weak El Niño has been present at times during 2019 but nothing like what occurred in 2016, which was the last time a Northern Hemisphere summer was this warm.

NOAA said that the most notable warm temperature departures from average during June-August 2019 happened across much of the high latitudes in the Northern Hemisphere, specifically across the North Pacific Ocean, the Bering Sea, western Alaska, northern Canada, central Europe and north-central Russia. And Africa had its warmest June-August on record. No land or ocean areas had a record-cold June-August 2019 temperature. 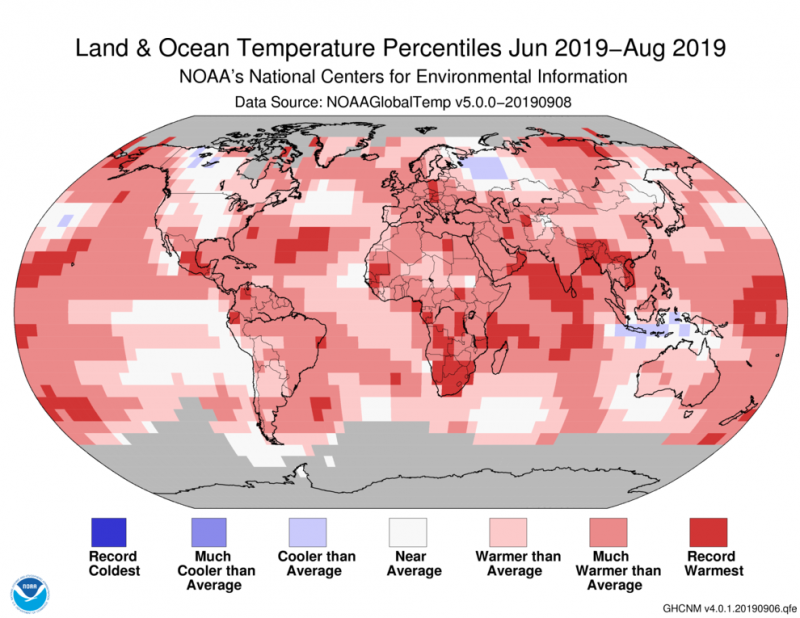 Bottom line: NOAA reports that the 2019 Northern Hemisphere summer (June-August) was the hottest in the 140-year climate record.