Summer 2018 – the months of June, July, and August – was the 4th hottest on record for the contiguous United States, according to a NOAA analysis 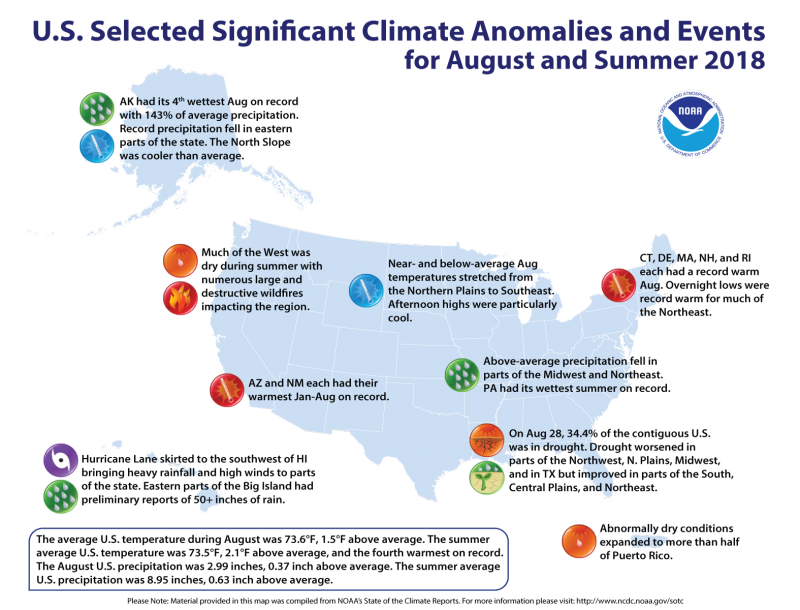 View larger. | An annotated map of the United States showing notable climate events that occurred in August and summer 2018. Image via NOAA NCEI.

A NOAA analysis released on Thursday (September 6, 2018), reported that this summer – the months of June, July, and August – was the fourth hottest on record for the contiguous United States.

During the 2018 meteorological summer (June through August), the average temperature for the contiguous U.S. was 73.5 degrees Fahrenheit (16.05 degrees Celsius), which is 2.1 degrees F above average.

According to the NOAA report, 23 states across the U.S. West, South and Northeast had much-above-average summer temperatures. The average overnight low summer temperature for the contiguous U.S. was 60.9 degrees F (16.96 degrees C), which is 2.5 degrees F above average and 0.1 degree F hotter than the previous record in 2016.

In August, Hurricane Lane drenched Hawaii. The storm brought massive flooding and extreme rainfall – preliminary reports of more than 50 inches (127 cm) – to parts of the Hawaiian Islands. This is Hurricane Lane on August 22, 2018. Image via NOAA.

Bottom line: A NOAA report says that summer 2018 was the 4th hottest on record.