While the global average number of tropical cyclones each year hasn’t budged from 86 over the last 4 decades, climate change has been influencing the locations of these deadly storms.

During one of the most active hurricane seasons in recent years, 3 simultaneous hurricanes – Katia, Irma and Jose – were captured in this satellite image on September 8, 2017. Image via NOAA.

Tropical cyclones are basically hurricanes by another name. Over the past 40 years, the global average number of tropical cyclones per year has stayed at 86, but global warming has been influencing where these deadly storms are happening. According to new study published May 4, 2020 in the peer-reviewed Proceedings of the National Academy of Sciences, the number of tropical cyclones has been rising since 1980 in the North Atlantic and Central Pacific, while storms have been declining in the Western Pacific and in the South Indian Ocean.

The researchers used climate models to determine that greenhouse gases, human-made aerosols – including particulate pollution- and volcanic eruptions were influencing where tropical cyclones were hitting. Hiroyuki Murakami is a climate researcher at NOAA’s Geophysical Fluid Dynamics Laboratory and lead author of the study. He said in a statement:

We show for the first time that this observed geographic pattern cannot be explained only by natural variability. 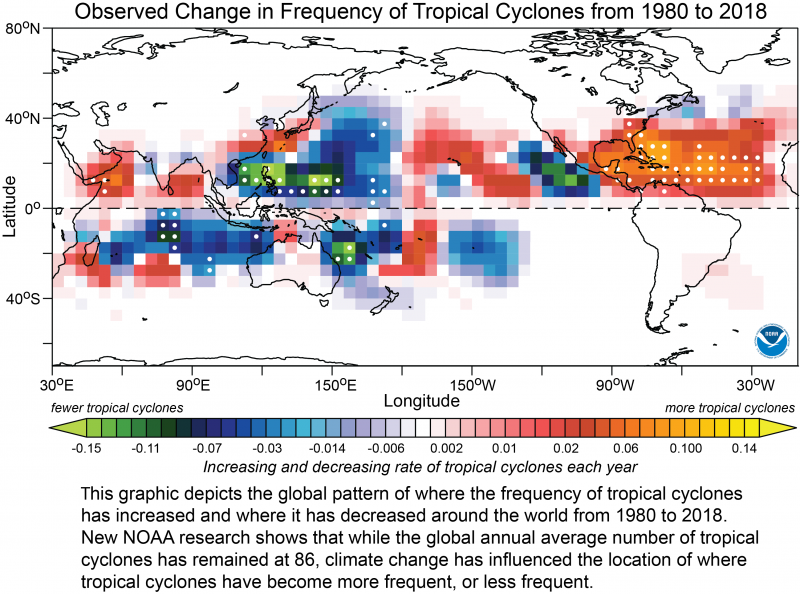 The researchers explained that greenhouse gases warming the upper atmosphere and the ocean combine to create a more stable atmosphere, with less chance that convection of air currents will help spawn and build up tropical cyclones.

In addition, particulate pollution – solid and liquid droplets suspended in the air – and other aerosols help create clouds and reflect sunlight away from the earth, causing cooling, Murakami said. The decline in particulate pollution due to pollution control measures may increase the warming of the ocean by allowing more sunlight to be absorbed by the ocean.

Volcanic eruptions have also altered the location of where tropical cyclones have occurred, according to the research:

Looking ahead, climate models project decreases in tropical cyclones toward the end of the 21st century, from the current annual average of 86 to about 69 worldwide, according to the new study. Declines are projected in most regions except in the Central Pacific, including Hawaii, where tropical cyclones activity is expected to increase. But despite a projected decline, many of these cyclones will be significantly more severe, say the researchers. Why? Rising sea surface temperatures fuel the intensity and destructiveness of tropical storms.

Bottom line: A new study says that although the global average number of tropical cyclones per year hasn’t changed for 40 years, climate change has been influencing the locations of these deadly storms.