Stormy weather is no match for microbes

Hearty microorganisms float in the harsh air of hailstorms and hurricanes.

Storm clouds aren’t the most hospitable of environments. The high altitudes, low temperatures, and strong winds are enough to discourage most reasonable organisms from taking up residence there. Oxygen is sparse, and the food isn’t to everyone’s liking – the offerings being mostly gases, ice crystals, and tiny particles of dust. Yet, according to two new studies, even in the harsh terrains within thunderstorms and hurricanes, some microbes manage to make themselves at home.

How exactly does one inventory the inside of a storm system? Well, there are a couple options. You could take the sane route and analyze a storm’s microbial population by sampling its output. Researchers in Denmark used this approach to examine a thunderstorm in Slovenia, gathering hailstones disgorged from its clouds.* Or you could just fly an airplane through a hurricane. No, really. That’s what a team from the Georgia Institute of Technology did to assess the microbial inhabitants of the upper troposphere. 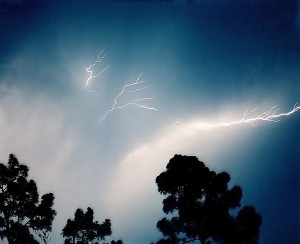 Bad day for a picnic. Image Kyle May.

Both methods have their pros and cons. Picking hail off the ground certainly sounds cheaper and less terrifying than chasing after storms in the air, but you’re limited to analyzing only those organisms that made their way back to terra firma. The people willing to take to the sky, on the other hand, were also able to sample storm-free and cloud-free conditions (their adventures in aviation spanned six weeks and two hurricanes – 2010’s Earl and Karl), which could tell us something about day-to-day microbial life in these extreme regions.

So what kind of microbes are living up there and potentially falling back to earth to smash into our windshields? Are we talking about methicillin-resistant Staphylococcus aureus? Neisseria gonorrhoeae perhaps? Should we be concerned?

Probably not. The hailstone study reported that most of the viable bacteria in the samples were taxa normally found on plant surfaces. (There were soil bacteria too, but they didn’t fare as well, more on that in a bit…) The samples taken with the aid of airplanes did turn up a few taxa associated with human or animal feces (Escherichia and Streptococcus). However, these were primarily seen in the hurricane samples, and even then they weren’t forming most of the bacterial bulk (marine and freshwater microbes accounted for more of the population). Additionally, the study was able to pin down genus but not species, so there’s no evidence that these were specifically the pathogenic variants of such bacteria.

Both studies found much variability in microbial populations. The hailstones study, looking at the output of a single storm, still saw differences from one hailstone to another. The flight study noted differences in samples across time and location, especially among those samples taken from the two hurricanes. Yet there were 17 taxa of microbes found in all of the aerial samples. These organisms could represent the relatively long-term residents of the troposphere, whereas the additional microbes in the hurricanes are more likely temporary visitors swept up by the storm.

Not all microbes have what it takes to live among the clouds. Analysis of hailstones revealed a large amount of soil-derived organic compounds (carbon and nitrogen based molecules) but, as mentioned, the viable bacteria were mostly plant-surface dwellers. This suggests that soil-dwelling bacteria could have entered the atmosphere only to be killed off by dry conditions and UV radiation, something the plant-surface bacteria are better equipped to withstand. Overall, only about ten percent of the bacteria recovered from hailstones could be motivated to resume growth back in the lab. The rest were either dead or permanently traumatized by the experience of being trapped in a ball of ice.

The flight study reported a larger proportion of viable microorganisms (over 60%), though some of these may have been on their way out. The samples collected in hurricanes contained more microbes overall (both viable and total). Hurricanes with their tumultuous winds scoop up plenty of new bacteria, but not all of these can endure for long.

For those that do survive the journey, being swept up into a storm could allow microbes to travel to and colonize new lands. Those that remain in the air may contribute to further cloud formation. Clouds are born when water in the air condenses and freezes around particles. These particles, or “cloud condensation nuclei” can be dust or soot, but also certain types of microbes. Samples taken in the flight study found that viable bacteria made up 20% of the total microscopic particles collected. That’s a lot of bacteria.** Remember that next time you’re lying on the grass admiring the clouds hovering overhead. And if it starts to rain, you might want to keep your mouth closed.

* Since hailstones can also pick up bacteria during their descent and while rolling around on the ground, the hail was thoroughly washed before being analyzed. To ensure that the washing was sufficient, the researchers tested the same technique on ice cubes (made with deionized water) that had been similarly sullied.

** There were some fungi mixed in as well, but bacteria were far more numerous.